Zimbabwe’s tobacco sales have reached a record high of 237.1 million kg with a week to go before the selling season ends, official data showed on Friday, raising hopes its second biggest export could help ease the country’s severe dollar shortage.

Growing demand from China, the world’s biggest smoking nation, and funding from private tobacco companies have boosted output, which plunged to its lowest in 2008.

Tobacco accounted for a quarter of Zimbabwe’s $3.8 billion in total export earnings in 2017, behind gold.

The sector was previously dominated by white farmers until they were forcibly evicted in a controversial government land seizure drive in 2000. Now tens of thousands of black farmers who benefited from the land reforms are growing tobacco.

Tobacco Industry and Marketing Board (TIMB) data showed that sales of the crop at local auctions had eclipsed the previous record of 236.9 million kg in 2000. Back then, 4,000 white farmers produced 85 percent of the crop.

TIMB spokesman Isheunesu Moyo said despite a mid-season drought in January, farmers exceeded expectation and “this ranks as the best year in terms of production.”

Zimbabwe is suffering from shortages of U.S. dollars, a big obstacle to businesses importing goods they need or repatriating the profits they hope to make, while portfolio investors can’t get their money out of the stock market.

After raging hyperinflation, Zimbabwe abandoned its currency in 2009 in favour of the dollar, but a widening trade deficit and lack of foreign investment have led to dollar shortages.

The nation of 13 million people will on July 30 hold its first presidential and parliamentary vote since Robert Mugabe was forced to resign after a coup amid expectation that this coul help unlock foreign funding if certified free and fair by the international community.

“The season went well because tobacco fetched good prices, so we go into the elections feeling happy. But the challenge was getting money from the banks,” small-scale farmer Terrence Sibindi told Reuters at a local auction.

Tobacco has become the biggest success story of the government’s land reforms, which Mugabe defended as necessary to correct skewed colonial land ownership. 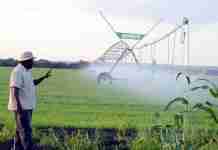