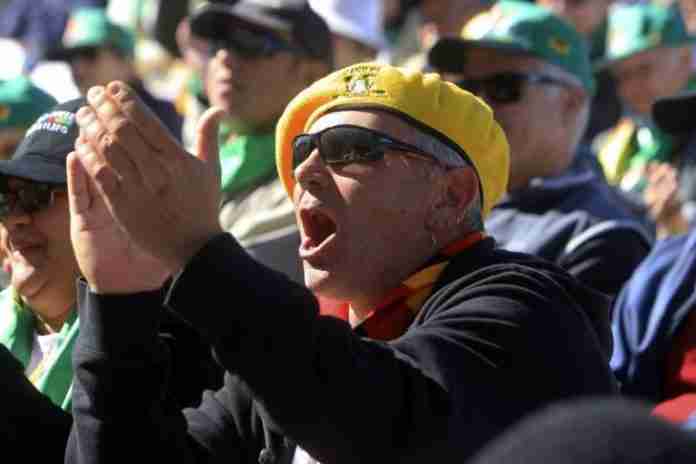 Once, it was the music of the Mbare Chimurenga Choir which told you that you were at a ZANU PF event. But on Saturday morning, on the pavilion of the Borrowdale Race Course, it was Phil Collins singing “In the air tonight” that showed how far from his predecessor Emmerson Mnangagwa is trying to steer the ruling party.

For two weeks, a group of white Zimbabweans, among them motocross racer Ryan Webb, had worked to set up a meeting with President Emmerson Mnangagwa. They had seen ZANU PF’s top leaders meet with other minority groups. In the last month, Vice President Constantino Chiwenga met Zimbabweans of Asian origin in Belvedere and coloureds in Arcadia. Earlier, VP Kembo Mohadi met the Muslim community at the City Sports Centre in Harare.

So Webb says he and others rallied whites and approached Mnangagwa for a meeting. The president agreed. The organisers quickly set up a venue, the Mashonaland Turf Club, the historical seat of old white capital. They organised their caterers and chairs.

In a WhatsApp group created for the meeting, David Coltart, a senior MDC Alliance official, tried to warn against the meeting, offering to arrange a meeting for whites with Nelson Chamisa instead. He was swiftly told to arrange a separate meeting, and some now plan a similar meeting with the opposition leader.

But Saturday showed sights we never imagined possible; white people, ZANU PF scarves around their necks, declaring their support for a ZANU PF leader. The last leader of this same party once declared, to cheers from supporters at the City Sports Centre in 2000: “Our party must continue to strike fear in the heart of the white man, our real enemy”.

This Saturday, Mugabe’s “enemy” didn’t look to be in much fear, exchanging gentle banter over sponge cake and tea as the PA System played Phil Collins and soft rock.

Times have changed. In 2000, Morgan Tsvangirai was filmed receiving cheques from white farmers at Banket Country Club. “I’m investing with the MDC,” a burley farmer was recorded saying. Mugabe and ZANU PF waved the video in front of the world as evidence that Tsvangirai wanted to hand the country back to whites. ZBC played the video repeatedly.

Since Tsvangirai was in league with whites, no elections would allow him to take power, ZANU PF vowed. “We should not demean the African struggles for liberation by using the fiction of democracy,” then Information Minister Jonathan Moyo declared in 2002.

For 20 years, anti-white rhetoric was at the core of ZANU PF campaigns. Much of it was hypocritical. Mugabe was himself a fan of British royalty, a lover of cricket and a stickler for colonial fare. When he wasn’t bashing imperialists, he was busy acting like them. Few things gave the man more pleasure than riding in that open-top Rolls Royce behind dozens of horsemen wielding lances, wearing white tights and gleaming boots. He maintained his own secret alliances with wealthy whites.

Mugabe’s white-bashing was shamelessly two-faced, but it helped ZANU PF find a viable campaign message to its core base at a time the party had run out of ideas to sell. That message has worked for years. Now, after decades of anti-white bashing, can Mnangagwa end that culture without confusing his party’s base?

The minorities that ZANU PF has been speaking to don’t represent large voting blocs on their own. The 2012 census showed that there were only 28 732 whites in Zimbabwe. There were just over 10 000 Zimbabweans of Asian origin and just under 18 000 people of mixed race in the country. Only one percent of the country are Muslims.

In a tight race, ZANU PF will obviously welcome every single vote. But for Mnangagwa, there are bigger prizes; getting himself some good international PR and securing the commercial influence of these groups. He needs both prizes for the Government that he hopes to form should he win Monday’s poll.

Already, while he was mocked at home for the “whites rally”, the global news headlines cast Mnangagwa in favourable light.

“Zimbabwe’s President Mnangagwa appeals for racial unity ahead of election,” said the BBC. Mnangagwa had “marked shift from his predecessor Robert Mugabe whose policies became increasingly racially divisive”, said Reuters. He had “pledged to fix racial divisions and end the violent seizure of white-owned commercial farms,” the news agency reported to its wide global audience. AP, the American news agency, ran the headline: “Era of land seizures is over, Mnangagwa tells whites at a rally in Harare”.

This has obviously played well internationally, but Mnangagwa still has to make sure this new cosy relationship with whites doesn’t isolate him from the ZANU PF base. He seems to recognise the risk. He told the white citizens that he regrets nothing about taking their land, something he repeated just hours later at a rally in Marondera.

“A farmer, a black farmer, a white farmer, is a Zimbabwean farmer”

Land reform would not be reversed, Mnangagwa declared, but race would no longer be a factor on the farms.

“We should cease to talk about who owns the farm in terms of colour. A farmer, a black farmer, a white farmer, is a Zimbabwean farmer,” he said, drawing cheers from the largely middle-aged crowd, which was subdued for much of his address.

This wasn’t new for Mnangagwa. He has always cast himself as a pal of white farmers and business, and this was always a source of friction with Mugabe.

In January 2016, at the funeral of a Kwekwe dairy farmer, Neville Coetzee, Mnangagwa again tried to set himself apart from his then boss. He said Midlands leaders had chosen not to take over dairy farms during land reform.

“Here in Midlands we stood our ground to avoid disruptions of the dairy industry and convinced the party leadership. As a result, Midlands is now the number one dairy producing province in the country,” he said.

Because of the decision taken by Mnangagwa, and the likes of the late Cephas Msipa, the Coetzees’ small dairy project has grown into one of Zimbabwe’s largest dairy firms, Dendairy. That won Mnangagwa some brownie points outside the party, but within ZanuPF this got him labelled a front for big white money.

This June, Mnangagwa made an unannounced stop at the ADMA Agri Show at Borrowdale Race Course. It was an event dominated by foreign suppliers of farm equipment, a record number of exhibitors, organisers said, among them Case IH, New Holland, John Deere, Hyundai and Massey Ferguson. Large numbers of white farmers attended. Mnangagwa wore a Case branded cap, and chatted with suppliers and farmers that he found having lunch.

After Saturday’s meeting, Mnangagwa, Chiwenga and Oppah Muchinguri mingled freely with the crowd. At one point, Mnangagwa shoved away his security detail, ordering them to give him some space so he could greet people. There were hugs and selfies, slaps on the back, handshakes and laughs. It was a stark contrast with the heightened security at his main rallies, where, after the White City attack, supporters now sit metres away from him behind a steel barricade.

Mnangagwa is doing the most to separate himself from Mugabe’s legacy by embracing former foes, from Western governments abroad to whites at home. What is unclear is whether Mnangagwa can do this successfully without separating himself from ZANU PF’s traditional base.

In 2004, then British Prime Minister Tony Blair, in the House of Commons, said he was “working with the MDC” to “put pressure for change on the Mugabe regime”. This was fodder for ZANU PF, and its MPs raised a motion to investigate the MDC for “treason”. Tsvangirai himself described Blair’s remarks as “unhelpful”.

Mugabe actually once ran an entire election campaign on an anti-British platform. At the launch rally of his 2005 campaign, there was a large banner proclaiming the poll an “Anti-Blair Election”. Under Mnangagwa, Britain is now considered an ally.

Mnangagwa has trashed Mugabe’s anti-Western podium-thumping for his “Open for Business” chorus. What other remnants of Mugabe’s rhetoric and ideology will Mnangagwa strip from ZANU PF, before the party is barely recognisable from the liberation movement that Mugabe led for almost 40 years?

It is not an easy battle for the ideological soul of a party founded over five decades ago to fight white rule.

On Saturday, there were two large banners at the “white rally”. One declared, “Fresh start with ED”, while another said “the past is gone, the future is ahead”.

That “past”, Robert Mugabe, a long-time seller of faux pan-Africanism, must be turning in his blue-roofed political grave.

For white Zimbabweans, they will be asking whether “ED” can really transform ZANU PF or whether, after elections, and much like Phil Collins, they will see Zanu PF’s true colours.

OPINION | Gold coins did their job, and we never planned to issue them...