There is no direct English translation for the word “kumusha.” In Shona, it means “your home, your origin, your roots.”

The term conjures the “feeling of belonging” rather than a physical place, explains Tinashe Nyamudoka, which is exactly why he christened his brand Kumusha Wines. “I want to embrace wine in my own space, within my own culture,” says Nyamudoka, the Zimbabwean native who, in the space of a decade, has become one of the most acclaimed sommeliers in South Africa.

“For Black Africans, wine is not historically part of our culture,” he says. “I wanted to create a wine to help change that.”

An Unlikely Journey to Wine

Raised in Zimbabwe, Nyamudoka had worked his way up to junior manager at a grocery store when his country fell into a crippling economic crisis. Like many other Zimbabweans (“Zims,” as they call themselves), he left for South Africa in 2008 to seek work, and he eventually found a job polishing cutlery at the Roundhouse Restaurant in Cape Town.

While he worked at the restaurant, Nyamudoka began to learn words like “foie gras” and “Merlot” and was soon promoted to waiter. “I had never drank wine. There was no wine tradition in my house growing up,” Nyamudoka says, but as he began to taste wine with the restaurant’s beverage director, he was intrigued. Nyamudoka’s curiosity paid off, and he landed a job as wine steward at Nobu at the One&Only resort when it opened in 2009 with a 6,000-bottle cellar. “My journey as a somm began there,” he says.

After winning the Reaching for Young Stars Best Wine Steward Award in 2013 and working at The Oyster Box hotel in Durban for 18 months, Nyamudoka became head sommelier at The Test Kitchen, widely acknowledged as the best restaurant on the African continent.

“That first year, it was pure survival,” he recalls. “I was one of the only Black people on staff, and many of my fellow managers resented me and made life very difficult.” Redemption arrived when his wine program won the Eat Out Wine Service Award in 2016.

Nyamudoka is one of many Zim somms who have emerged as rising stars on the South African dining scene in the past decade. Yet in spite of their growing acclaim, many feel as though they’re outsiders, Nyamudoka reports.

“We had no ‘taste memory,’” he says, something he realized after reading Jonathan Nossiter’s wine memoir, Liquid Memory. “We had never tasted cranberry, black currant, quince, or paprika, so we had no idea what the wine establishment was describing.”

Nyamudoka and his friends started an informal group to create their own associations for wine in connection to the foods, herbs, and spices they’d grown up with. “It became ‘if you smell this, it’s Shiraz,’ then we would write the English words we were supposed to say. It became fun.”

With three other Zim somms, Joseph T. Dhafana, Marlvin Gwese, and Pardon Taguzu, Nyamudoka formed Team Zim to compete in the World Blind Wine Tasting Championships in 2017 and 2018 in France. “It was our first time to Europe, our first time out of Africa,” he recalls. In 2018, Team Zim came in a respectable 14th place out of 24 competitors, beating Spain, Italy, England, and the U.S., teams with far more formal wine education and experience. (A documentary about their journey, Blind Ambition, will be released soon.) 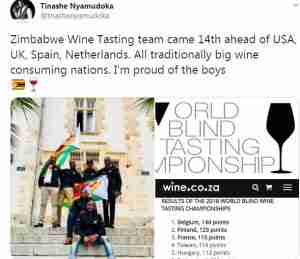 At the top of his game as a buyer and a taster, Nyamudoka set his sights on launching a brand of his own—one that could provide a model for other Black wine entrepreneurs to follow. “There are lots of initiatives on wine farms to create Black-owned wine labels that are Fair Trade-certified,” he explains. “But how can we empower Black brand owners if they don’t understand branding, selling, distribution, and export? I want to create the blueprint.”

Nyamudoka reached out to one of his favorite winemakers—and good friend—Attie Louw of Opstal Estate in the Slanghoek Valley for help, and his blending education began. “I don’t pretend to be a winemaker, but I do bring a lot of experience from hospitality, gastronomy, and being a sommelier,” he says. “At The Test Kitchen, I watched the chef take three days to make a single ingredient, and the way he built a dish is the same way I approach creating my blends: This block brings acidity, this brings crunchiness, this brings fruit.”

Featuring elements of Zimbabwe and South Africa on its labels, Kumusha Wines launched with the 2017 vintage: just 1,200 cases combined of a Chenin-Semillon blend (inspired by Chris Alheit’s Cartology) and a Cabernet-Cinsault. They sold out in three months. “People were shocked to find a wine with Shona on the label; people were really feeling it,” Nyamudoka reports, particularly in Zimbabwe, which has become Kumusha’s top export market. He’s since added a Roussanne-Chenin Blanc-based blend (The Flame Lily) and a tier of accessibly priced varietal wines sourced from different regions throughout the Cape Winelands.

Inspired by the young generation of winemakers ushering in a new era for South African wine—“young guns like Chris Alheit, Eben Sadie, and Chris Mullineux coming in with no generational ties to land,” he describes—Nyamudoka favors natural fermentations, large foudres, and minimal intervention in the winery. “The Swaartland guys moved the spotlight away from the old Stellenbosch guys who went for power and force; they are making wines that aren’t trying to be foreign but that are representative of South Africa and our unique terroirs.”

“Tinashe’s blending and assembling skills are based heavily on his instinct and individual experience around wine,” says Opstal’s Louw. “His experience working as a somm and wine judge has given him the ability to recognize quality and understand what the customer wants and can relate to. Both of us value drinkability and are seeking wines that have tension and focus and showcase terroir. That is the Kumusha philosophy.”

Since the end of apartheid, South Africa’s wine industry has worked to bring more black people into its fold, but many barriers have hampered real progress. Roadblocks include the inertia of the status quo, says Jim Clarke, author of Wines of South Africa.

Of the growing number of Black-owned brands, many are built with the worker-owned Equity Sharing Scheme (ESS) model, where workers own all or a significant portion of a brand and its capital, Clarke says. “Many efforts have focused on land ownership, yet farming is the least profitable part of the industry and one that calls for substantial capital investment.”

“Kumusha is succeeding because it’s a great brand, not just a great black-owned brand…”

Clarke believes that Kumusha—an example of entrepreneurship ownership—is more likely to succeed in the fine wine world because of Nyamudoka’s skill set and hard-earned wine credentials. “Tinashe’s project is an example of how vital passion is to the success of any wine venture,” he says.

In the past, many efforts to bring true inclusion and diversity have failed, says Louw, because the industry rushed to “push someone through the system rather than breeding quality and celebrating that. Tinashe is not a poster boy for a corporate company trying their hand at a Black-empowerment venture,” but an experienced wine professional who spent five years developing his own wine brand. “Kumusha is succeeding because it’s a great brand, not just a great Black-owned brand,” he adds.

Since leaving The Test Kitchen in February and relocating to Johannesburg, Nyamudoka has concentrated on developing Kumusha’s export markets around the world, as well as building wine culture throughout Africa.

“We need to encourage the Black middle class to embrace wine drinking at home, so it can become part of our culture,” he says. With fellow Team Zim somms, he founded Black Cellar Club (BLACC), an association of wine professionals dedicated to promoting education and opportunities for Black wine industry members in South Africa and other African nations, including Kenya, Nigeria, Tanzania, Zambia, and Zimbabwe.

There is strong interest in Kumusha from several export markets, particularly the U.S., where the brand will launch in October 2020. Giles Thomas, president of Baobob Wines, Kumusha’s U.S. importer, reports that demand from wholesalers currently outpaces supply.

For Nyamudoka, the work is just beginning: “I know enough about this industry to understand that we also need black ownership in production, distribution, retail, and marketing. Kumusha is my vehicle to push through this agenda.”

This article was first published on SevenFiftyDaily