In its rush to develop new coal mines to end its power crisis, the Zimbabwe government is handing out concessions to miners in conservation areas, outraged environmentalists say.

Conservationists in Hwange say that the Zimbabwe government may have granted concessions to two Chinese companies allowing them to explore for coal inside the Hwange National Park, the country’s biggest game reserve.

The Bhejane Trust, which works with Zimbabwe’s National Parks and Wildlife Management Authority in conservation in the Hwange area, says two concessions given to Afrochine Energy and the Zimbabwe Zhongxin Coal Mining Group are located inside park and safari areas. Bhejane says it made this discovery after its monitoring teams intercepted the two companies’ workers conducting exploratory drilling in the area.

“We followed up on this and discovered the Government has allocated two coal mining concessions in the middle of Sinamatella and Robins. The mining concessions are Special Grants which apparently can only be issued by the President, and both been granted to Chinese companies,” Bhejane said in a statement Tuesday.

Afrochine Energy is the local unit of Tsingshan, the global stainless steel company that has recently been allowed grants to prospect for both coal and lithium in Zimbabwe. Tsingshan’s Afrochine already runs a ferrochrome plant at Selous.

SustiGlobal, a company contracted to do an environment impact assessment for the projects, has since sent Bhejane and other conservation groups a questionnaire on their response to the claims. One of the forms, Bhejane says, shows that Afrochine’s concession SG7263 incorporates Deteema Dam and Masuma Dam. Zhongxin holds the other concession, SG 5756. 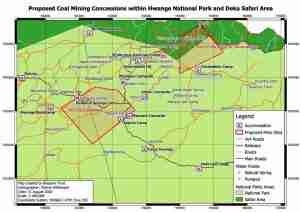 “However, they have started exploratory work in the Park, so it is not sure if an EIA permit has been granted or not,” Bhejani says.

Desperate for power supply, Zimbabwe has been pushing for more coal production. In August, President Emmerson Mnangagwa toured several of the new Hwange projects. Combined, all the planned new coal projects could add up to 3000MW of power by 2023, the Ministry of Mines says.

Zhongxin plans to build a 300MW power plant and is currently building a coke plant.

Most of the new projects are outside reserve areas, but environmentalists and community groups say some of them may be placing conservation and local communities at risk.

Earlier this year, villagers in Lukosi in Hwange wrote to the Hwange Rural District Council to complain about air and land pollution caused by Zhongxin trucks along Nekabandama road. The community says pollution has put homes, schools, clinics, and irrigation schemes at risk. Communities around Deka River have also protested about the pollution of water by mining companies upstream.

A petition by the community said: “We beseech the Hwange Rural District Council to exercise its constitutional role and ensure the company engages in dust suppression, secure sustainable development through surfacing of the road leading to Zimbabwe Zhongxin Coking Company plant in the shortest possible time and ensure that the company fulfills its obligation to the community as per their pledge during consultations with the community.”

Zimbabwe has signed a US$3.5bn compensation deal with white farmers. Here’s what you need...