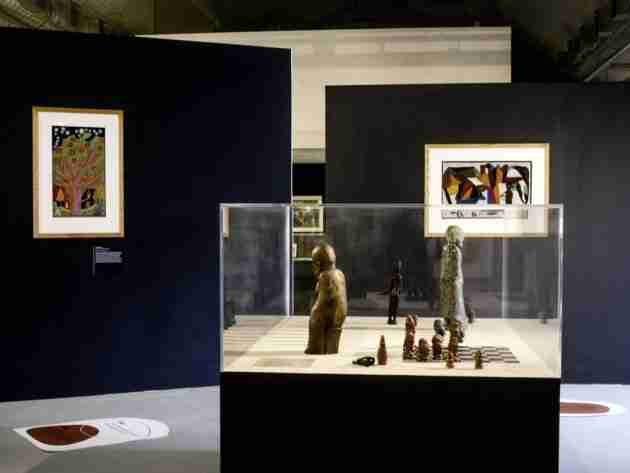 A fascinating collection of paintings, drawings and sculptures by young Zimbabwean artists has gone on display after being recovered from the basement of a Shoreditch church.

They were all made in the 1940s and stored in St Michael and All Angels’ Church on Mark Street sometime after touring the country in the 1950s.

The church was deconsecrated and turned into storage in the mid 60s, then bought in 1978 by architectural salvage firm Lasscos, who put the artworks into storage.

Now they have been acquired by The Belvedere Trust, who have put them on display for the first time in more than 60 years at the nearby The Theatre Courtyard Green Rooms in Bateman’s Row.

The Stars are Bright: Zimbabwe through the eyes of its young painters from Cyrene (1940-1947) features work by more than 40 young artists including Samuel Songo, Kingsley Sambo, and Timothy Dhlodhlo.

They were created while students at Cyrene, a boys’ mission school near Bulawayo and feature a variety of techniques, themes and styles.

Co-curator Georgia Ward said: “There had been an exhibition of the Cyrene paintings in the late ‘40s which travelled around the UK and generated a lot of interest, with articles in papers – a piece was bought by Barbara Hepworth.

Somehow they ended up in the crypt of St Michael and All Angels and were just forgotten.

They were discovered when Lasscos took over and put into storage, and they are in fantastic condition.

There is no damage to any of them, the watercolours are absolutely unchanged and the colours incredibly bright. It’s almost as if they have come straight from Bulawayo.”

Cyrene was founded in colonial Zimbabwe (then Southern Rhodesia) by Edward “Ned” Paterson, a Scottish clergyman who was passionate about the visual arts.

He ensured that pupils took weekly art classes and they were inspired by their flora and fauna, rich tradition of religion and folklore, history and events in their changing country, to produce a unique body of artwork.

Ward who co-curated with Chiedza Mhondoro and Jessica Ihejatoh said: “It is a critical time to share the work of Black artists past and present. We encourage viewers to take inspiration from the environment in which the artworks were made.

The Cyrene paintings remind us that there is no single story of African Art. They have a very particular bold, graphic style; drawing with pencil, filling in with watercolour and drawing the outline with ink.

But they all have individual stories and characteristics. They all use their imagination and have this combined quality of filling the page right to the very edges. 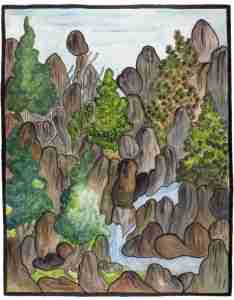 “Some artists were quite young, so there is a sense of playfulness, but the works reflect the world around them with images of their home lives, the landscape and animals. You are really seeing the country through these artists’ eyes and we have put them at the forefront of the exhibition narrative by displaying their photos next to their work.”

The free exhibition takes its title from a work by Musa Nyahwa and when it closes on September 30, The Belvedere Trust plans to tour it to Zimbabwe.