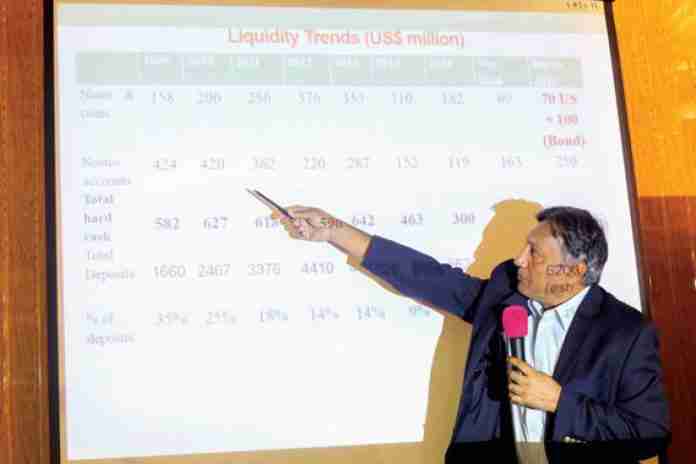 With Zimbabwe facing a deep economic crisis, marked by acute foreign currency shortages, debate is raging on how best the country can manage the exchange rate.

The Government insists on keeping the 1:1 parity for the US dollar and local bond notes and RTGS, saying freeing the rate before reforms and without reserves will feed hyperinflation. But critics say this is damaging the economy, especially exporters.

University of Zimbabwe professor of economics Ashok Chakravati has made a unique recommendation; he proposes a hybrid market that includes elements of both controlled and free trade, a system that has been used elsewhere.

He says key to solving the crisis is narrowing the deficit, and backing that up with a broad range of other reforms.

Secondly, on monetary policy: “Use of dollarisation as a monetary system, which is not a sustainable approach over a long period of time. New currency management system needed.”

We publish below an adaption of a presentation he has made on these two areas, including his proposals on the exchange rate and other economic measures that are needed to turn around the economy.

Excessive government expenditure is leading to uncontrolled deficits, as below:

It is the absolute amounts of the deficit that are destabilising the economy.

High government expenditure and deficits are the biggest single cause of our structural problems. The deficit results in printing of electronic money; that is RTGS balances in bank accounts without any real US dollars to back it. This leads to inflationary pressure, increase in import demand and forex demand, increased pressure on cash and liquidity needs, and a private sector starved of credit.

How to reduce expenditure

Budget measures are all positive. I have been recommending these for many years. But we need to go further:

With all proposed measures and additional measures, potential savings of $1 billion plus are possible.

What revenue measures are needed?

Given the large size of the informal sector, the 2% tax is necessary. However, to alleviate incidence on the poor, the limit could be raised to $20. A new segmented tax code for mini and micro enterprises based on presumptive taxes can be introduced. Grant an amnesty on penalty and interest to clear $4.2 billion in tax arrears.

Dollarisation has not been successful in any developing country over a long period of time. Dollarisation has resulted in Zimbabwe becoming a high cost economy and having a perpetual cash shortage.

The solution: introduce a local currency with monetary controls and a proper market based exchange mechanism against the US dollar. This is not possible without pre-conditions.

Interim measures: Paragraph 64 of the Transitional Stabilisation Programme states that a liberalised foreign exchange market should be introduced. I provide a hybrid solution below based on the Nigerian auction model, which will maintain price stability based on the US$6 billion or so available from export earnings and diaspora remittances.

Introduce Hybrid Forex Management system based on Nigerian auction model. Under this model, there would be 50% retention from all exporters by RBZ at 1:1, which will ensure adequate forex for essential imports and maintain price stability. Total forex needed is $2.5 billion.

The other 50% would be sold through the banking system on a transparent platform similar to the Nigerian “Investors and Exporters Window”. Forex available: $3.5 billion.

Access to the platform would be restricted initially to priority imports, and gradually expanded to invisibles and capital account transactions over time.

The platform permits proper forex rate discovery rather than use of Fourth Street, the Zimbollar index or across the border in South Africa. This is will result in a proper market based pricing of import goods.

Available lines of credit can be used to smooth the availability of forex to the platform on a month to month basis.

Benefits of this measure:

ZIMRA should use a daily rate generated by the auction system for calculating import taxes. This will eliminate distortions, corruption and generate additional revenues to cover fiscal deficit, if any.

Ease of Doing Business Reforms: The Zimbabwe Investment and Development Agency (ZIDA) and the Omnibus Act will not solve the problem. After two years of work, there’s been much resistance from regulators and Ministries. To make Zimbabwe Open for Business, a guillotine approach needs to be taken using the Ghana or Rwanda example.

Tapping into Diaspora: There is no coherent Diaspora policy. Other countries give tax and other special incentives to Diaspora investment.

Informal sector: An enabling environment must be created through a new policy. Forced formalisation is counter-productive.

Zimbabwe does not have a coherent industrialisation strategy.

Industry is in the doldrums due to high domestic costs, and lack of competitiveness because of the use of a strong US dollar. An ad hoc remedy to this was SI64/122. This resulted in monopoly profits, high domestic prices, and a lack of availability of goods.

The foreign exchange management system will eliminate the need for protective instruments. Depreciation of the exchange rate will give automatic protection to import substitution industries and good incentives for export development.

We need a new strategy based on value chains which have comparative advantage, and which recognises that Zimbabwe can have strong human resource based industries – ICT, Health and Education.

Such industries should be supported through a comprehensive package of incentives including tax incentives, accelerated investment allowances, preferential government procurement, and protection where appropriate.

The informal sector has grown to be the dominant sector of the economy. A Finscope study in 2012 indicated two million entrepreneurs with 800,000 businesses. There are no good estimates, but the informal sector could be accounting for 50%-60% of GDP. This is made up mainly of women and youths.

An example; 500,000 or more Makorokozas produce half of Zimbabwe’s gold output valued at $750 million.

There is no proper informal sector policy which encourages its growth and development. The current approach as indicated in 2018 Budget is to increase ZIMRA coverage of informal sector and tax them. This is not a development policy.

A proper evidenced based policy should be developed which provides the informal sector with a good enabling environment to grow. What we need is tax reform to accommodate small operators, special instruments to encourage legalisation, such as special mining permits and registration without taxation, among other steps.

OPINION | Mangudya: Time to let go of your sentimental attachment to dollarisation. That...