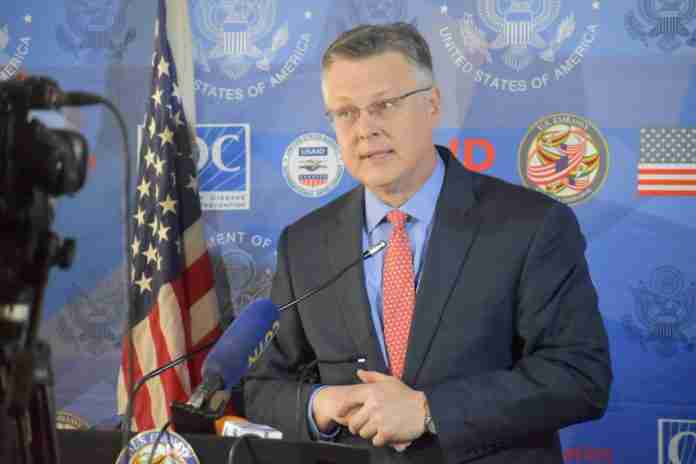 Mthuli Ncube’s budget is “positive” and can make an impact on the country’s fiscal crisis, but Zimbabwe needs “profound” political and economic reforms to end isolation and win debt relief, says US Deputy Assistant Secretary of State for Africa, Matthew Harrington.

President Emmerson Mnangagwa sent good signals by appointing techocrats to his Cabinet, but he will need to repeal repressive laws and end the harassment of opposition if he is to repair the damage of the post-election army killings, Harrington told a US Senate subcommittee hearing in Washington on Thursday.

“Since the election, we have seen some promising signs from the government, including appointment of a new, more technocratic cabinet, announcement of an economic plan acknowledging the need for significant monetary and fiscal reform, and a budget which, if implemented, would make important strides in that direction. So far, however, the pace and scale of reforms has been too gradual and not nearly ambitious enough,” he said.

The post-election violence had overshadowed an “encouraging” pre-election period that had seen open campaigns and international observers.

“It is clear that Zimbabwe has a long way to go – and requires profound political and economic reforms – to sustainably change the path on which it has been for nearly four decades,” Harrington said.

On how relations between the US and Zimbabwe have changed since Robert Mugabe’s ouster, Harrington said “there’s been a change in tone, a change in access, our engagements with senior officials including President Mnangagwa are much easier than they were under in the Mugabe years”. Still, he said, Mnangagwa has to act on his rhetoric.

Even if Zimbabwe did qualify for debt relief, Harrington says it would still be hard for the US to support debt clearance since a third of Zimbabwe’s arrears are with non-Paris Club members, which makes transparency difficult.

Asked by Senator Jeff Flake to assess factionalism in ZANU-PF, Harrison said the new techocrats trying to push for reforms might meet resistance from the old guard.

“The political elites would be threatened by some of the reforms that are being proposed and will do anything to try and undermine those efforts,” he said.

When asked if it was not too early to demand reforms from Mnangagwa just four months into his term, Harrington said: “It took a long time for Zimbabwe to dig itself into this mess, and I think it will take a long time to dig itself out of this hole.”

In his State of the Nation Address in September, Mnangagwa suggested there would be reform of some repressive legislation. But there has not been any radical progress.

In October, the Constitutional Court found that a section of POSA that compels protesters to seek police clearance was unconstitutional. The court gave government six months to amend the law.

Zimbabwe’s Former Permanent UN Rep. Chitsaka Chipaziwa has said government would deliberately not be responding to that ruling and thus “POSA is as good as gone”. Critics however remain sceptical.

The Ministry of Information has also begun consultations on reviewing media laws, but on Monday, presidential spokesman George Charamba implied that there was no need to repeal AIPPA.

At the Senate hearing, Flake also asked Harrington about the factions in the MDC, pointing out that Tendai Biti has a seat in Parliament while Nelson Chamisa does not. Harrington said the MDC had always been factionalised.

The main MDC, he says, has “not moved beyond the election” and continues to contest the results. The election playing field was not level, he said, although the election was better than past elections.

“What we would like to see from the opposition is, one; we encourage dialogue between the MDC Alliance and government. We think that’s important. We would like to see the opposition play a role in defining what the important reforms are moving forward, to move Zimbabwe in a different direction, and to play a role in determining how those will be implemented.

“So, we would like to encourage the opposition to engage in that kind of dialogue, and also begin to present an alternative vision for where it wants to lead the country and build public support for that.”

OPINION | Dear Mthuli: just having a weak currency alone may not boost exports