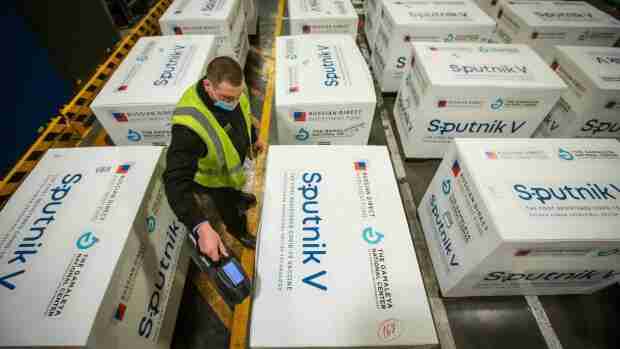 President Emmerson Mnangagwa has written to Russian President Vladimir Putin about a contract to buy Sputnik V coronavirus vaccine doses, according to Zimbabwe’s ambassador to Moscow.

“We are not asking for donations. But we are saying because the vaccine has proved to be very effective the government decided that it has to buy it,” Sango said.

Sputnik V is one of four vaccines that regulator Medicines Control Authority of Zimbabwe has authorised for emergency use. The others are Sinopharm and Sinovac of China, as well as COVAXIN, which is manufactured in India.

“Sputnik V has been highly recommended not only by the Zimbabwean government but across the globe where countries have accepted and agreed to the use of Sputnik V,” Sango said.

“We are still waiting for the modalities of how this can be done. I’m hopeful that the Russian government – like always – will provide support in this particular area,” he added.

Sputnik V was the first vaccine in the world to be rolled out last year. While it initially met with scepticism, peer-reviewed assessments in February confirmed efficacy rates of 92% percent.

Russian scientists last month said tests to see whether the vaccine was effective against mutations, such as the variant first detected in South Africa, had shown “strong results”. This would be a major draw to the vaccine for Zimbabwe, where tests showed that the variant is the most dominant.

Under the vaccine sharing platform COVAX, Zimbabwe was eligible for 984,000 AstraZeneca doses. But that vaccine’s performance against mutations has reportedly convinced government’s advisors to recommend that Zimbabwe postpone its COVAX allocation until it can access Sputnik V or another vaccine.

Russia has made 300 million doses of its Sputnik V COVID-19 vaccine available to African states, which are securing vaccines through the Africa Vaccine Acquisition Task Team (AVATT).