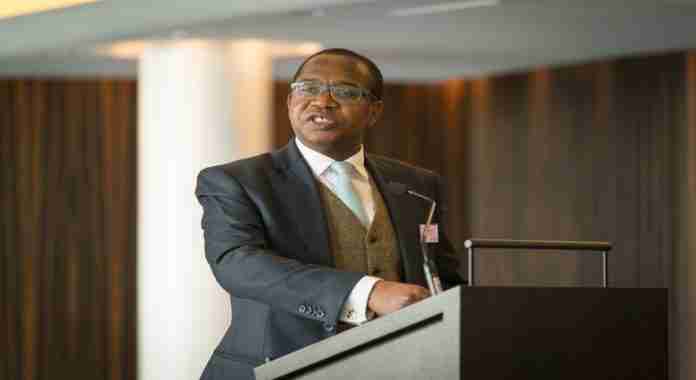 AT the height of the 2004 liquidity crisis, the then newly appointed central bank governor, Gideon Gono, cracked down on local banks with the zeal of a crusader and sent several owner-managers scattering.

Mthuli Ncube, who had set up his Barbican Bank in 2003, was one of the bank owners caught up in the central bank’s dragnet. Headlines from that era routinely described him as the “troubled banker” battling to retain his assets.

After that ordeal, Ncube, who denies he fled from the country during the bank crisis, went on any odyssey which took him from Johannesburg, Accra, London and Zurich, his last haunt before his imminent return to settle in Harare.

Appointed by President Emmerson Mnangagwa as Finance Minister on Friday, Ncube now sits at the centre of efforts to turn around an economy whose many troubles are often tracked back to the the 2004 banking crisis.

Ncube returns home from Zurich, where he headed the research arm of Quantum Global Group, an Africa-focused private equity outfit with investments in agriculture, hospitality, mining, timber, infrastructure and healthcare. Some of Quantum’s portfolio investments are in Angola, Zambia, Democratic Republic of Congo, Kenya and South Africa.

During his time at Quantum, Ncube led research into African investment opportunities, advising private sector and public sector clients on Africa and African policy-makers, giving him invaluable insight into where Zimbabwe currently stands, compared to its peers on the continent.

Before joining the Quantum Group, Ncube served as the chief economist and vice president of the African Development Bank, another role which would have strengthened his grasp of the continent’s economic terrain.

Zimbabwe, which owes the AfDB $600 million, could benefit from Ncube’s network at the international lender.

Speaking before his appointment, Ncube said Zimbabwe needs to address its foreign debt in order to restore its creditworthiness and credibility with multilateral lenders.
“So what one would do is to deal with Zimbabwe’s external debt. There’s two parts to that, firstly there is the debt that is owed to multilateral institutions such as the African Development Bank, World Bank and that needs to be dealt with first before any credit or monies can flow from these institutions,” he said in an August 2 interview.

Moyo quit his post in a huff the following year, after fights over policy. Simba Makoni, a reformist ZANU-PF official appointed finance minister along with Moyo, did not last much longer either, after falling out with Mugabe over economic policy.
Mugabe memorably chided Moyo, in particular, for resigning from Cabinet, accusing him of having a weak chin.

Ncube comes into government after telegraphing the tough choices needed to rescue the economy – scrapping the bond notes and capping excessive expenditure.

It remains to be seen how much room he will be given in that respect, but the country will not have to wait for long to find out — the 2019 national budget is due in just weeks. Ncube has said the first order of business would be to craft a clear economic vision and strategy to create an economy that exhibits strong GDP growth, averaging 6% annually, over a period of 10 years.

Unlike former industry minister Moyo, Ncube does not come into Cabinet without any experience of working with government.

In the early 2000s, Ncube was appointed chairman of the National Investment Trust (NIT), which was meant to warehouse the state’s shareholding in certain strategic economic sectors, such as mining, in terms of the government’s early indigenisation thrust.

At the time, NIT’s primary asset would have been a 15% stake in Zimplats, which it, however, failed to pay for.

Ncube was to launch an audacious, but ultimately futile, US$170 million bid for a 40% stake in Zimplats in August 2003.

But his deal-making instincts, which he will need as he navigates tricky terrain in government, saw Ncube successfully list his Barbican, then known as a small asset manager, on the Zimbabwe Stock Exchange in 2004 following the reverse takeover of Haddon & Sly.

With a doctorate in Mathematical Finance on ‘pricing options under stochastic volatility’, the cerebral economist has an intimidating resume and impressive international contacts which the Mnangagwa government hopes to open some important doors as it seeks to re-engage global capital.

Ncube is also the HSBC Distinguished Professor of Banking and Finance at the Graduate School of Business Administration (Wits Business School), University of the Witwatersrand, on a part-time basis.

He has also lectured finance at the London School of Economics and is a visiting professor at Oxford’s Blavatnick school of governance.

Ncube is a former Dean of the Faculty of Commerce Law and Management, and also Dean and Professor of Finance at Wits Business School. He founded the Centre for Entrepreneurship at Wits University.

He has also served on the South African Financial Services Board (FSB), which regulates non-banking financial institutions. He has also chaired the board of the African Economic Research Consortium (AERC) in Kenya. He is a board member of the Royal Africa Society.

In one of the many ironies of Zimbabwe’s evolving political and governance systems, Ncube’s surprise appointment sets up an intriguing reunion with his former tormentor Gono.

The former central banker is now the chairman of the Special Economic Zones Authority board, which reports to the Finance Minister.

Reacting to the central bank’s aggressive moves against banks 14 years ago, Ncube accused Gono of heavy-handedness.

“I think the action taken against us was disproportionate and excessive,” Ncube said.
“There are some banks which were exposed to over $100 billion but were said to be in a sound financial position.”

Inside the Mthuli playbook

Ncube comes in with a huge weight of expectation on his shoulders. By calling for an end to bond notes within “the short to medium term”, he has added even further pressure on himself even before stepping into his new office.

But what does Ncube plan to do differently? Far from being the lone super-hero saviour, a big part of his strategy appears to be on building consensus around policy. He is proposing advisory committees for key areas such as budget monitoring, monetary policy and investment.

Below are some of the steps that Ncube plans to take:

COLUMN | Coronavirus: How Zim’s legal response shows a Govt not taking this seriously

Foreign loans: Court ruling a victory for transparency, but don’t hold your breath