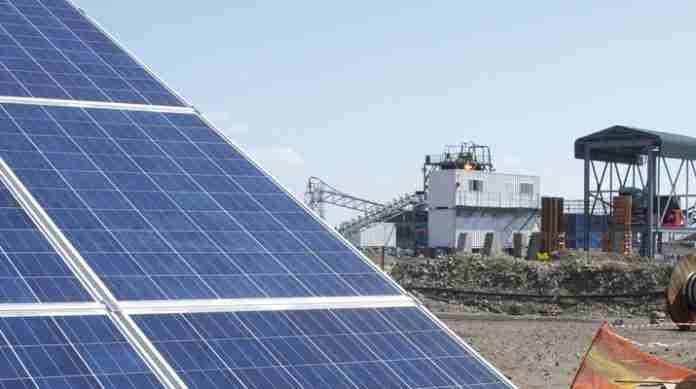 As power supply becomes more erratic, Zimbabwe’s miners, among the country’s largest consumers of electricity, are deepening their investments in solar energy.

Caledonia Mining is inviting bidders to build a 20MW solar farm that will feed its Blanket Mine, becoming the latest miner to step up plans to invest in renewable energy as an alternative to power utility ZESA.

In a notice last week, Caledonia said the solar project would be built on 40 hectares next to its mine, and is to be completed in three phases. The contract is expected to be awarded in February next year with the power plant to be commissioned in the final quarter of 2020.

Blanket has already installed 18.4MW of diesel backup, but a move to solar will save costs, Caledonia says.

“Given the escalating cost of diesel and the problems related with obtaining a secured supply, a solar PV plant with integrated storage is proposed to mitigate the impact of Grid instability as well as to reduce the reliance on diesel power generation,” Caledonia says.

The first phase of 6.55 MWp is meant to meet Blanket’s consumption, with no excess power dispatched the grid; phase two comprises a further 6.55MWp to meet peak demand, with excess power offloaded to the grid; while the third phase will see construction of the remaining 6.55MWp to meet the maximum power allowed at the point of interaction with the ZESA grid.

The last two phases will depend on whether a deal can be reached with the national utility that would allow excess solar generation during the day to be off-set against the mine’s utility consumption at night.

Caledonia envisages a 13-year contract and the mine may consider a stake in the project.

Blanket Mine is close to completing a five-year US$44 million expansion project, comprising mainly the deepening of the central shaft to approximately 1,200 meters. Central shaft is expected to be commissioned in mid-2020, which will increase the mine’s annual output to 80,000 ounces from the current approximate 50,000oz.

Miners are heavy power consumers – globally, energy accounts for as much as a third of a mine’s operating costs.

For Zimbabwe, the lack of reliable power is one of the factors that has stunted new investment in Zimbabwean mining. As at Wednesday, Zimbabwe was generating 628MW of power, a fraction of peak demand, according to data from the Zimbabwe Power Company.

Those investors that are investing or expanding in the country have had to spend on generating their own power to offset erratic supply from ZESA.

“You will find that new power generation will come from mining companies establishing solar projects. By 2023, we will have over 600MW of power from projects undertaken by the mining sector,” says Mines Minister Winston Chitando.

The downside for ZESA, however, is that if mines start generating their own power, the utility will lose a large chunk of its sales, as miners are the biggest consumers of power.

RioEnergy, the RioZim energy arm, is to start installation of 180MW of solar power at the gold miner’s operations in the first quarter of 2020. Under the plan, four separate solar parks of 45MW each are being installed at RioZim’s three gold mines – Renco Mine in Nyajena, Dalny Mine in Chakari, Cam and Motor Mine in Kadoma, and ​​also at the Murowa Diamonds Mine near Zvishavane.

Karo Resources, which plans to start developing a new platinum mine in Mhondoro-Ngezi in 2020, is to install a 300MW solar power plant to feed the operation.

China’s Tsingshan Global Holdings, the world’s number one producer of stainless steel, has signed an MoU for the construction of a US$1 billion steel plant at Mvuma. To make that possible, Tsingshan will have to build a 600MW power plant, starting with an initial 300MW.

Prospect Resources has also recently signed an MoU with African Continental Minerals (ACM) for the supply of 20MW of power to the Arcadia lithium project.

“We’re turning down lots of stuff. Being green is a precondition for lending,” said Laurent Charbonnier, global head of metals and mining at HSBC, was quoted as saying recently.

Afreximbank picked to raise US$143m for Zimbabwe lithium mine, commits US$75m to project