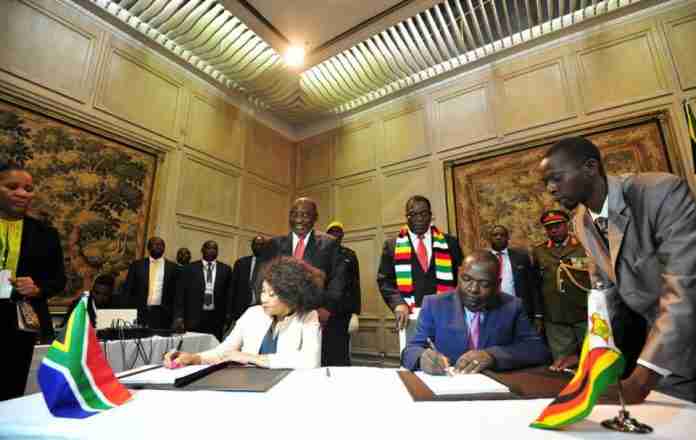 Zimbabwe’s trade tariffs and millions owed to South African companies weighed on talks between the two countries at their binational commission which ended Tuesday.

“The current laws continue to restrict imports from SA and this is against SADC trade protocols,” said Davies, after talks with Zimbabwean officials. Agreement had been reached to strike down 29 tariff lines, but the bulk of the tariffs remain a concern, Davies said.

In the talks, South Africa pushed for an end to tariffs on products that Zimbabwe does not produce. South Africa also wants tariffs on agriculture and dairy products lifted. However, Zimbabwean officials said removing all tariffs would make it harder to revive the country’s industries, which have been shielded from foreign competition since Statutory Instrument 64 of 2016.

Zimbabwe has also tabled a textile and clothing trade deal with South Africa, details of which are not yet clear.

In his speech at the close of the meetings, South African President Cyril Ramaphosa also spoke against trade tariffs, saying there “are good prospects for both of our countries but there is also a need to ensure ease of doing business and elimination of trade barriers”.

Another tough area for negotiators was the millions owed to South African companies operating in Zimbabwe, due to the foreign currency crisis. SAA was owed US$7 million last year, according to spokesman Tlali Tlali. PPC, the cement maker, has said it is failing to repatriate US$60 million from Zimbabwe. CEO Johan Claassen said “we will do everything in our power to get some of the money out in a legitimate way.”

Finance Minister Mthuli Ncube said this was a key issue in the talks, and Zimbabwe was structuring a way of ensuring that the money was repatriated to South African firms.

“We will accommodate South African companies and continue to work at ensuring their funds are repatriated,” Ncube said.

The failure by investors to repatriate funds from Zimbabwe is one of the main reasons that many of them have kept their money out of the country. Central bank has recently ordered banks to set aside 15% of their forex allocations to portfolio investors, while an Afreximbank facility was structured to fund foreign payments.

The two countries announced on Tuesday that they are considering expanding an existing R100 million facility and could extend state-guaranteed private loans to Zimbabwean companies.