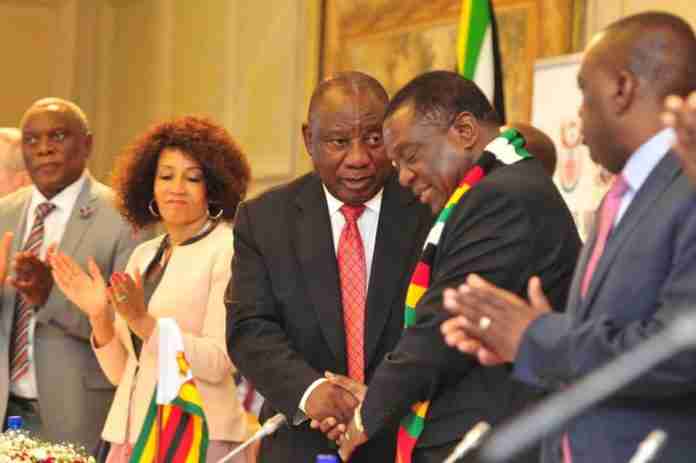 You can always trust Cyril Ramaphosa to send coded messages to his comrades in Zimbabwe.

In 2016, at the Zanu-PF annual conference in Masvingo, in a “solidarity speech” on behalf of the ANC, he said liberation movements could only secure their relevance by focusing on their economies and making the lives of their people better.

“The continent looks to this conference to provide leadership on how together we can build a better life for our people,” he said then. That caused quite a few awkward moments for party delegates fully fed on a diet of fawning political slogans.

Ramaphosa then stepped off the podium, shook hands with a sitting Robert Mugabe, and then shared a warm embrace with Emmerson Mnangagwa, then a fellow VP.

Three years later, both men are now the leaders of their countries. Both are trying to mend the damage left by the men they succeeded. Judging by Ramaphosa’s remarks at the end of economic talks in Harare on Tuesday, they are doing it differently.

In his speech, Ramaphosa may well have been sending a message to his peer.

One does not just get out of an economic crisis and attract investment by rhetoric and miracles; acknowledge the “missteps of the past” and take concrete steps to shake things up.

Just like Mnangagwa – but perhaps not to the same extent – Ramaphosa too has needed to work hard to win over the doubters.

“As South Africa we are also emerging from a difficult period not only of poor economic performance but also of diminishing public trust in state institutions and low investor confidence,” Ramaphosa told officials attending the bi-national commission of the two countries at the Meikles in Harare.

And how has he gone about it?

“We have been forthright in acknowledging the effects of decline of governance, corruption and what we describe as ‘state capture’ on our economy, our institutions and our people,” Ramaphosa said.

To change direction, a country needs investment, whether domestic or foreign.

“We have also recognised that we will not be able to meaningfully address the triple challenges that our country and people face, of unemployment, poverty and inequality without increased investment in critical areas of our economy.”

And how exactly is he doing this? For one, Ramaphosa is doing one thing that Zimbabwe has been consistently bad at for years; that is being consistent on policy, and being predictable.

Said Ramaphosa: “It is for this reason that we have prioritised the restoration of a policy and regulatory environment that is stable, consistent, predicable and conducive to attracting investment in South Africa.”

This has meant taking actual steps on changing laws, sticking to them, and not just talking about doing so.

“We have taken decisive steps to ensure policy certainty in areas that had been a hindrance to investment. Amongst these was the move to speed up the finalisation of our transformative Mining Charter which deals with the regulatory architecture of our mining industry and number of other regulatory frameworks.”

In contrast, while having won praise for ditching the badly structured indigenisation law, Zimbabwe is still to decide on a new mining policy. Last year, Mnangagwa rejected a widely criticised amended mining and minerals act, but no steps have been taken since to replace it with a better piece of legislation to give investors clarity.

Recent fiscal and monetary policy statements have added to the uncertainty.

While Zimbabwe has talked up a storm about ease of doing business reforms, proposed legislation has taken longer than investors are willing to wait for.

Ramaphosa, who said such reforms were necessary to make business work for the two economies, said of his own reforms: “We have further recognised the challenges raised with us by investors, including among other things, our visa regime, administered prices for ports, rail and electricity, the cost to communicate as well as infrastructure bottlenecks.”

As for investment, both Mnangagwa and Ramaphosa are taking about billions of investment. But only one of them seems to have an actual game plan. Ramaphosa aims to attract $100 billion in FDI over the next five years. While Mnangagwa has been lethargic about how exactly he wants this to happen, Ramaphosa showed that one actually needs a strategy.

“To this end,” Ramaphosa said, “I have appointed four investment envoys tasked with traversing the length and breadth of our country and indeed the world to mobilise investment to South Africa.”

He added: “As a result of these efforts, South Africa is firmly on a path of growth and renewal.”

In contrast, Mnangagwa’s speech at the same event was thin on detail on how he too is making his investment dreams a reality. A reflection of the focus of those still around him, his speech gave needless prominence to lofty political issues.

While Mnangagwa in his speech, to his credit, talked about simplifying and rationalising investment rules, he yet again lost an opportunity to break this down into what his government has actually done, or is doing; from special economic zones, the work towards a Zimbabwe Investment Development Agency and other measures.

In the end, just like in 2016, it may well have been a read-between-the-lines lecture, delivered on the down-low, from one comrade to another; this leadership thing is about substance over rhetoric.

Zimbabwe 2020: The rare good news stories that you might have missed