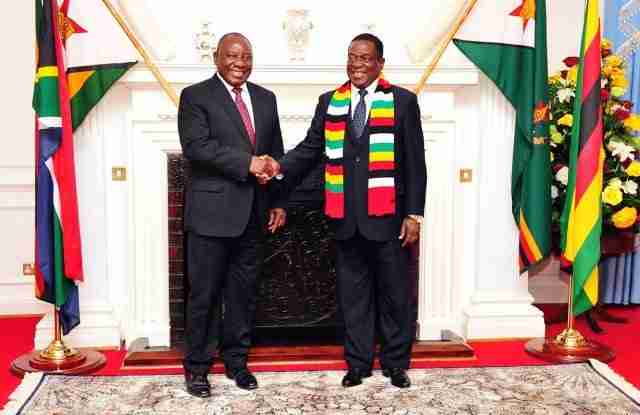 South Africa and Zimbabwe are considering expanding an existing R100 million facility and could extend private loans to Zimbabwean companies, some of the few options available to help Zimbabwe in the absence of the large cash injection the country craves.

A joint communique released after a meeting showed how limited the options are for financial assistance to Zimbabwe; the two countries are looking at increasing a standing credit facility between central banks of the two countries, plus a new facility from South African banks to Zimbabwean companies.

“The two sides agreed to consider options for expanding the standing facility agreement between the respective central banks. Other financing options beyond this are also being explored, for example a facility from South African private banks to the Zimbabwe private sector and guaranteed by the South African Government, with an appropriate counter guarantee from the Zimbabwe government,” the communique said.

Under that existing facility, Zimbabwe can access up to R100 million. Previous reports have said Zimbabwe had put up collateral for this facility in the form of its holdings of SA Land Bank bills. The extension of this facility depended on Zimbabwe being able to provide further collateral, SA official said in January.

A credit line from South African banks to Zimbabwean businesses would be somewhat similar to a deal being discussed with Botswana, where private funders make available credit for businesses operating in Zimbabwe, but only with guarantees from Zimbabwe and Botswana. This has raised concern over Zimbabwe’s ability to raise credible guarantees, given its poor rating.

According to the communique, South Africa and Zimbabwe would work jointly to lobby international support for Zimbabwe’s economic reforms and for its debt arrears clearance plan.

In his speech at the binational commission, Mnangagwa sought to ease worries among South African businesses operating in Zimbabwe on the environment in Zimbabwe.

“I would like to take this chance to reassure South African investors and entrepreneurs of the security of their investments. We are a listening government, open to dialogue to address the challenges that you may face,” Mnangagwa said.

The Transitional Stabilisation Programme, Mnangagwa said, was enforcing fiscal discipline while, on the political side, the government was reforming laws to align them with the Constitution.

Earlier, Ramaphosa repeated his call to have sanctions on Zimbabwe lifted, saying the country deserved support from the rest of the world to help mend the economy. “We want to see meaningful support being given by international development partners to Zimbabwe because Zimbabwe does deserve the support that the world can give.”

In 2009, following the formation of the unity government, South Africa turned down a request for a $1 billion bailout from its neighbour. In 2013, then Finance Minister Tendai Biti’s plea for budgetary aid was also rejected.

This is unlikely to change, with Ramaphosa saying: “South Africa, Mr President, stands ready to render support to Zimbabwe within our means in your quest for economic renewal.”