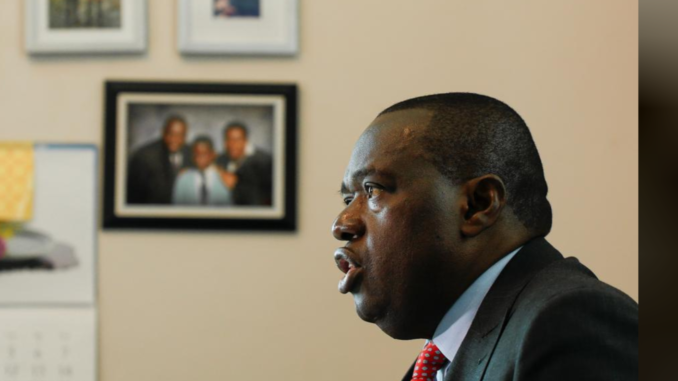 Foreign Affairs and International Trade Minister Sibusiso Moyo, who has died at age 61, made the jump from the military to become the face of President Emmerson Mnangagwa’s foreign policy.

“His Excellency the President, CDE ED Mnangagwa, regrets to announce the passing on early this morning of Dr SB Moyo, our Minister of Foreign Affairs and International Trade. The Minister succumbed to COVID-19 at a local hospital,” a statement by Acting Cabinet Secretary George Charamba said.

“The nation will be kept apprised of further developments regarding this untimely demise of the Minister, himself a decorated soldier and freedom fighter.”

Moyo, according to associates, died at Arundel Hospital in Harare. He is the third minister, after Perrance Shiri and Ellen Gwaradzimba, to die of coronavirus.

Moyo had, over the past two years, been hospitalised frequently, receiving treatment for what was said to be a kidney ailment.

In 2017, Moyo swapped his military fatigues for tailored suits. It was the same sort of quick makeover he tried to give his government, an apt illustration of how an administration that had come via a coup was working to present itself as reformist.

Known widely as SB, he had risen to national prominence when, before dawn on November 15, 2017, the then Major-General appeared on national television to announce what was the beginning of the end of Robert Mugabe’s 37 years in power.

Reading from his iPad, Moyo’s deep voice boomed the immortal words: “Firstly we wish to assure our nation, His Excellency, the president of the republic of Zimbabwe and commander in chief of the Zimbabwe Defence Forces, comrade R G Mugabe and his family, are safe and sound and their security is guaranteed. We are only targeting criminals around him who are committing crimes that are causing social and economic suffering in the country in order to bring them to justice.”

Days later, on November 18, as thousands approached State House during a march for Mugabe’s ouster, Moyo appeared at the back of an army pick up truck, loud hailer in hand, asking the marchers to disperse:

On November 30 that year, Moyo was named as a surprise pick for Foreign Minister in Mnangagwa’s first cabinet.

A graduate of the Zimbabwe Military Academy, Moyo also studied for a doctorate in International Relations.

His military career was not without controversy. In 2001, a UN report said Moyo had led what it called “covert Zimbabwean military financial interests” during Zimbabwe’s military intervention in the DRC war.

As Foreign Affairs Minister, he led the task of integrating the trade function into Foreign Affairs, taking over a portfolio that had historically been housed under the Industry ministry.

Moyo’s biggest job was heading Mnangagwa’s attempts to reengage with sceptical Western nations. Part of these steps included inviting Western scrutiny of elections. Western nations sent observer teams to Zimbabwe for the 2018 poll, the first time they had done so since 2002.

For a while, under Moyo’s leadership, the Ministry of Foreign Affairs managed to tone down the tradition of shrill hostilities between Zimbabwe and Western governments.

In May 2018, the CDC Group, the UK’s development finance arm, announced a US$100 million credit package to Zimbabwean companies. It was the first such deal from any UK lender to Zimbabwe since 1994, and was seen at the time as a sign of thawing relations between the UK and Zimbabwe.

Arriving for a meeting with Boris Johnson in London, in 2018, the then foreign secretary and now UK Prime Minister is said to have quipped: “You’re the fellow on TV?”

However, it was easier for him to change his military uniform for formal suits, than it was to convince the world that Zimbabwe’s leadership had shed its old robes.

Despite his best efforts, which included controversially hiring Washington lobbyists, his goal to mend relations with the West remained elusive.

Rights abuses at home and frustration at the slow pace of reforms erased those hopes. But Moyo insisted Zimbabwe was reforming at its own pace.

“You cannot hurry certain systems,” he told an interviewer in 2019.

On the continent, Zimbabwe’s Ministry of Foreign Affairs successfully lobbied the African Union and influential African leaders to support Zimbabwe’s position that Western sanctions were stifling the country’s progress. This did not result in sanctions being removed, with the US instead extending sanctions while Britain opposed Zimbabwe’s readmission into the Commonwealth.

Yet, Moyo’s strategy did help ZANU PF to outflank its rivals – both those at home and in the West – in relations with Africa.

His affable demeanour endeared him to many, a stark contrast to the tough-guy image he had portrayed back in his historic broadcast of November 15. It was ironic that, well into his time in office, the man who had announced a military coup would come to be seen as one of the moderates in the administration.

His critics, though, continued to see him only as the “coup announcer”, whose role in the Mnangagwa government was to paper over the country’s failures on the world stage.

In June 2019, a group of Zimbabwean protesters attacked Moyo as he left Chatham House in London, where he had travelled to meet British officials and speak on Zimbabwe’s “new Dispensation”.

Responding to the attacks, Moyo said: “The Government of Zimbabwe remains committed to peaceful dialogue with all parties, with a view to building our country around shared values, including the principles of respectful disagreement and non-violence. We affirm the right of Zimbabweans to protest but to do so peacefully.”

‘They shall not return’

Moyo was born at Munene Mission Hospital in Mberengwa in 1960, the third born in a family of eight.

In January 1977, when SB Moyo was just a teen, freedom fighters invaded his school, Manama Secondary School. He was among the young students and teachers grabbed from his Form Three class to join the armed struggle. Together which his cousin, Elson Moyo, now Air Force chief, they travelled via Botswana, and onward to military training in Zambia.

The Rhodesian authorities ordered parents of the abducted children to follow the group.

But, according to SB Moyo’s father Cephas in a 2019 Herald interview, a group of freedom fighters led by a Joseph Kunyarara told the parents at a pungwe: “Those that have left will not return now. When they return, they will be Zimbabwe’s army.”

A coal deal in the works for Tsingshan, Contango