This month, Zimbabwe’s government will pay United States dollar allowances to its workers, exactly a year after declaring the end of a 10-year dollarisation experiment.

Wednesday’s announcement that the government will pay US$75 to each employee and US$30 to state pensioners for the next three months has been widely interpreted as a return to dollarisation after the reintroduction of the local currency triggered widespread instability in the economy.

In many ways, the payment of USD allowances is reminiscent of 2009, when Zimbabwe dollarised.

Just as it was back in 2009, runaway inflation, a rapidly devaluing currency, disruption of production, labour unrest and rising political tensions have forced the government’s hand.

With the least paid civil servant currently taking home the equivalent of about US$30, the new pay package, which includes a 50% raise on the government workers’ Zimbabwe dollar wages, is meant to provide some relief.

But, have the hard lessons that led Zimbabwe to abandon the US dollar been forgotten? And, can the government afford all this?

Can Zimbabwe pay for this?

Finding out just how many workers are on the government’s payroll is a strangely difficult task. But deductions from the Zimbabwe National Statistics Agency (Zimstat’s) 2019 labour force report suggest a headcount in the order of 430,000. The number of state pensioners is unclear, but the government appears set to spend as much as US$40 million per month on the US dollar allowances.

The 2020 budget is Z$63 billion. It was already not enough to pay a living wage, and it has already been decimated by inflation, government’s response to drought and the unexpected COVID-19 crisis.

Government has not given any indication of how it will raise the forex to fund the allowances, but given past experiences, old problems loom large. When the country dollarised in February 2009, the government paid all its employees US$100 allowances across the board.

By January 2014, the least paid government worker was earning US$375, with at least 80 cents from every dollar collected by the state going towards the wage bill. This figure peaked in 2016 and 2017, when the government spent 91% of its revenue on wages. 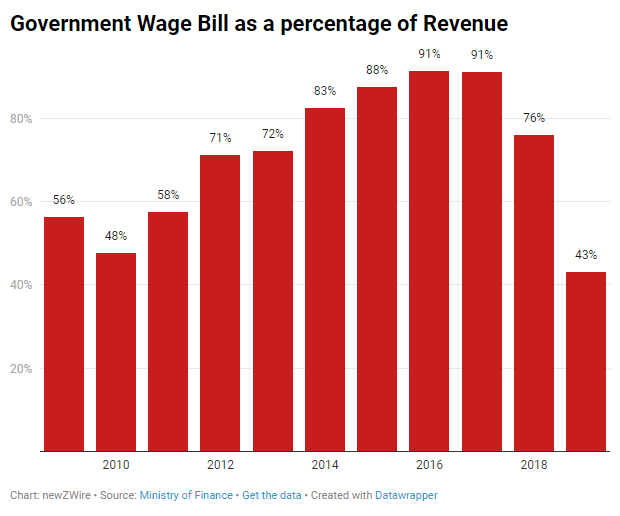 Inevitably, the government’s propensity to spend beyond its means resulted in a widening budget deficit which was funded through borrowings and money printing. The rest is history, which could now be repeated if past urges are not checked this time around.

There is also a big difference between the post-2009 years and now. Then, even as government struggled to pay workers, it had donor support for wages. This means government accounts would have been in a bigger mess without aid.

In 2009, a consortium of donors led by the Global Fund to Fight AIDS, Tuberculosis and Malaria, set up the Zimbabwe Harmonised Health Worker Retention Scheme (HHWRS). Between 2009 and 2011, when the scheme started to be wound down, donors made nearly US$70 million payments to the 18,700 health professionals – doctors, nurses, environmental health technicians, pharmacists, laboratory technicians and other support staff. The programme ended in 2014.

Now, with no donor support for workers’ pay, government has to go it alone. This may, again, see Zimbabwe having to suffer deficits.

The chart below shows how, by 2014, Zimbabwe had the highest percentage of expenditure being spent on wages in sub-Saharan Africa.

The chart below shows how, by 2014, Zimbabwe had the highest percentage of expenditure being spent on wages in sub-Saharan Africa. 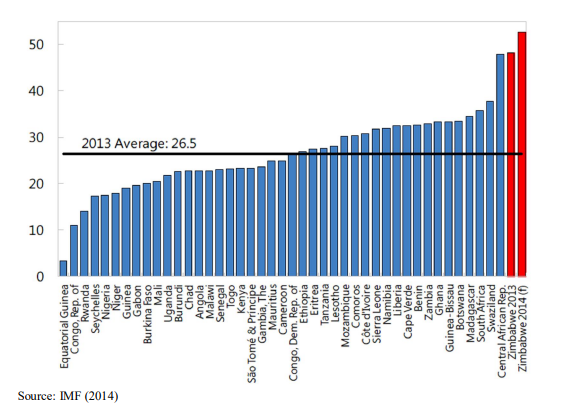 The government’s USD allowance decision was announced on the same day that the central bank said it would drop the fixed exchange rate it imposed on March 30.

This dual policy thrust amounts to a win by Finance Minister Mthuli Ncube, who was this week reported by Bloomberg to be in sharp disagreement with central bank governor John Mangudya over the currency peg.

The two men were last week summoned by the ZANU-PF politburo, which was alarmed by the rapid deterioration of the economy and demanded swift action.

Whether the latest forex market tinker will work remains to be seen. But if the central bank has not learnt any lessons from its 2004 experiment with forex auctions, then the latest iteration, scheduled to start on June 23, is doomed.

Central bank’s capacity to muster sufficient liquidity to get the market going is in question.

According to the RBZ, the forex auction system will be funded from offshore facilities arranged by the central bank, exporters’ surrender cash and liquidations as well as free funds.

The auction system will have a lower exchange rate for government, evidence of the fears, expressed by Ncube before a parliamentary committee recently, over what fully freeing the exchange rate will do to government’s obligations. But, just as before, this dual rate creates opportunity for the same arbitrage that has undermined previous currency trading systems.

It is not clear from the central bank’s statement how fuel imports, the country’s single largest foreign currency expense, will be managed under the new system.

Zimbabwe spent US$1.2 billion importing fuel in 2019, according to the RBZ, accounting for 25% of total imports of US$4.8 billion.

Currently, the central bank has been facilitating fuel imports through the issuance of letters of credit. Because these LCs are issued at the fixed exchange rate of 1:25, at a time when the parallel market rate is hurtling towards 1:100, the country’s fuel is heavily subsidised, compounding massive shortages of the commodity.

If Zimbabwe is indeed crawling back to the US dollar, as some suggest, one must hope that the mistakes that made the last dollarisation period a failure have not been forgotten.

From tin to lithium: How old Kamativi mine is being reinvented