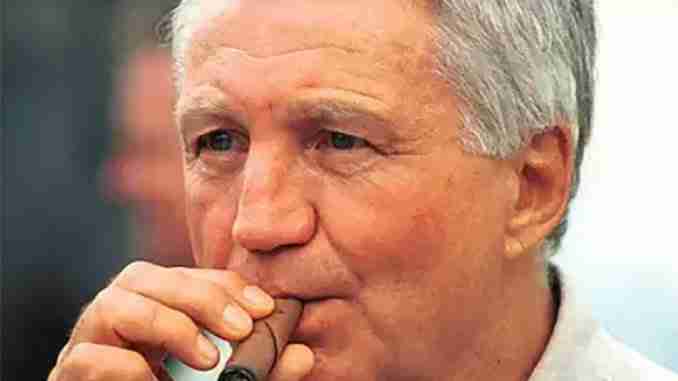 An entry on the website of one of John Bredenkamp’s companies tells us all we need to know about the controversial businessman: “In Africa, it is essential to work with change, not against it”.

Bredenkamp, who has died at 79, was involved in major scandals in Zimbabwe, DRC, South Africa and even Iraq, Iran and the UK. As that entry on the website of Breco International says, he knew how to manipulate any political waves to keep himself in the money, whoever was in charge, anywhere.

Born in 1940, Bredenkamp attended Prince Edward School, where a music and computer centre that he funded in 1998 bears his name. He captained Rhodesia’s national rugby side from 1965 to 1968.

After school, old high school networks came in handy. His first job as a leaf buyer at Gallaher, a tobacco auction company, was arranged for him by one of his old school teachers. Bredenkamp later left to form his own firm, Casalee.

In 1965, racist Rhodesia was placed under sanctions after declaring independence. Bredenkamp decided not to work against change, but to profit from it.

Through Casalee, he ran Rhodesian tobacco past the UN embargoes, using a network of complex barter deals to buy guns and ammunition for the Rhodesian armed forces.

Independence in 1980 brought change. Bredenkamp had to leave the country. In 1984, his Zimbabwean citizenship was withdrawn. However, as ever, he knew how to play change to his advantage.

He was allowed to return to the country. Bredenkamp quickly became a prized Mugabe ally, later reportedly helping Mugabe equip some of his farms and add to his personal fortune.

Bredenkamp also contributed funds to help ZANU PF build its new headquarters in Harare. That allowed him to secure his position in the country, which he was to use as a launchpad for businesses all across the world.

In 2001, a year ahead of elections, he declared: “It is in the best interests of Zimbabwe for Zanu-PF to win the presidential elections next year”.

But while he funded ZANU PF through the 1980s, he was also oiling apartheid South Africa, literally. One report, quoting SA government minutes from 1989, cites a note stating: “John Bredenkamp, who has acted confidentially for SA govt. before, offers oil [Casalee].”

He made money playing both sides many times. In 1991, British media reported that he was supplying arms to both sides in the Iraq-Iran war.

In 1998, when Zimbabwe intervened in the DRC war, Bredenkamp was there to make money. A 2002 UN report named Bredenkamp alongside Zimbabwean officials, among them Mnangagwa, who are said to have pillaged resources in the Congo.

When US and EU sanctions were placed on Zimbabwe, the government looked to his Rhodesia-era expertise to bust sanctions. The US Treasury described Bredenkamp as “a well-known Mugabe insider”.

Bredenkamp and 18 of his companies were blacklisted by the EU in 2009 for his “strong ties to the Government of Zimbabwe (and providing), financial and other support to the regime”.

It was alleged that Bredenkamp smuggled spare parts for Zimbabwe’s BAE Hawk jets early in 2002, against EU sanctions. But Bredenkamp denied this.

He told a reporter in 2000 that he had run arms for Rhodesia, but not for Zimbabwe: “Yes, I was requested by the government of the day (Rhodesia) to help source supplies and equipment for the beleaguered country, and yes, I did so. But no, for many years, I have not been involved in the arms business at all.”

EU sanctions on him were dropped in 2012. US sanctions remained.

Bredenkamp did not always have it easy with politicians. In 2000, Bredenkamp was allegedly involved in moves by Western governments and then UN chief Koffi Annan to pay Mugabe to leave office, Wikileaks cables later revealed.

It was perhaps his alliance with Mnangagwa that got him in some legal trouble. In 2004, he denied allegations that he had funded Mnangagwa’s failed campaign to become Vice President. Suspicion only grew when Mnangagwa’s daughter held a wedding at Borrowdale Brooke Golf Course, co-owned by Bredenkamp and his business associate, the golfer Nick Price.

In 2006, his Zimbabwe businesses were raided over accusations of tax evasion and using a foreign passport. The charges were later dropped.

However, even during that dalliance, Bredenkamp, much like he did in Iraq and Iran, was hedging his bets and playing both sides. One leak claimed he had secretly made donations to Zimbabwe’s opposition, charges that were denied.

In the UK, Britain’s Serious Fraud Office’s investigation raided his offices in a probe into a £110-million commission paid by arms dealer BAE Systems. This tied him to South Africa’s 1999 arms deal, one of the biggest scandals in that country.

In 2008, the South African Revenue Service raided his company Masters International, confiscating 45-million cigarettes. One of the businessmen investigated during that crackdown was Zimbabwean Yakub Mohamed, a Bredenkamp associate.

In 2017, a court ordered the auction of Bredenkamp’s private jet to pay off a loan that he had taken from Mohamed.

Images of a gaunt Bredenkamp leaving court during that case are among the last taken of him. In fact, there are not many pictures of him, a testament to the shadows in which he operated.

Bredenkamp profited from some of the darkest hours of the country’s history, from Rhodesia to the DRC war. From his Zimbabwe base, he ran guns in the Gulf, traded arms from the UK, exploited minerals in the Congo, sold weapons to South Africa and smuggled cigarettes across the Southern Africa.

At his peak, he ran Gecamines in the DRC, exporting cobalt and other minerals. In Zimbabwe, he was involved in fuel, tourism and farming. Many of his commercial partnerships were always rumoured, never confirmed.

He took pride in the fact that, in all the countries where he did business, through different times and changes, he made friends with those in power.

“Perhaps rumours and innuendo are not of interest to such people,” he once said.

It’s not known how much he was worth. In April 2016, the Guardian reported that Bredenkamp has an “estimated £700 million fortune from tobacco trading, grey-market arms dealing, sports marketing and diamond mining.”

Wherever there was chaos and change, Bredenkamp was there to profit from it. In all that, he was spoken of as some dark lord in a shady underworld of Zimbabwe that many of us may never see.

We may never know all the characters that he befriended. We may never learn of the extent to which he and his friends went to make money at everyone’s expense. We do not know which political interests got his money, in his old strategy to always play all sides.

Now gone, he takes with him some of the darkest secrets of the country, and the secrets of all those with whom he profited from chaos.

Budget is ‘positive’, but back up your talk with action on political reform, US...