Gold is rallying globally and leading producers around the world are rubbing their hands in anticipation of a windfall. But unable to pay gold miners and hurt by a poor forex regime, Zimbabwe could yet again be missing out on the bonanza.

The global economic turmoil brought by COVID-19 has seen investors around the world rushing to buy gold, which they see as a safe haven. This has pushed the price of gold to record highs above US$2000 an ounce. While gold has eased over recent weeks, some estimates are that it will still rally next year and test levels near US$3000 an ounce.

For a gold producing country like Zimbabwe, all this should be good news.

So, a gold rally should be a lift for Zimbabwe. But the amount of gold being delivered to Fidelity Refiners, the Reserve Bank of Zimbabwe arm that is the country’s sole gold buyer, is falling. This means the country is missing out on the rally.

A total of 13.4 tonnes of gold had been delivered to Fidelity by August, down from 17.84 tonnes this time last year. Gold deliveries from small scale miners, who mine the most gold, fell 78% in August compared to last year, adding to the 44% year-on-year drop in July.

Why is this happening?

According to Fidelity general manager Fradreck Kunaka, Zimbabwe is unable to import enough US dollars to pay miners.

“This is due to cash shortages caused by limited flights into Zimbabwe due to COVID-19,” he says.

The Zimbabwe Miners Federation, which represents small-scale miners, met RBZ on August to try and press for payments.

Small gold producers are paid US$45 per gram of gold, which is lower than what private buyers are offering. This forces miners to smuggle gold out of the country, depriving the government of critical forex.

“We are losing close to US$100 million worth of gold every month which is being smuggled out of the country through our borders,” according to Home Affairs Minister Kazembe Kazembe. 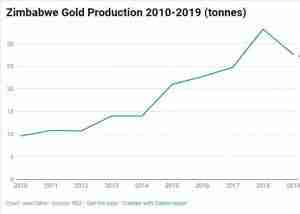 Larger miners are allowed to keep 70% of their earnings. However, RioZim, the country’s biggest gold producer, said in June that it was owed US$2.46 million and Z$65 million in gold payments.

The Chamber of Mines says payment delays of up to eight weeks have disrupted production and affected output by as much as a quarter.

“This has resulted in working capital shortages and production disruptions, weighing down potential gold output to as much as 25%. Gold producers are appealing for a payment turnaround of not more than a week as per agreed payment framework with RBZ,” says the Chamber.

This will not be the first time Zimbabwe missed out on a metals rally due to its own failures. The country missed the commodities boom between 2008 and 2011 as it fought foreign-owned gold miners over empowerment laws. Last year, Zimbabwe could not latch on to a rise in gold prices as it insisted on keeping the bulk of gold miners’ earnings while power shortages cut output.

‘The dam is our hope’: Gwayi dam may bring relief to Bulawayo, but can...