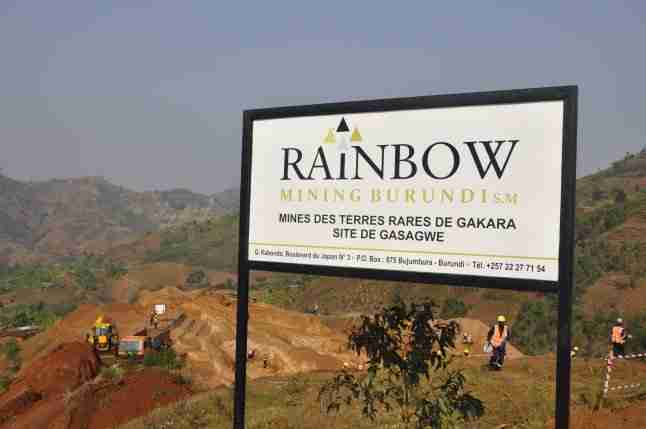 It’s a group of minerals used in everything from LCD TVs to batteries and defence technology, but rare earth elements (REE) have barely had a mention in any talks about Zimbabwe’s mineral potential.

Now the acquisition of ten claims by an East Africa-focused UK firm could point to new interest the country’s rare earths, a part of the country’s mineral resource whose prospect has gone largely unexplored, until now.

Rainbow Rare Earths, listed on the London Stock Exchange, says the land covers a total of 12.6km² in Northern Zimbabwe. The acquisition is part of the company’s strategy to augment its rare-earth portfolio, it says.

The ten properties acquired by the company have only previously been explored for phosphate and cover, the company said in a statement.

Rainbow Rare Earths has acquired these licences through its wholly-owned subsidiary Rainbow Zimbabwe, which will hold 100% of the licences, with no free-carried interest for the government after Zimbabwe dropped the 51% local ownership requirement.

The acquisition, Rainbow says, “aligns with the recent changes to the legal framework covering mining in Zimbabwe”.

Rainbow Rare Earths will immediately begin an exploration programme on the claims including geological mapping, sampling and assaying to conclude an interpretation report that will evaluate the new claims for rare earth elements

Rainbow Rare Earths CEO George Bennet said: “With our strategic intent for our licenses in Burundi well on track, the company stabilised, I believe this is a great opportunity to diversify the portfolio, with low risk and minimal capital outlay.”

Rainbow’s current focus is the Gakara Project in Burundi, one of the highest-grade rare earths projects globally and the only African producer.

Could this acquisition point to a new front in the race for minerals used in anything from renewable energy and defence technology?

In June, President Emmerson Mnangagwa told Bloomberg that “we have been sleeping on them (rare earths); we didn’t know that they were useful”. But he said that Zimbabwe was now looking for the technology and skills needed to extract them efficiently.

According to the Ministry of Mines, Mashonaland Central hosts three likely resources at Gungwa, Mutondongwe, and Nanuta. “While there has not been exploration for REE at these complexes, Gungwa is known to be enriched in lanthanum and cerium,” the Ministry website says.

According to Rainbow, a 2002 report by the US Geological Survey provides a record of rare earths content in the Gungwa deposit which is described as “probably a metamorphosed carbonatite containing several thousand ppm Cerium and Lanthanum”.

In preparation for widening its exploration portfolio, Rainbow raised US$5.1 million in a share placing in London in July.

Rare earth metals are used in the the production of tech products such as computer memory, DVDs, TVs, rechargeable batteries and cell phones. Demand is also being driven by prospects in the growing electronic vehicle market.

Some rare earth elements are also used for components used for defence systems, such as for fighter jets, night-vision goggles, precision-guided weapons, communication equipment and other defence electronics.

Worldwide demand for rare earths is projected to increase 3.5% per annum to 149,500 metric tonnes in 2019, valued at US$4.5 billion. However, demand is seen rising, with one new report from Adamas Intelligence forecasting a 350% increase in rare earths demand from electric vehicles alone between 2018 and 2025. Other estimates see a further 127% increase from 2025 to 2030.

China controls 70% of the rare earth market, and has used its dominance of the minerals in its ongoing trade war with the USA. Australia is currently planning to ramp up rare earths production.

Zimbabwe has been looking to attract investors into mining, but years of underinvestment in exploration have stalled investment. The country recently announced an ambitious plan to grow mineral revenues to US$12 billion by 2023, which would be driven mostly by anticipated new investment in gold and platinum.