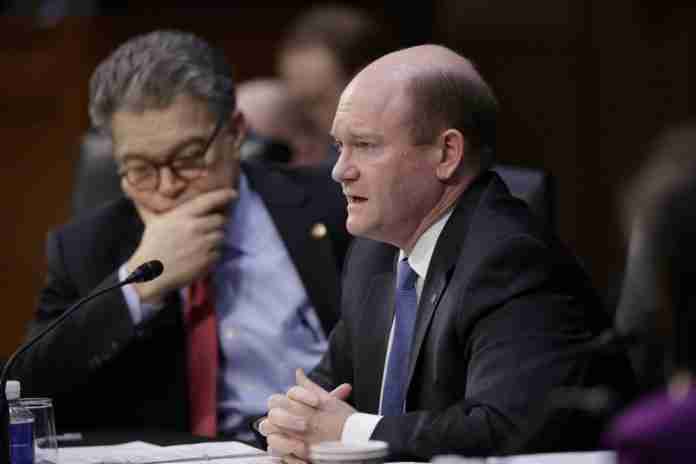 Two influential US senators want America to “enhance the tools at its disposal” to act on Zimbabwe. It’s a sign that US-Zimbabwe relations are nowhere near mending, nearly two decades after sanctions were imposed.

The row, in which one side says it’s all about land while the other says it’s about democracy, has been fought for years behind closed doors, at summits, and now it increasingly plays out to the peanut gallery on Zimbabwe’s hyperactive social media.

Chris Coons, the Senator who has pushed for US action on Zimbabwe and is a member of the Subcommittee on Africa and Global Health Policy, and Jim Risch, chair of the US Foreign Relations Committee, sent a letter Tuesday to Treasury Secretary Steven Mnuchin and Secretary of State Mike Pompeo requesting that the US Treasury update the list of sanctioned persons in Zimbabwe.

They are upset at Zimbabwe’s campaign to blame sanctions for the country’s worsening economic crisis.

“It is important that the United States communicate to the people of Zimbabwe that our sanctions programs are aimed at deterring human rights abuses, public corruption, the undermining of democratic processes or institutions, and political repression in Zimbabwe. They are not aimed at the Zimbabwean people.

“Given the developments in Zimbabwe over the last two years, we urge you to consider enhancing the tools at your disposal, including the use of targeted sanctions, to incentivise changes in behavior by the Government of Zimbabwe,” they said.

“An update to the list of the Specially Designated Nationals and Blocked Persons list should incorporate a balance of new designations with appropriate removals.”

Sakunda, the commodities company controversially funding Command Agriculture and is a frequent target of public criticism by the US Embassy, could likely be added to the new list.

For close to 20 years, the US has maintained two sets of measures against Zimbabwe.

In 2001, the US introduced the first version of the Zimbabwe Democracy and Economy Recovery Act (ZDERA). The US then introduced, via an executive order in March 2003, a regime of sanctions against individuals and some State enterprises.

[Click to read | US sanctions on Zimbabwe: truths, history, and lies]

The US Congress and Senate authorised an updated version of ZDERA on July 25, 2018, just days ahead of elections in Zimbabwe.

Zimbabwean officials, presiding over rising inflation and the threat of what the UN says is a “man-made” famine, blame the sanctions for the economic crisis. They say ZDERA and the measures on individuals and parastatals have isolated the country from banks, multilateral lenders and investment.

The government sees the sanctions as punishment for land reform, an issue that features in both editions of ZDERA.

However, the US blames the Zimbabwe government’s corruption, rights abuses and mismanagement of the economy, and points out its aid to Zimbabwe; more than US$2 billion over the last 10 years.

Relations between the two countries appeared ready for a reset after President Emmerson Mnangagwa invited Western observers for elections, the first time since 2002.

But the US’s refusal to accept the election result, army killings and the economy have seen both sides entrenching their positions further. Zimbabwe’s refrains of Western political interference have been met by equally shrill retorts from US ambassador Brian Nichols.

More recently, the quarrel has played out publicly, including on Twitter, which the US Embassy has deployed in its battle to win the sanctions argument.

In October, the embassy put out a stream of strident tweets to respond to a Government-organised anti-sanctions march.

The embassy’s tweets are keenly watched; a frequent feature are posts of meetings held with various political figures, mostly taken against the background of the embassy’s imposing facade.

This week, the US Embassy in Botswana tweeted out that it had met SADC executive secretary Stergomena Tax and discussed “how failed economic policies and corruption have created the current economic crisis in Zimbabwe”. Tax denied discussing this, saying: “Might be the position of the Embassy, but definitely not SADC’s  position”.

Zimbabwe in 2019 hired a string of lobbyists, including a US$500,000 per year deal with a firm run by Donald Trump ally Brian Ballard. However, it is unlikely that this will shift positions in Washington when the sanctions come up for review in early March.

More likely, the two sides will find more bile to feed a bitter sanctions standoff that, by next year, would have gone on for a full two decades.

OPINION | Govt’s bank lending ‘nuclear bomb’: A truce will come, but the damage...

REVIEW | Your top newZWire reads of 2022

Mangudya: We’ve had to fund infrastructure on our own, the downside is inflation