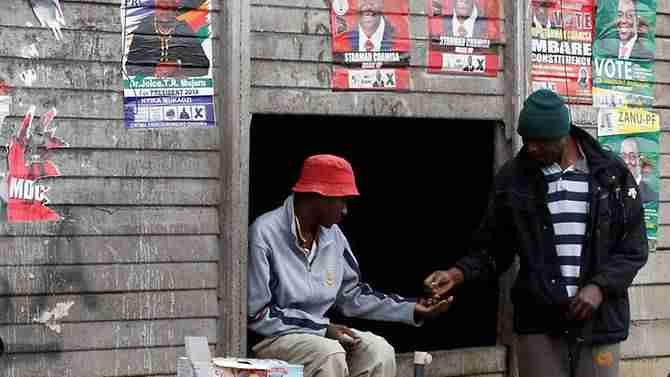 They will lie about their achievements, and lie about their promises. They have studied us. They know what we want to hear; we warm to hopeful and positive messages, and we hate painful truths. So they lie.

And how can you tell when a politician is lying? When their lips are moving.
It’s an old joke, but one that fits quite well into Zimbabwe’s 2018 election campaign.

While the campaign thankfully measured low on the violence gauge, it certainly was off the charts on the Pinocchio scale. It got so bad that people were now debating whose lies were worse.

ZANU-PF, obviously unhappy about the entry of new competition in the deception business, a sector it has monopolised for decades, mocked Nelson Chamisa for his lies, while supporters of the MDC Alliance leader shot back, saying it was time for fresh lies, not old ones.

Here, newZWire gives a collection of some of the finest fibs of the campaign, in no particular order.

The ZANU-PF manifesto was launched early May, on a very breezy morning. But there just wasn’t enough cool breeze to cool the hot air from the manifesto.

Not only did the ruling party promise to build 1.5 million homes in five years, they also showed that they had learned nothing from the 2.2 million jobs in the disastrous 2013 manifesto, which was really a Moyo-Zhuwao comic book disguised as a policy document.

The big manifesto lie this time?

“In the 2013 People’s Election Manifesto, ZANU-PF promised to create 2.2 million jobs. Over the past five years, 4.5 million have been gainfully employed in new jobs in both the informal and formal sectors, with agriculture, mining and manufacturing contributing over 80%,” the ZANU-PF 2018 Election Manifesto says on page 54.

Well, in fact, as newZWire has reported, Zimbabwe lost over a million jobs over the last four years. The Zimbabwe National Statistics Agency’s 2017 inter-censal demographic survey shows that the country’s economically active population declined to 5 611 809 last year, from 7 065 311 in 2014.

One didn’t even need to refer to Government’s own data to tell this was a lie. Surely, anyone who holds packed rallies during working hours, smack in the middle of a working week, would know this.

“I helped Kagame”
At a rally in Beitbridge back in May, Nelson Chamisa suddenly remembered that he had a glittering CV, which included helping Paul Kagame with Rwanda’s much celebrated ICT policy. So he shared it with his adoring supporters.

“I helped him (Kagame) with his ICT policy when I went to Geneva with Mugabe,” Chamisa said. Well, we all know Kagame. He is never one to allow anyone else take credit for anything. He said he didn’t know Chamisa and had never had a discussion with him.

1st my name is Kagame not kagama 2- I don't know this man & no discussion ever happened with him anywhere …3rd Rw's ICT policy,projects & progrm started before mdc formation and politics! I wish the people of Zim.well ! https://t.co/2vEQXsiPDT

Chamisa came back on some, “don’t you remember me bro”…

Your Excellency, you're not expected to remember everything. We met at a conference a few years back & you requested your ICT DG to get a copy of a presentation I had given.

There's a generational consensus across Africa that your leadership of Rwanda is progressive & inspiring. pic.twitter.com/AamOUAX2Ju

Well, that didn’t help much. That entire episode hurt a lot the feelings of Chamisa fans, a lot. They went in on Kagame. But, posting 2009 pictures of Chamisa with Kagame didn’t quite work as evidence that he had helped build an ICT policy developed in the 90s.

Remember that time Jack Bauer escaped the clutches of the Secret Service? No weapon, no army. Just his wits. He burned his pursuers with steam valves, hijacked a boat that had wheels and made good his escape. Or the time he escaped a seaborne Chinese prison using little more than a meat cleaver?

That is how we are told Emmerson Mnangagwa escaped the country that dark night of November 6, after Robert Mugabe fired him. Mnangagwa’s son, Emmerson Jr, told the UK’s Sunday Times a tale of a rogue Renamo rebel putting a gun to his father’s head, the President crawling on his belly through Mozambican marshland, hiding in caves, and other Bauer-style heroics.

And then VP Chiwenga told us, instead, that ED had escaped with the help of soldiers. Chiwenga’s account, one of many on the episode, spoiled the fun. On the campaign trail, Mnangagwa loved talking about his border-jumping tales. Who wouldn’t want to vote for a man with such Jack Bauer levels of badassery?

In May, the CDC, the development finance arm of the British Government, announced a $100 million fund for Zimbabwean private firms. It was a big deal, given this was the first such funding to Zimbabwe in 14 years.

But trust politicians to spoil good news with their misplaced zeal. At a rally in Mutare in May, Mnangagwa claimed the money was meant to ease cash shortages.

“The British Prime Minister has so far sent three envoys into the country and we had talks with the British this week and just last Tuesday, they gave us $100 million to ease the cash crisis in our country,” he told a cheering crowd at Sakubva.

Responding to an accusation on Twitter that Britain was “funding the regime”, British deputy ambassador to Zimbabwe, Simon Thomas, said the accusation was “utter nonsense. Read the CDC group Press statement…not a cent is going anywhere near government, let alone political parties”.

There were attempts to spin ED out of the fix. What he meant was that the $100 million would help exporters grow and, ultimately, help ease the cash crisis, we were told. Well, if he meant to say that, he certainly would have.

In December, Chamisa led a team of party leaders to testify before the US Senate Foreign Relations Committee. In May, while campaigning in Mutare, he claimed that the delegation had met Trump, who had promised them a $15 billion package.

“When we met Trump,” he said, “he asked us, ‘boys, how much money do you need to move the country forward?’ Mr (Tendai) Biti had already done his calculations. We told him $15 billion.”

US embassy spokesperson David Macguire denied it: “We do not make such promises to individuals or political parties.”

On BBC HardTalk, Chamisa, remarkably given viral videos, denied ever saying he met Trump. “No no, what I mean is, it wasn’t true. All those statements were said by other people, not what I said”.

But, insisted Sackur, there’s video. Chamisa said he only meant that he met the Trump administration, not The Donald himself.

Not true either, the US embassy said a few days later. US Embassy Charge D Affairs Jenifer Savage, on a radio show, said the MDC Alliance delegation had not met Trump or any member of his administration. “He had meetings with the US Congress, which is a separate pillar of our government”.

Well, isn’t it a good thing that voters don’t care much about lies? If ZEC disqualified candidates according to how much they have lied big, we would have run out of candidates. Except, maybe, for Bryn Mteki, seeing as his lips have barely moved since nomination court.