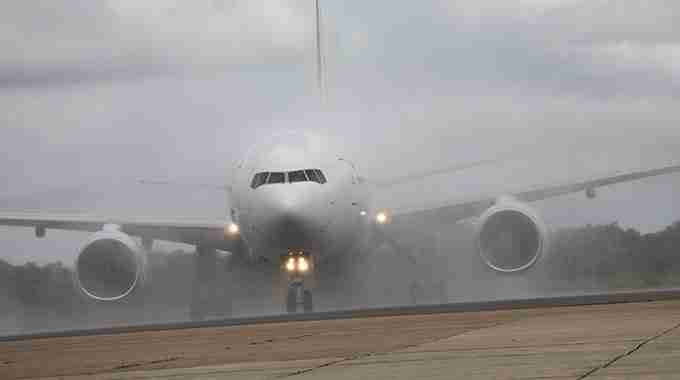 Air Zimbabwe recently took delivery of a pre-owned Boeing 777-200ER aircraft, and as the goings on at Air Zimbabwe so often do, this event sparked mixed reactions, especially considering the manner in which the planes were acquired.

At the heart of such polarising debates, inevitably, is the ‘small’ matter of the profitability of Air Zimbabwe, and its cost to public taxpayers.

The ferocious debate raging in South Africa, with regard to continual government bailouts to the perennially loss making South African Airways, which is threatening both South Africa’s fiscal health and its international credit ratings, will obviously not have been lost on Zimbabweans, in this context.

For years now, the unbridled descent of Air Zimbabwe has shown no immediate signs of abating. Strikes, allegations and counter allegations of mismanagement have hemmed-in the airline, choking the very life of Zimbabwe’s flag carrier in the skies.

And of course, the story of Air Zimbabwe, like most of the country’s state owned enterprises would not be complete without mention of the “illegal sanctions,” and their effects on the country.

‘Blame it on the sanctions’ – the default response for everything that is wrong in Zimbabwe.

Said Acting President Chiwenga while receiving the plane: “As you may recall, state enterprises and parastatals used to contribute around 40% of our country’s Gross Domestic Product.

Unfortunately, most, if not all, of these public entities have suffered from a host of challenges, including the economic decline caused by illegal sanctions imposed on us by the determined and unashamed perpetrators of underdevelopment in third world countries.”

Why do African airlines fail?

To understand why African airlines in general, and Air Zimbabwe in particular fail, it may be worthwhile to look at one of the most successful airlines in the world, and what makes it stand out from the rest. This brings us to Emirates Airlines.

Since 1985, this government-owned airline has grown from a two-plane operation at a desert airstrip into the world’s largest long haul carrier.  Consider this; nine Emirates A380s land in London every day, five in Bangkok and four at JFK airport in America.

Johannesburg gets four daily Boeing 777s, Cape Town three, and Durban one. That is not all; Emirates also has a plane that carries a record 615 passengers on a non-stop 14,200km route from Dubai to Auckland, New Zealand.

And this success from this relatively young aviation ‘wunderkind’ has been down to mostly luck and protectionism. From a fuel and flight-time perspective, the Persian Gulf is the most geographically efficient place on the planet to run an airline from, it connects Europe with Southeast Asia and Australia, and the U.S. with India.

Furthermore, strikes and protests at the airline are not a cause for concern, as unions are banned in that country.

Emirates does not have to worry about the taxman, as corporate and income taxes are nil.  Dubai International airport runs at full speed 24 hours a day, allowing Emirates to optimise connection times for its vast route network.

This is unlike say, Heathrow Airport, where the rights of the nearby public to sleep without noise from overhead jets means the airport closes after a certain hour. All these factors coalesce to make Emirates the success it is today.

Regardless of how efficiently you run an audio cassette rental business, it just will not work in today’s world of digital music streaming platforms. This is more or less the scenario that Air Zimbabwe and most airlines not just in Africa, but the world, over face.

Why would any rational human being, for example, come down to Harare, which is near the southern tip of Africa, to then fly anywhere else in the world? In today’s market, it is very difficult to compete with airlines such as Qatar, Etihad and Emirates, collectively known as the Middle Eastern-3 (ME3) because of their geographical location and their traffic connection hubs.

Put simply, a locally operated airline, outside the longitude such as the one the (ME3) find themselves in, will just not have any economies of scale, to compete globally. That is just the permanent state of play. ME3 1 – Rest of World 0!

Regional routes to the rescue?

What about regional routes, one might ask. In Africa’s case, the existential reality is that regional routes are just not lucrative enough for airlines. Africa as a whole only has about 2% of global passenger traffic, according to the International Air Traffic Association (IATA).

Even on the cargo front, Africa still fares dismally.  IATA estimates that air cargo represents more than 35% of global trade by value, yet Africa only captures 1.9% of air freight market.

A poisonous mix of protectionism, high taxes, and restrictive regulations by African governments ensure that the growth of the aviation industry in Africa remains stymied. Traveling around the continent of Africa is indeed a test of one’s nerves, not least because of the cost. More importantly, however, some analysts contend that it would take at least 20-30 years for the middle class in Africa to grow to the size that wold support extensive aviation in Africa.

There is just not enough wallet share to capture on the continent. Ethiopian Airlines, commonly touted as the success story of Africa’s aviation industry, has done so by successfully connecting mostly international traffic through its hub in Addis Ababa, and not by selling tickets within Africa.

The domestic market will obviously not require the wide bodied long haul planes, such as the ones recently acquired by Air Zimbabwe. And bearing in mind the muted domestic demand for air travel, one might be hard pressed to see just how Air Zimbabwe might turn the corner, back into the black.

Then there are basic things like the right skill sets, and the right IT systems that have to be in place as a precondition for any modicum of success in this industry. Unfortunately, these are things that Air Zimbabwe currently does not seem to have a firm grip over.

In Air Zimbabwe’s case, one also has the rather arduous task of factoring in the occasional misappropriation of funds, underhand dealings, and a dose incompetence all into the forces that will conspire against the success of Air Zimbabwe.

In sum, Air Zimbabwe as a business does not have a compelling case for economic survival, and is irrelevant in today’s world. No tax payer money should be wasted propping up this entity.

Read more from Perry Munzwembiri on his blog, Carte Blanche with Perry

Masiyiwa’s Econet weighs bid for Ethiopia mobile licence, but it will not be an...

Compensation: Zimbabwe to return farms protected by BIPPAs, but only if it’s ‘practical’

Unki says operations have ‘ground to a halt’ after ZIMRA garnishes US$24m over royalty...