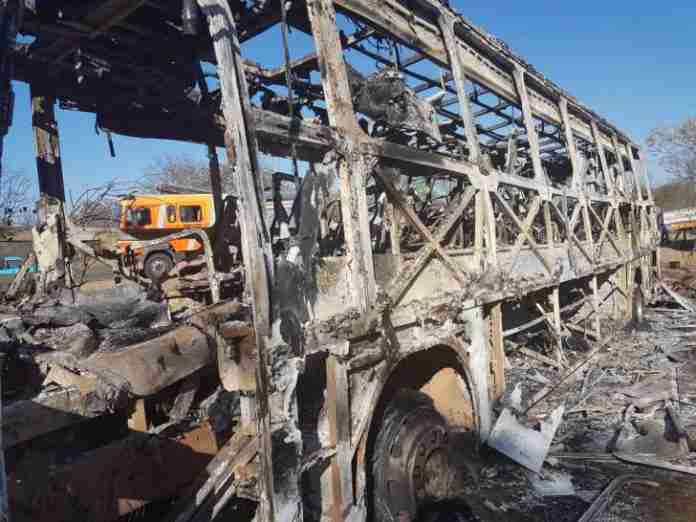 On the evening of 7 November, two long distance buses operating as Smart Express and Bolt Cutter sideswiped in Rusape. Sadly, 50 people lost their lives and another 70 people suffered varying degrees of physical and psychological injury.

These are those affected directly by the accident; we have not even begun to look at the extended effects on family, friends, colleagues and the nation at large.

The November 2018 Rusape Bus Disaster is not the first bus disaster the nation has suffered. It may be the first major bus disaster this year but certainly not in the last two years. In June last year, 45 people died when a Zambia-bound King Lion bus rammed into a tree in the Nyamakate area in Hurungwe.

Extent of Disaster
The TSCZ cites the major cause of road traffic accidents in Zimbabwe as “human error”. This encompasses, speeding, overloading of vehicles, failure to observe road rules, among others. All this is before we start looking at the mechanical issues, including worn tyres, worn suspension, and faulty breaking systems.

The recent Rusape Bus Disaster has again raised key regulatory questions, as have most previous accidents. The main issue being that of failure to enforce the law as touched on in my previous newZWire article, Opinion – Harare Traffic Nightmare: Time to Enforce the Law.

Mandatory requirements such as speed limiting and monitoring devices are covered in the myriad of legislative instruments noted above. We have a crisis of implementation and enforcement and not one of a deficiency of rules. Perhaps, they need revision and compilation into a more comprehensive and accessible form.

The Commissioner of Road Motor Transportation (RMT) regulates the operations of public service vehicles. The RMT Act lists the powers of the Commissioner as follows:
a. to instruct an inspecting officer to examine any vehicle and to report to him on its condition and suitability for the conveyance of particular goods or passengers; and
b. to conduct such investigations as he considers necessary to assist him to come to a decision regarding the issue, operation, suspension, cancellation, renewal or amendment of any licence, certificate of fitness or route authority in terms of this Act; and
c. to examine or cause to be examined any records pertaining to the operations of the holder of an operator’s licence; and
d. Generally, to do all things that are reasonably necessary to ensure that holders of licences and authorities issued in terms of this Act comply with the terms and conditions of their licences and authorities.

Effectively, the Commissioner of RMT has the powers of a commission of inquiry when investigating an accident or a transport operator under their purview. These powers are vast and grossly underutilised.

In my experience, there has never been a comprehensive investigation of any major accident.
On asking some transport operators, the general consensus is that the regulator is there only to collect fees and issue permits (operator’s licences, route authorities, cross border permits). As long as one can produce a certificate of fitness for their vehicle, one is almost guaranteed that they will be issued with an operator’s licence.

Operators only need to worry about passing the annual vehicle roadworthiness (fitness) certification with the Vehicle Inspection Directorate (VID). The RMT page on the Ministry of Transport and Infrastructure Development website is a reflection of the Commission’s understanding of it duties and powers. It is entirely dedicated to the requirements for licences and permits, and their costs. As with most government websites and webpages, it is almost devoid of relevant information and statistics. When such a critical department concentrates on rent-seeking activities, it is small wonder that the public service vehicle sector is in such disarray.

Beyond the regulator are the owners and operators of the public service vehicles. They seek profit above all else. The industry standard for passenger vehicles has become that of a daily cash target based on as few trips as possible. This leads to the overloading of by drivers and conductors in order to maximise their own profit. The fewer trips that they do to meet the target means that they pocket any excess. The owner/operator is hardly ever given any amount exceeding the day’s target.

Bare bones vehicle maintenance is the order of the day. The adage, “if it ain’t broke don’t fix it” often comes into play. For as long as the vehicle can go from point A to point B there is no need to spend money on it. The only time that some vehicles see better service is for their annual certificate of fitness. Annual vehicle inspections without any review process allows our public transporters the luxury to avoid performing necessary vehicle maintenance.

Hampered and Hamstrung Traffic Safety Council
The TSCZ is a statutory body that was formed through the Traffic Safety Council Act [Chapter 13:17] in 1999. Its primary functions, are as follows:
• to promote safety on the roads;
• to disseminate information on road safety;
• to publish the highway code;
• to control and regulate driving schools and persons who provide instruction in the driving of vehicles on roads;
• to establish standards of practice to be observed by driving schools and to improve the quality of training provided at such schools;
• to establish standards for testing of persons for the issue of learner licences and certificates of competency;
• to affiliate and liaise with other road safety organisations whether in Zimbabwe or elsewhere;
• to advise the minister on all matters relating to road safety; and
• to do any other thing that the Council may be permitted to do by or under this Act or any other enactments
From these statutory functions, we see that the Council’s mandate is that of an advocate for road safety matters without any real powers to cause meaningful change beyond pushing for better driver education.

The Council’s funding comes from budget allocations from the parent Ministry of Transport and Infrastructure Development as well as a small percentage from vehicle insurance levies. The rest comes from fees charged for its activities, driving school regulation, Highway Code publishing, Defensive Driving Courses, etc. as well as donations and sponsorship.

Where to from here?
The stakeholders in the public transport sector need to make firm commitments on improvements to their operations.
The RMT Commission should be revamped and capacitated with necessary skills and resources to perform operational reviews of transporters and accident investigations. The core function of being the public protector in matters of public service transportation must come to the fore and take precedence.

The Traffic Safety Council should be given greater voice in the guidance of Ministry and RMT Commission policy and activities. For what it is worth, they have been doing a wonderful job regarding the promotion of road safety and spreading information via numerous media channels. The Council’s website, however, does need updating with more information. It is currently a wasted tool with great potential.

The Zimbabwe Republic Police (ZRP) needs to deploy a well-trained and conscientious police service on our nation’s roads. The deployment of numerous roadblocks is not the answer, but rather having a regular presence on the roads in key areas that communicates the movements of public transport vehicles. In so doing, they can establish which vehicles are over-speeding and reprimand them accordingly. The ZRP is the custodian of the roads in the absence of all other agencies and departments. They are the enforcement arm of the regulation chain and must own their role.

The VID should consider a greater distributed presence on major highways to inspect public transport vehicles. The annual inspection process is prone to corrupt practices by both the transport operators and the inspectors. It is clear that corrupt practices at the VID lead to injury and/or death of road users. The issuance of a driver’s licence to a person who has not shown the required level of competency. The issuance of a certificate of fitness for an uninspected vehicle or the clearly falls short of the minimum standards and requirements.

Local authorities should ensure the availability of bus termini, “ranks”, and bus stops that are well maintained, safe, and clean for boarding of public transport vehicles. These facilities allow passengers to inspect the vehicles before embarking without pressure. They also remove extraneous vehicles from the roads and alleviate unnecessary congestion on our roads.

The Ministry of Transport and Parliament need to review and implement the action points from the various stakeholders meetings they have held over the past 20 years. Each time there is a major road disaster, there is outcry on mostly similar issues, but after a month, these are set aside and forgotten until the next disaster. By avoiding policy changes, they are complicit in all future accidents of a similar nature.

In short, government departments and agencies need to go back to their founding principles and charters, retrain their staff and perform their functions with the highest level of professionalism and diligence.

Transporters need to set aside the want of the abnormal profits that they have been enjoying and plough back into their vehicles. There is a clear need for them to train and/or retrain their drivers and ancillary staff as well as install and implement all the necessary equipment and features on their vehicles as required by law. The sector should establish clear guidelines and principles of operation that emphasises on safety and professionalism. These are enforceable firstly by internal reward and punishment systems, and externally by the enforcement systems of the relevant government agencies and departments.

The public should be educated earlier starting from the school curriculum – catch them young. They must be encouraged to look out for their safety first, not just the expediency of getting from point A to point B. They must use the appropriate boarding and disembarking facilities and insist on their rights as passengers from the transport operators. By encouraging speeding and reckless driving, passengers quickly and easily become complicit in their own injury and/or deaths, or those of others.

Nothing I have written here is new. I have simply put together segments of 20 years’ worth of outcry for better public transport management.

We are all each other’s keeper; let us act like it.

The author, Mike Murenzvi, is a driver with an opinion.

“Very arrogant”- the ANC’s view of ZANU-PF, according to spy-turned-diplomat