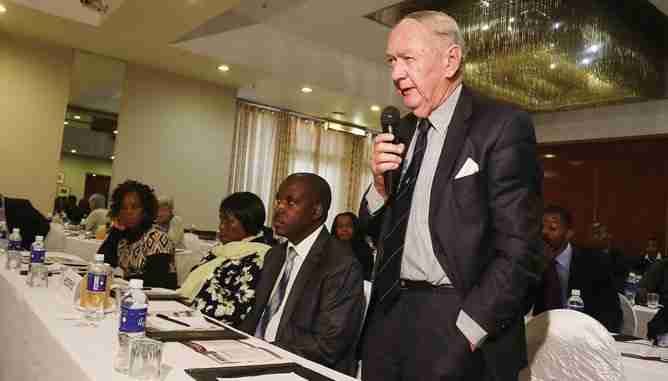 After weeks of conjecture we had the first budget of the new Government on Thursday. The Minister was not thrown by the chaos that resulted when the MDC Members refused to respect the State President and were evicted from the House. Just what they thought they were achieving by this carefully managed manoeuvre is difficult to imagine. In the end they just looked like spoilers.

The new Minister is not a politician, he is an academic and has worked all his life in the financial sector and at various Universities. He is extremely bright and widely respected and anyone who takes him on is going to experience that. When Tendai Biti took him on in one of his early question times, he soon learned that he was a clever lawyer – but no match for Mthuli in the economic sphere.

In returning to Zimbabwe to take up this job he has made considerable personal sacrifice – as have his family who have lived outside the country for nearly two decades. I warned him on arrival that he should not underestimate the size of the hole that Mr. Mugabe had left us in and should not come to any quick decisions about what to do first. My advice was to listen to everyone for three weeks and then to slowly find his way across the river. As Deng Zhou Ping said in 1976, ‘feel the bottom of the river with your feet as you move forward’.

Being the Minister you are at the pinnacle of the Ministerial team, you control the lives and futures of everyone and you are subjected to advice from every quarter of the compass. On top of that, in his case, he has no political base and has to rely on the man who appointed him to his position for support when he has to make tough decisions – which is every day. If the support for his decisions is not clear and unequivocal, it immediately undermines his authority and control, with disastrous results. So our Minister of Finance has to be a bit of a magician.

I was a bit disappointed in the budget. I felt it was very conservative in its estimates and that we will do better than forecast. I also feel that the main cause of the present problems in the retail markets with shortages and price uncertainly was the present monetary policies of the Reserve Bank, which, in my view is based on many false assumptions and distortions. The mantra that we are trading at 1 to 1 in respect to both the false currencies – the ‘Bond’ note and the so called ‘RTGS dollar’ is just ridiculous. The Minister does not believe that but has bowed to the views of the Reserve Bank Governor, who is clearly out of his depth. The facts are there for all to see – to imagine for one minute that I could ask my bank to pay out my bank balance in real US dollars and find service, is just plain nonsense.

If I took $1000 in bond notes to the Reserve Bank and asked for real USD in return they would look at me as if I was crazy. If they did so, we would have a million people queueing outside the bank in five minutes. I was always amazed at how quickly Mr. Mugabe destroyed value and accumulated massive problems during his time as President.

He won the 2013 elections and inherited a budget that planned a surplus of US$100 million. In six months he turned that into a deficit of US$500 million. After five years of rapid growth and recovery under the GNU with low inflation and no shortages of anything and almost no restrictions – we shifted to low or negative growth, rising inflation and shortages – the hard currencies we had been using so freely under the GNU began to disappear. By 2017 hard currency had virtually vanished, the Banks were no longer paying out in real USD, inflation was beginning to surge and our accumulated debt and bank balances in various forms of false currency had reached an astonishing 115 per cent of GDP.

We blithely continued to trade as if we had real money in our bank accounts until the magician arrived. He looked into his crystal ball and saw that the stuff we had in our accounts was in fact not real money, like the boy in the fable about the King who was persuaded that he was dressed when in fact he was naked, the magician turned away from his crystal ball and stated – ‘this stuff is not real money and it has no relationship to the US dollar’. What!! The reaction was immediate and in fact a bit funny if you look at it from the outside, we rushed to protect value – buying goods and assets and especially any that were valued at the false rates – like fuel and some other imports. The informal market for Bond and RTGS collapsed to 7 to 1, business began to think that Mugabenomics was back and they priced their goods as if the rate would continue to slide.

I do not think the IMF or the World Bank have any idea of just how this economy works. I think our real economy is worth perhaps US$55 billion – not US$19 or the new values ascribed in the budget. I pointed out last year that Zimbabwean financial institutions handled US$120 billion in financial transactions. EcoCash handling, by itself, double the financial transaction of all Commercial Banks combined. When the Minister of Finance in 2009 jumped off the bridge and lifted all controls – who could have predicted the result – in weeks all shortages vanished and we were trading in hard currencies quite freely. We had no reserves – not a cent, all our Banks and the Reserve Bank were bankrupt. In the succeeding 4 years the average growth in revenues, in real money, to the fiscus was 70 per cent per annum! Explain that.

So back to the budget, in my view we should have concentrated on balancing the budget – a planned deficit of $1.6 billion is just too much. In our condition we need a balanced budget. In addition, rather than spending three quarters of the budget trying to increase taxes and levies on the formal economy, we already collect near world record taxes, we need to free up the formal sector by rationalising all the taxes that we pretend are not taxes – NSSA, Aids Levy, Training Levy, Standards Levy, Licence Plate charges, fuel levies – switch them from cents to percentages. We need to cut PAYE – tax free incomes up to $500 a month, wealth taxes on the real high rollers, reduce corporate tax to regional levels.

Then spread the net to make sure everyone shares the burden of financing government. Close the loopholes at our borders and collect $1.5 billion from imports, increase indirect taxes to spread the net as wide as possible. We must give the magician credit for a number of major initiatives – he has dealt with the fiscal deficit; we need to maintain that stance of no borrowing to meet recurrent expenditure. He has lifted import controls that were fostering corruption and artificially restricting supplies and given all Zimbabweans the right to hold real currency balances in their own accounts. This is the clearest evidence that the magician does not recognise the RTGS and the Bond as real currency on par with the USD.

But one major hurdle remains, and it is no use trying to imagine we can deal with that ‘gradually’. It is like saying a horse can go over a hurdle ‘gradually’. The issue is exchange control. In Zimbabwe this means we take real value from our exporters and transfer it to the consumptive sector. Right now this is destroying our cutting edge industries and boosting unsustainable demand in the consumptive sector. At the same time, it is fostering corruption on a large scale and distorting prices and costs throughout the economy.

This simply cannot go on and in my view it must be dealt with immediately. The way to do that is to stop all assumption of control by the Reserve Bank of foreign exchange earnings and allow the market to determine the real value of the RTGS and the Bond. Eventually we need our own currency and a strong, independent Monetary Policy Committee or Board. Restore the freedoms of the GNU era and the Zimbabwean economy, like a race horse, will take the bit between its teeth and run the race ahead of us. I have no doubt it will win.
___

Eddie Cross is a former MP of the Movement for Democratic Change and the party’s former economic secretary.

South Africa turns down $1.2b loan for Zim, in talks to help debt payoff