Can technology help to slow down the rate of road accident related carnage in Zimbabwe? Something needs to be done to reduce the number of people being killed on our roads.

The World Health Organisation (WHO) Global Status Report on Road Safety launched in 2015 showed that in Zimbabwe, road traffic deaths involving public transport vehicles are responsible for the most deaths on our roads. Reining in errant driving by public transport operators needs our attention.

At the Cabinet meeting of 13 November 2018, one of the outcomes involved putting in place measures that would prevent road public transport accidents. Some of the resolutions included:

I believe that in addition to these Cabinet resolutions, a possible solution could be to investigate and embrace the use of technology in controlling the way public transport vehicles behave on the roads.

The traffic safety council in its 2017 annual report stated that there were 42,430 road traffic accidents in 2017. This was a 10% increase over the number of accidents that happened in 2016. The report also lists the main causes of the accidents as “speeding, vehicle defects, inattention or misjudgment and failure to give way”.

The 7 November accident that took place near the Rusape tollgate showed that the Smart Express bus driver was trying to overtake a haulage truck in a no-overtaking zone. This led to a head-on collision with the Bolt Cutter bus. 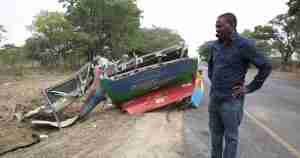 The Herald article of 10 November 2018, entitled “Smart bus owner accepts blame for Rusape crash”, carried an interview with the manager of Smart Express Bus company, who revealed that “the company always instructed its drivers to exercise caution on the road and to drive within the stipulated speed limits but sometimes the drivers behaved differently.”

When public vehicle drivers are chasing daily cash targets they are prone to speeding.

To make a slight deviation. The laws of physics show us that the faster a vehicle travels the longer the time and the further the distance that passes before the vehicle stops when the driver applies the brakes. Heavy vehicles travel even further and take even longer to stop when the brakes are applied.

Research conducted by Arrive Alive in South Africa show that a heavy vehicle stops after 116metres and 12.4 seconds when it is travelling at 60 km/h. At 80 km/h, this distance increases to almost 200metres and 16.1 seconds. In the event of an emergency, a bus travelling at 100 km/h will not be able to stop quickly enough to avoid a serious accident.

What do stakeholders and lawmakers have to say?

When tragic accidents happen, there is a call for stakeholders for government to look at ways in which further loss of life on our roads can be prevented. In the past, various stakeholders have made a call for the use of speed governors in managing bus speeds.

The use of speed limiting devices is required by law. Statutory Instrument (SI) 129 of 2015 that deals with Road Traffic Regulations states under section 64, with regards to speedometers, that no person shall drive a vehicle without a speedometer, which must have a light that sufficiently illuminates the speedo clock.

A public service vehicle must be fitted with a tachograph, a tacho-log, vehicle data recorder, fleet manager, co-driver or any other speed monitoring device which the Minister, after consultation with the Standards Association of Zimbabwe, may gazette.

A tachograph is a machine inside a vehicle that records speed, distance travelled and stopping periods, used to control the driver’s legal hours of work.

Speed monitoring devices are instruments that have an in built facility in them used to record and store historical data covering information such as speeds travelled, acceleration and deceleration patterns, braking and engine performance. These devices must be retrievable and accessible to authorities so that the information stored in them reviewed and analysed in the event of a routine inspection or after an incident occurs.

A speed limiting device is a device that primarily controls the fuel feed to the engine of a vehicle in order to limit the maximum speed of a vehicle to match the speed that was set in line with a country’s speed limits.

Speed Limiting Devices and implementing them

The enabling instrument demanding the use of speed limiting devices in public transport vehicles exists. However, enacting the instrument requires a holistic approach by all transport sector stakeholders.

If the government was to enforce the use of speed regulators in the buses, there are a few ideas that come to mind.

Some buses come with inbuilt speed limiting devices that are fitted on the bus whilst it is being built at the factory. These limiting devices require activation by an approved in-country authorised agent for the bus manufacturer once the bus has arrived in its respective country of operation. This approved agent would then activate the speed limiting device and set it up in line with the country’s speed regulations.

Setting up of designated border posts to strictly handle the importation of buses could be a route to take by government. The importation process of the buses would then include an extra stage that includes the compulsory activation of a speed limiting device done at the cost of the bus importer. A separate office complete with workshops at the border posts can be set up that houses officials from the Standards Association of Zimbabwe, Vehicle Inspection Department and the Central Vehicle Registry.

The workshops will be manned and operated by an independent contractor or a group of approved independent contractors allowed to activate speed limiting devices on buses of different makes. Upon activation of the speed limiting device on the bus, the officials from SAZ and VID would then carry out tests on the bus to ensure that the bus is maintaining the maximum pre-set speed.

If the bus passes the test, officials from CVR stationed in the same area would then issue the bus with number plates. A computerized vehicle database would then be maintained at the border, where details of the speed limiting device activation process would be added alongside the bus registration details. When the bus undergoes routine inspections by VID at any depot in the country, VID officials can continuously check that the speed limiting device is still installed and functional in the bus without tampering.

SI 129/2015 carries a provision for the use of a fleet manager or a vehicle data recorder in the monitoring and control of bus fleets.

A fleet management system takes care of some of the limitations associated with speed limiting devices.

A fleet management service provision expert based in Harare, Daniel Amira of Arima Energy Solutions, shared the following insights regarding the limitations of speed limiting devices:

“If you have a system that can accurately monitor the vehicles and their drivers’ behaviour, then you will be able to report and be in a position to act in a disciplinary manner if required. For example, if a driver who is carrying members of the public drives in a dangerous manner, they must be held accountable for their actions. If they speed, they must be fined. If they overtake around blind or dangerous corners then they must be fined. We firmly believe that government needs to step in with a third party solution. If the driver’s behaviour can be reported on a daily, weekly or monthly schedule then their licenses can also be linked to the system. Each individual driver will have points deducted on the system, if they drive unlawfully. If they have too many points deducted then they would be banned from driving passengers on the roads,” says Amira.

A comprehensive fleet management system would have features that include monitoring and reporting of:

The fleet management system includes the following benefits to the fleet operator:

In conclusion, technology is available in Zimbabwe that can be rolled out by fleet management experts to help make our public roads safer. The rate of loss of life justifies the effort needed to change the way public transport operators carry out their business. I hope we can begin to think about using technology more in our fights to reduce road accident related deaths.

The writer, Tich Muzira, is passionate about all things related to technology