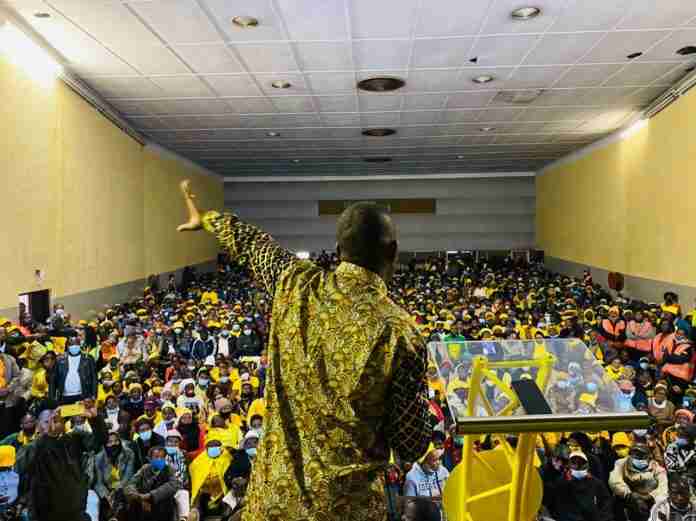 At the beginning of last year, I wrote an article in which I promised that “the fog will soon clear”.

The article was at a time when the movement was facing adverse circumstances. It was a message of reassurance to the millions of people who believed in us; people that had stood with us in times of great adversity. I knew that many of our supporters were anxious and worried. I wanted everyone to know that we were calm and still in control.

I was never in doubt that we would overcome the State-sponsored machinations against us. As a man of faith, I believed that the obstacles being placed in our way were merely testing our resolve and that we would come out stronger. As everyone now knows, the fog has now cleared.

Back in 2020, our movement became a target of a deliberate and systematic attack by authoritarianism and tyranny. Our oppressors had realised that we were not for sale at any price. Their efforts to co-opt or neutralise us through vehicles like President Emmerson Mnangagwa’s pet project, the Political Actors’ Dialogue had failed.

It, therefore, created and supported a surrogate unit made up of old comrades who had turned rogue. This reactionary outfit, the ailing red party, was instrumentalised by the oppressors to drive us into extinction.

Soul of the movement

Operating in cahoots with each other, they went on a spree of firing our legitimately elected representatives in Parliament and local authorities. They grabbed our headquarters. The oppressors diverted our income under the political parties financing legislation, giving it to their surrogate. They even went after our name. Although they misappropriated these material possessions, they did not realise that they were meaningless without the soul of the party. And the soul of the movement is vested in the citizens.

The best victories in war are won without fighting. They wanted a brawl over these things, but we chose peace and walked away. Some thought not fighting was a weakness on our part. They did not understand that we were playing the long game, rooted in the citizens. We were going to trust the court of public opinion, the citizens.

On January 24, 2022, much to the surprise of our detractors, we delivered a new baby, the Citizens Coalition for Change (CCC) and, in an instant, we painted the entire nation yellow.

Everywhere we went, we were greeted with great love and affection. It was as if this Citizens Movement had been in existence for decades. It was and is a humbling experience.

If anyone was ever in doubt, the campaign rallies across the country confirmed that the fog had cleared. The surrogate organisation had been created to cause division and confusion. The oppressor wanted to create the impression that the opposition was divided. The aim was to suffocate and immobilise us.

Unfortunately, the gullible among us bought the ruse. We told them that the fog would clear, but while many understood us, some remained doubtful. They were taken in by the false narratives that were already consigning us to the margins, suggesting that we were finished. They now know that they were fatally wrong.

The results of the just ended by-elections have put all those doubts to bed. We won 19 out of the 28 seats that were on offer. That’s 67,9% or more than two-thirds majority of the available seats. We also won 75/120 of all the contested seats in local authorities.

The outcome could not have been more emphatic and convincing. We won against all odds, including under very controversial conduct and blatant partisanship by the Zimbabwe Electoral Commission (Zec).

The scale of our performance is best seen from the perspective that the surrogate party that the regime had promoted over the past two years at our expense got absolutely nothing in these by-elections. It did not win a single seat, indeed, not even a single polling station.

This is a unit that had fired our MPs and councillors, claiming the seats belonged to it. But when the by-elections came, it got nothing. The by-elections confirmed the scale of its insignificance on the political landscape.

When I said the fog would soon clear, I meant that there would be no more confusion as to the state of the opposition. No serious observer of Zimbabwean politics can legitimately say today that the opposition is divided. Such a claim would be insincere. What is true is that there was an attempt to divide the opposition, but it ended in dismal failure. The citizens refused to be divided. They had a clear choice in these by-elections between CCC and Zanu PF. They chose CCC and with that, made an emphatic political statement that clears any confusion.

However, we do not take this victory for granted. Neither will we bask in the glory of the victory and forget to draw lessons from the experience. We learned a lot from the by-elections, not least the fact that we continue to operate in an authoritarian environment. We won the by-elections not because the election was free and fair, but by sheer force of will and faith, we overcame repressive and unfair conditions.

We will continue to fight for reforms so that our elections can be free, fair and credible. The by-elections demonstrated severe weaknesses with the voters roll, which prevented many voters from exercising their right to vote as they were turned away at polling stations. We also witnessed the recurring problem of assisted voting, a facility that is abused to coerce citizens into voting against their wishes, especially in rural areas.

The regulatory authorities applied the law selectively, banning several of our rallies while allowing our competitors free passage.

The oppressor unleashed political violence which regrettably caused the death of one of our members, Mboneni Ncube, and injuries to scores of citizens.

The State broadcaster and newspapers continued with their biased approach in favour of the regime and against us. We saw the ZANU PF party candidates engaging in vote-buying, which is contrary to the electoral law.

Despite this litany of unfair and repressive measures and practices, the will of the people prevailed. This is an important signal for the future, an indication that with the best will in the world, it is possible to overcome obstacles and succeed. However, at just 35% of the eligible voters, we also learned that the voter turnout was poor, and it may have cost us in the marginal seats. It goes without saying that to defeat authoritarianism, citizens must vote in large numbers, win big and defend the vote in large numbers.

I know that by-elections traditionally draw fewer voters, but considering our circumstances, we do not have the luxury of ignoring elections. We must overcome voter apathy in 2023.

However, to be eligible to vote, citizens must register to vote. Therefore, the critical call right now is for citizens to go out and register to vote. I make this call, especially to the young people of Zimbabwe. It is your future that is at stake, but right now, it is being decided by older generations. You cannot outsource decisions regarding your future to the older generations.

I know that young people complain that they do not have national Identity cards. Please use the opportunity that will be availed by the Registrar-General’s national ID registration blitz. Voter registration itself is a continuous process, but there will be a mobile voter registration exercise in April. Please take advantage of it and make yourself eligible to vote in 2023.

I would like to thank everyone in CCC who contributed to our success. There were many foot soldiers both at home and abroad. I was particularly pleased and humbled by the great fund-raising efforts both at home and in the diaspora. To our diaspora community, you may not be here with us physically, but your contributions to the struggle are making a huge footprint on our political landscape.

I was pleased to see that we fielded polling agents at all polling centres and that communities rallied around them, providing food and comfort during those many long hours keeping an eye on the process. With committed eyes and ears on the ground, our chances are enhanced.

I know that while we performed very well in urban areas, there are concerns over the rural areas. We are going to work very hard over the next months to enhance our fortunes countrywide and our performance at the next elections. It is a myth that rural areas belong to ZANU PF.

Now that the by-elections are over and we have made our political statement, over the next few months, we will be focusing on building our party structures across the country and building robust leadership machinery that will take us through to the 2023 elections. We commend those who have been elected to carry out their mandates with the seriousness they deserve.

The citizens have corrected the democratic anomaly that was caused by the oppressors and their surrogates over the past two years. Our mantra is ‘citizens at the centre’. Citizens are first in everything, including in policymaking, law-making, and all decision-making.

As a Citizens’ Movement, the coaches of our train are many and open to everyone. There is no first-class or economy class. We have no chefs. Everyone is equal. We have space for the young and elderly, for workers, farmers, artisanal miners, and big business.

There is room for veterans of all struggles, those who fought valiantly to establish nationhood, those who defended national interests in Mozambique and those who carried out regional mandate in the Democratic Republic of Congo. They and our pensioners who serve the country with distinction should not be living in poverty. We as a Citizens Movement have a comprehensive package for them.

I said the fog would clear and now it has. However, the fact that the fog has cleared is not the end. We can now see more clearly where we want to go.

With the pretenders out of the way, we must now work hard to make sure that we deliver victory in 2023. The by-elections victory has demonstrated that even when the odds are against us, we can still prevail, and we are confident that we shall prevail.

We won these by-elections against all odds, and we will seal our victory in 2023. We win in large numbers. Let’s do it. Let’s finish it. Let’s win big. CCC is the next government of Zimbabwe.

OPINION | Zimbabwe enticing for exploration companies, but only for the few with high...

Drawn by SA’s energy crisis, France’s EDF buys half of the SA business of...