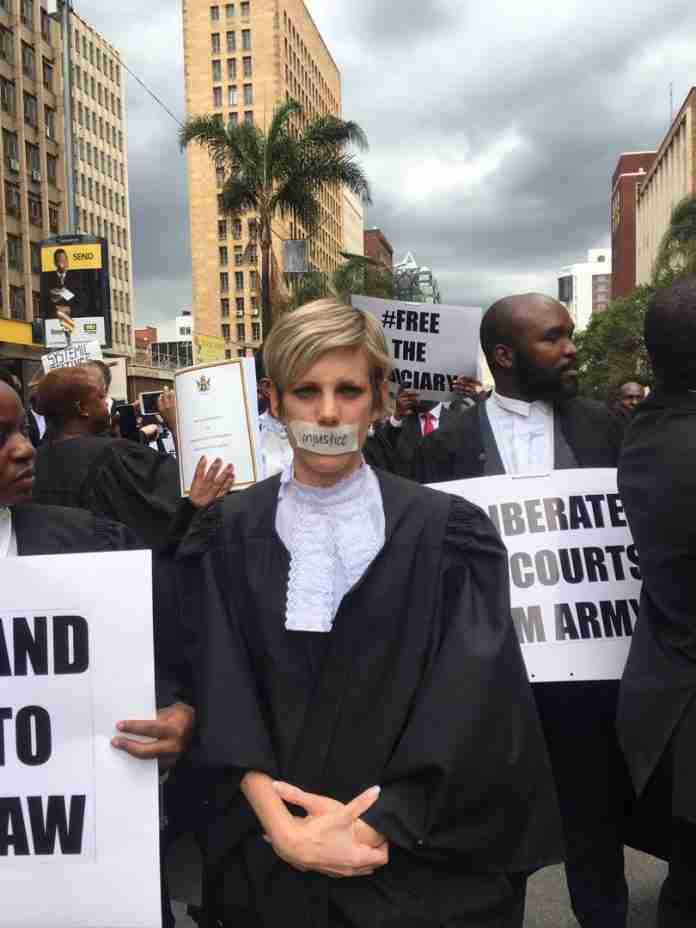 Lawyers have marched in Harare in protest at what they describe as the ‘fast tracking’ of the trials of hundreds of people arrested in recent riots. Below, we publish the petition they submitted to the Chief Justice, Luke Malaba.

PETITION TO THE CHIEF JUSTICE OF ZIMBABWE

We, the Concerned Members of the Legal Profession,

Deeply Committed to the observance of the rule of law, access to justice for all and respect for fair trial rights for all;

Dedicated to exercising our constitutionally protected freedom of expression to highlight challenges within our profession and the broader justice delivery system;

Devoted to strengthening and improving this system and public confidence in it;

Cognizant of the fact that the respect, promotion and protection of the rights of all people who appear before our courts are prerequisites to an efficient and effective administration of justice;

Aggrieved that since 14 January 2019 and its unprecedented and unfortunate series of protests and retaliatory State reaction, it has become common practice for those arrested and suspected of having participated in the 14-16 January 2019 protests who are subject to the criminal justice system to be denied their basic, fundamental rights and freedoms.

1. We note with concern that the rights of arrested and detained persons provided for in terms of section 50 of the Constitution have been violated. The following have been documented:

1.1 The continual deployment of the army to attend to issues within the distinct and exclusive province of the specially commissioned Police Service;

1.2 The use of disproportionate force by the security forces to effect arrest of unarmed civilians including use of live ammunition, beatings and nocturnal raids on private dwellings;

1.3 Dragnet arrests and prolonged mass detention including the detention of minor children in police custody;

1.5 Assault and torture of abducted persons or their close relatives, to extract information or confessions, who are then later surrendered into the custody of the police for prosecution;

1.6 The wanton arrest, abuse, rape and sexual assault of defenseless women and children by members of the security forces.

1.7 Detention of suspects at undesignated locations in contravention of the Constitution of Zimbabwe and Criminal Procedure and Evidence Act, [Chapter 9:07];

1.8 Denial of entry into police stations to members of the legal profession and or / denial of access to legal representation of some clients at some police stations upon arrest particularly at inter alia, Mabvuku, Epworth, Braeside and Makoni police stations.

2. We are also greatly concerned by the infringement of the right to a fair hearing guaranteed to all by virtue of section 69 of the Constitution and reaffirmed by The African Charter on Human and Peoples’ Rights (to which Zimbabwe is a State Party), and the African Union’s Principles and Guidelines on the Right to Fair Trial and Legal Assistance in Africa (“the Principles and Guidelines”) in that:

2.1.1 determination of complaints filed against the police, the military and other state agencies; and

2.1.2 exceptions to the preferred charges; and

2.1.4 applications for recusal of magistrates in instances when they have acted in a biased manner;

It is in the nature of justice for each case to be decided according to its merits or demerits yet we find ourselves dealing with an apparently unarticulated practice direction to treat all cases as one and to dismiss applications to the detriment of the justice-seeking public.

2.2 In addition, we are faced with inordinately expedited trials dismally falling below the elementary achievable standards of fair trial set out in section 69 of the Constitution. The ‘fast track trial’ practice predictably denies lawyers sufficient time to consult clients and prepare an adequate defence which violates accused persons’ rights in terms of section 70(1)(c) of the Constitution; and

2.3 Finally, access to medical treatment by preferred health practitioners to persons in the custody of the Zimbabwe Prison Services who are victims of police brutality or torture or other cruel, inhuman and degrading treatment is being refused.

2.4 These incidents are well documented and proof thereof is available and reposed with the Law Society of Zimbabwe by the various lawyers seized with these matters.

3. We are greatly concerned that if not acted upon, these violations will attenuate the justice delivery system and result in blanket permanent injustice where:

3.1 the right of an accused person to an effective defence and representation typified by the independence of lawyers is not guaranteed; and

3.2 Equality of arms between the parties to a criminal justice proceedings is not guaranteed; and

3.3 Adequate opportunity to prepare a case, present arguments and evidence and to challenge or respond to opposing arguments or evidence is not accorded as it should be.

4. It is the duty of the State to ensure lawyers are granted sufficient time to enable them to provide effective legal assistance to their clients. The judiciary as the arm of state assigned the role of vigilantly overseeing to the provision of justice, is enjoined to see to the effectuation of this duty. If justice is just we expect action to be taken to address these cogent concerns in a manner ad substantium so as to remedy the waning public confidence in the existence and proper functioning of the Rule of Law.

5. In view of the prevailing turmoil we require certain reassurances.

6. Therefore we collectively issue an urgent call to all organs of state for:

6.1 Full restoration of the Rule of Law;

6.2 Full compliance with all provisions of the Constitution of Zimbabwe;

7. For our part as members of the legal profession, we remain committed to the effective representation of persons in need of our services in compliance with our solemn oath and ethical obligations. Our collective belief is that it is for such a time as this and for the cause of justice that we were trained and equipped.