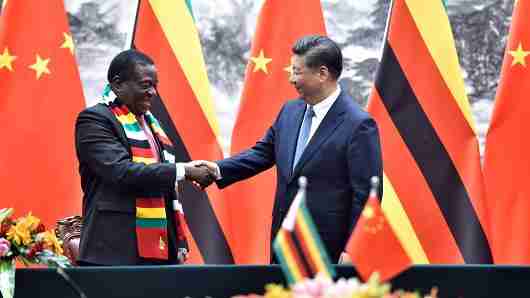 In April this year, the State-controlled Herald splashed a triumphant headline across its front page: “Chinese company to build $7bn tourism city”.

A Chinese firm, the Touchroad Group, planned to build a $7 billion tourism city in Zimbabwe, the paper said, gleefully adding that this came as “investor interest in Zimbabwe by international tourism players from the Asian economic giant grows”.

Touchroad Group chairman, He Liehui, would lead a delegation of 17 billionaires to Zimbabwe, the paper reported.

A month later, an apology came.

“On the 7th and 20th of April this year we published stories to the effect that Touchroad International Holdings Group signed deals worth billions of dollars in the tourism sector. It has come to our attention that no such deals were signed.”

What the paper had called “mega deals” were in fact just a series of Memoranda of Understanding, which are really statements of intent and nowhere near an actual commercial transaction, especially one of that size.

The face-palm incident was a show of just how badly the Zimbabwe Government has handled its dealings with China, and, just as importantly, how clumsily those have been reported by its information arms. With each new screaming headline of “mega deals”, the Government has lost credibility on its investment push.

In the rush to please, factual information on Zimbabwe’s dealings with China in recent years has been clouded by propaganda.

Here, we do a stock-take of some of the “mega deals” that have been touted over the past few years as the country’s salvation. Many of these were signed between 2014 and 2015, when Chinese leader Xi Jinping and Zimbabwe’s former president, Robert Mugabe, exchanged visits.

Many other China deals were already running at the time.

It is a mix of delay, scandals and failure – but also many successes.

In 2013, Zimbabwe signed a 20-year loan deal with China’s EximBank to expand the Kariba power plant. Zimbabwe faced a power deficit, and needed to increase output. China’s Sinohydro got the contract to add two units at Kariba, with a total of 300MW, to increase capacity to 1050MW. However, there was controversy over the $533 million that Zimbabwe paid, as it was above the $278 million that Zambia paid for its own expansion on the north side of the dam. Zambia was also getting 60MW more, for less.

However, Zimbabwean officials insisted that higher financing costs, a longer tunnel and other extra works such as the replacement and refurbishment of the old plant, installed in 1962, made the cost higher than what Zambia paid for its project.

The project was slowed down by concerns in China over Zimbabwe’s poor record of paying debts, but was completed by March 2018, when it was commissioned. Partly as a result of this, power supply in Zimbabwe has improved.

Opening the 2018 Forum on China-Africa Cooperation in Beijing on Monday, President Xi said Chinese money to Africa must not be used for “vanity projects”. But nothing screams “vanity” like Zimbabwe’s plan to spend about $45 million of Chinese money on a new 655-seater Parliament building.

The current colonial-era Parliament building can no longer accommodate the 270 lower House MPs and 80 senators, after political parties in 2013 connived to increase the numbers. With Zimbabwe’s desperate need for more useful public infrastructure, a massive new Parliament – complete with a banqueting room for honourable members – is as vain as they come.

Zimbabwe’s main Parliament chamber is modeled after Britain’s House of Commons. That’s where the similarities end. Despite her $3 trillion economy, the UK takes pride in her overcrowded Parliament, which has capacity for 437 lawmakers but somehow accommodates 650.

The new Parliament is to be built in Mount Hampden, some 20 kilometres north of Harare. Construction was initially scheduled to begin in 2016, but the grant agreement was only signed in December 2017 after a noticeable slow-down in the implementation of Sino-Zimbabwe economic cooperation in the final stages of Mugabe’s rule.

This is the biggest Chinese mega-deal yet, and overall the biggest power development project in Zimbabwe since 1980 – and appears on course. Sinohydro, with $1.5 billion funding from EximBank of China, is installing two new units at Hwange, which will each generate 300MW. This will raise Hwange’s installed capacity to 1 520MW from 920MW.

This is something Mnangagwa wears as a badge of honour. The project had been stalled for years as Beijing sulked over Zimbabwe’s bad debts. But, during his visit in April, Mnangagwa managed to revive the deal. The first installment of $200 million was finally released in June, and Mnangagwa soon commissioned the project. Sinohydro is now on site doing the work.

TelOne, the state-owned telecoms company, got a $98 million loan to expand its fibre optic network in 2015. By last year, TelOne had used $33 million of the loan amount to lay cable, starting with a project to lay 330 kilometres of fibre on the Bulawayo-Beitbridge route. Huawei and NetOne also signed a commercial contract of $500 000 for the upgrading of NetOne infrastructure.

Data was the single largest contributor to TelOne’s revenue in the first quarter of 2018, accounting for 46.2%, upstaging voice revenues, which weighed in with 44.8%, the first time this has happened since the company diversified away from its traditional fixed-line service.

Not a fly-by-night deal

The first loan deal to Mnangagwa’s government came not more than two weeks after his inauguration last year, when China announced a $153 million loan for the expansion of the RGM International Airport. The project will see construction of a new terminal, upgrading of passenger and aircraft handling facilities, as well as four new air bridges. Passenger handling capacity will increase to six million per year from the current 2.5 million and the runway will be refurbished.

The project will take three years, and there are already visible preliminary works at the site by the contractor China Jiangsu International. This is the company’s second airport project in Zimbabwe. In 2016, the company completed the $150 million upgrade of Victoria Falls International Airport, which trebled the airport’s annual passenger handling capacity to 1.5 million. A bigger runway and terminal building has doubled air traffic into the country’s prime tourist hub, as airlines such as Ethiopian Airlines send in bigger planes – Ethiopian started flying its B787 Dreamliner into Vic Falls in March – and other airlines fly there for the first time.

This has boosted hotel occupancy, with the Zimbabwe Council for Tourism, a grouping of tourism players, reporting record occupancy in the traditionally slow first quarter. Ross Kennedy, head of one of the largest operators Africa Albilda, says air traffic arrivals of tourists between January and April were 48 percent above the same period last year. The 55 weekly scheduled flights into VFA were more than double what the airport was doing last year.

The road to nowhere

In 2016, the Government announced a $2.7 billion deal for the construction of the Beitbridge-Chirundu highway. Two years later, after countless headlines declaring that work was now “underway”, and after a ground-breaking ceremony, the country’s most important road remains a narrow strip that continues to claim scores of lives.

First, the Government announced that it had awarded the contract to Geiger International, said to be an Austrian-based firm. It was really in league with a Chinese company, China Harbour Engineering Company Ltd (CHEC). It turned out that CHEC was on a World Bank blacklist, while Geiger’s own credentials were questioned from the start.

On a trip to Beijing in April, Mnangagwa surprisingly announced that he was cancelling Geiger’s deal, because they were not getting any work done. What followed was embarrassing confusion in the Mnangagwa administration, as Transport Minister Jorum Gumbo insisted the contract had not really been cancelled and that Geiger had only been given a deadline to shape up.

In the end, the truth came out; the contract was indeed cancelled and another Chinese firm, Anhui Foreign Economic Construction Group Limited (AFECC), has reportedly been handed the project. No work has been seen on the highway yet.

AFECC already has a presence in Zimbabwe, having been a major shareholder in the Anjin diamond mine. The company, which built the $98 million Defence University on the outskirts of Harare, owns the Golden Peacock hotel in Mutare and the Long Cheng mall in the capital.

A deal as cloudy as Harare water

A $144 million deal to upgrade Harare’s ageing water infrastructure and increase output from about 400 megalitres a day to 614 megalitres, was signed with China’s Export Import bank in 2011.

The loan was meant to fund the rehabilitation of equipment at Morton Jaffray and Prince Edward water treatment plants as well as the Crowborough and Firle sewer works.

The China National Machinery and Equipment Import and Export Corporation (CMEC) was picked as contractor, with the task of modernising a system last upgraded in 1994.

The project has been followed by scandal. A report by one engineer on the project alleged that CMEC was charging up to five times above market prices for its equipment. A 2014 audit revealed that council did not have a bank account for the project, with CMEC making all payments offshore, making it impossible for council to track transactions. It was also revealed that part of the loan was used to buy 26 vehicles. Ignatius Chombo, then Local Government Minister, defended the car purchases, saying the were part of the project. But among the cars were Land Rover Discovery SUVs.

Disbursements of the loan stopped after just under $70 million had been released. Council officials however have expressed hopes that Mnangagwa’s April visit would unlock the rest of the funding.

The Government announced that it was in a $2 billion deal with Tian Li, a Hong Kong subsidiary of R&F of China, for the rehabilitation of Ziscosteel.

R&F is one of the largest real estate firms in China, owning properties managed by top brands such as Hyatt Hotels. So its planned acquisition of a rusty old steel plant in Zimbabwe seemed all rather odd. In fact, Industry Minister Mike Bimha said the plant was so bad that only 15 percent of it was of any use. The timing of the deal was also questionable, given that it came just as China was shutting down its steel plants because it had too much capacity.

China could produce better quality steel, at lower cost, which begged the question why any Chinese firm would be going abroad to make more expensive steel. Tian Li were, more plausibly, after the ore from Buchwa mine, and not the plant.

To make way for the deal, Zisco’s $494 million debt was slapped on the taxpayer. Yet, there is still nothing to show. Bimha, at the time of the announcement, said the company would produce a million tonnes of steel “over the next 18 months”. Well, this was in mid-2017.

ESKOM to resume power supply to Zimbabwe, but only when SA has enough electricity