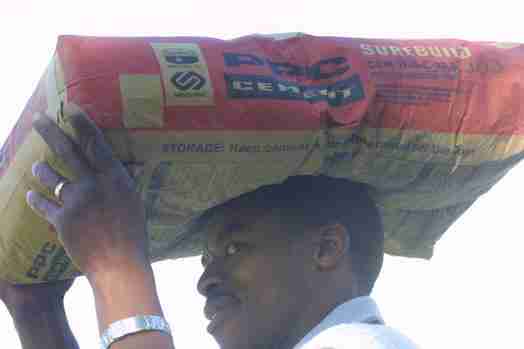 Zimbabwe is currently facing a shortage of cement, and the reason is that producers do not have the foreign currency to meet booming demand.

Forex for plant inputs
The country’s major cement makers, among them PPC, Lafarge and SinoZim, have released a joint statement on the shortages. The companies say demand for cement has risen 30 percent over the past year, but they are failing to meet this demand as they do not have enough foreign currency to attend to repairs at their plants and to import critical inputs.

“The sharp rise in demand requires that all cement manufacturers operate their plants at 100 percent capacity utilisation to satisfy the market. This is, however, not possible due to incessant plant breakdowns caused by spares shortages,” the companies said.

“Under the current economic conditions, the industry has been facing significant challenges in procuring spare parts from foreign suppliers as access to foreign currency remains difficult.

“This has, therefore, caused delays in the turnaround time for attending to breakdowns, limiting our capacity utilisation significantly. We are appealing to relevant arms of government to assist in facilitating priority allocation of foreign currency so as to expedite procurement of the required spares and equipment.”

For PPC in particular, production was hurt by a kiln breakdown at its Colleen Bawn plant in July. This has resulted in a backlog of clinker, the main ingredient. The breakdown coincided with peak cement demand. While the kiln is now back online, the company may have to import clinker to clear the big backlog. But that may not be easy, given the foreign currency crisis.

Officially, the country has a foreign currency backlog of $600 million, although many say it is much higher. The forex crunch has been the main hurdle in Zimbabwe’s efforts to attract new investment.

Why is demand for cement so high?
There are several reasons why demand has gone up. There is a rise in construction activity due to increased mortgage financing for private home builders and a rise in public infrastructure activity, such as roadworks. But a lot of the high demand is also being driven by speculative buyers loading up on cement and other construction materials to hedge against inflation.

“From our research, this increase in demand has been influenced by a number of factors which include the increase in capital for mortgage financing on the market as well as the need by many clients to lock financial value in property following lucrative maize and tobacco marketing season boosted by the command agriculture programme,” the cement companies say.

Their view confirms what other players in the industry have said. Last week, Turnall Holdings reported its biggest half-year profit since dollarisation in the first half of 2018, driven by strong volume growth and an upswing in construction activity in the country.

“The customer’s appetite to spend particularly on construction materials increased as a way of locking value,” she said.

Demand was high in the first three months of the year, a traditionally quiet period for construction, before tapering off in April and May, Chisveto added. June had, however, recorded unprecedented sales.

Masimba Holdings, the leading construction firm formerly known as Murray & Roberts, is also reporting an upturn in construction. In the four months to April, the number of projects was up and pre-tax earnings rose 150 percent. CEO Canada Malunga reported revenue up 52 percent over the same period. Masimba has a strong order book, from housing to public works, going well into 2019. It expects demand to rise in the second half, which is usually peak construction season.

In July, Johan Claassen, CEO of PPC Africa, reported that volumes from its Zimbabwe business were up 46 percent for the year. Zimbabwe operations saw revenue growing by 34 percent to R1.8 billion. Cement demand in Zimbabwe was so high that the country was the biggest contributor to PPC Africa’s revenue and EBITDA after southern Africa, which includes South Africa.

But at the PPC Africa briefing in July, group Chief Financial Officer Tryphosa Ramano had provided clues as to where all this was headed.

“Instead of people putting money into their bank account, people are building. There is a boom in terms of building,” said Ramano. PPC is working on repairing roads and expanding Zimbabwe’s airport, she added.

She expected even more demand. “The government has announced that they are bringing Chinese investment into the country, which will improve the infrastructure. They had a backlog on infrastructure.”

Brick maker Willdale, which is also struggling to meet demand, reported a 13 percent rise in sales in the first five months of 2018.

How much do cement producers import?
Sino Zimbabwe, which runs a cement plant in Gweru, sources 85 percent of its inputs locally. However, the remaining 15 percent is made up of critical spares, packaging and other consumables.

Recently, PPC had to suspend production due to a shortage of imported grinding aid, which is used in the process of reducing the hard clinker into fine cement powder.

Smaller players have recently entered the market, including Chinese company Livetouch, which recently started production at its $20 million Redcliff plant. Sino Zim is set to commission a new brick and tile plant in Gweru.

Combined, the companies have the capacity to meet annual national cement demand, estimated at 1.4 million tonnes last year. Both PPC and Lafarge are exporters. PPC exports 2 percent of its capacity into the region, supplying markets such as Botswana and Malawi.