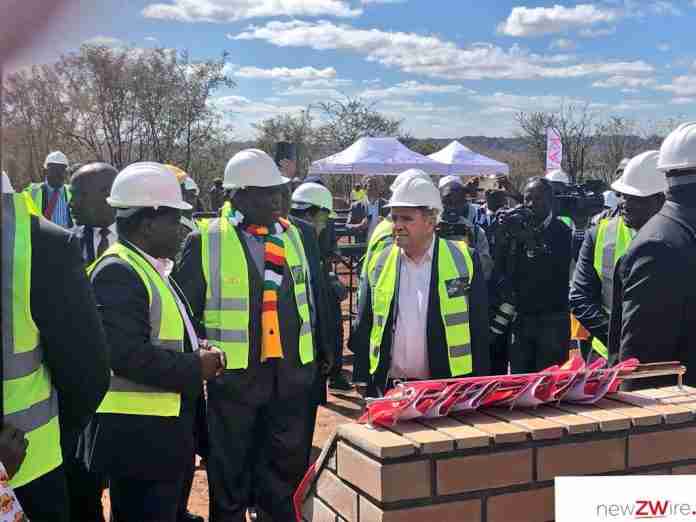 Karo Mining has launched operations at its $4.2 billion platinum project in Mhondoro-Ngezi, where President Emmerson Mnangagwa blamed a “lack of vision” in former leader Robert Mugabe’s administration for frustrating the investment for a decade.

The project, co-owned by Karo and a Zimbabwe Government investment vehicle, will see opencast and underground platinum mining at the site on the mineral-rich Great Dyke. The first open pit mine is expected in 2020 with full production coming in 2023, Karo founder Loucas Pouroulis said at a ground breaking ceremony on Tuesday.

Karo Platinum is expected to mine approximately 14.4 metric tons per annum of run of mine ore, yielding 1.4 million ounces of platinum group metals (PGMs) by 2024. This would make it “one of the global market leaders within the next five to seven years”, Pouroulis said.

Pouroulis looked visibly relieved as he stood and chatted with Mnangagwa at the drill site of the new operation. For over a decade, he had planned to invest in Zimbabwe, but he had been kept waiting by ministers under Mugabe’s Government.

“Since 2004 we have invested a significant amount of time and energy to get us to the position where we are today,” Pouroulis said.

Mnangagwa, who has painted himself as pro-business, wasted little time in reminding the gathering that it was his Government’s efforts that was finally making the investment a reality.

Earlier, Pouroulis had politely thanked the Government for its cooperation. Mnangagwa said the businessman was not telling the whole truth.

“They have been very modest stating that they had cooperation from the Government. That is not true,” Mnangagwa said.

“Mr Pouroulis first came to Zimbabwe in 2007, wanting to look into the mining sector. By 2008 or 2009, we had identified this project. But we have lost eight to 10 years before we could reach this day, as a result of many people, several people, in offices of authority, who had no vision.”

The project would have long reached full capacity had it been given permission to start mining when Pouroulis first showed interest in 2007, Mnangagwa said, adding: “It is happening now because there is a wind of change.”

Mnangagwa told Pouroulis that “the man who was stopping you from being here is not here”, adding that his new Mines Minister, Winston Chitando, was more open to foreign investment than his predecessor, close Mugabe ally Walter Chidhakwa.

“I have a new Minister. I hope he will continue to have the spirit to allow investment. When he changes his mind, he will go,” Mnangagwa joked.

Karo has high ambitions for the project. At steady state, the complex is expected to produce 1.4 million ounces of refined PGMs per annum. The refineries will have the size to treat up to two million ounces, leaving spare capacity for toll refining for other PGM producers in the country.

“The Karo project will be one of the largest investments ever made in the history of Zimbabwe and we believe that this strategic investment will open the gateway for further diversified investment and development of the Zimbabwean economy,” Pouroulis says.

On how the company plans to fund this first stage, officials said the 26.8 percent purchase of a stake in Karo Mining by Tharisa, owned by the Pouroulis family, will see an injection of $8 million for initial geological and sampling work to confirm the resource.

The talk of creating 15 000 direct jobs, and a total 75 000 in various support services, sounds overly optimistic. But Josephat Zimba, Country Manager for Karo, says the 15,000 jobs would be created over several years. “It is a standard measure of the industry that one job created in the primary industry creates another five jobs down the value chain.”

It was originally proposed that Karo would establish a thermal power plant with a capacity of 600MW. After consultations with Government, which is keen to diversify energy sources, Karo will now instead build a 300MW solar power plant.

With increased demands from Government on resource firms to invest back into communities, Karo says it plans to build a school, a hospital and other public amenities.

Consultations are underway with Local Government and community leaders to relocate families. “Nobody will be shoved by a front-end loader out of this area,” Zimba says.

These rural areas have guavas to spare, and Schweppes has a plan for them