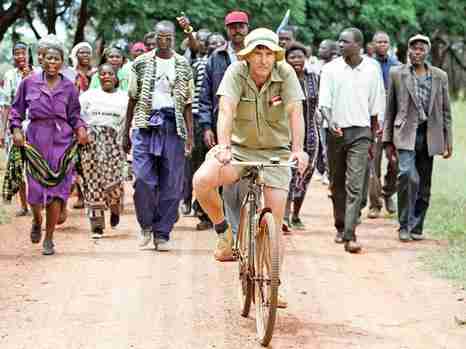 Zimbabwe has signed an agreement with white former farmers for US$3.5 billion in compensation for improvements on farms taken over for resettlement under the land reform exercise.

Here is what you need to know.

The question of whether or not farmers must be compensated – whether for land or improvements on it – has been controversial for years. Western governments have previously made it a key precondition for mending relations.

Legally, under Chapter 16 of the Constitution, white farmers are entitled to compensation for improvements on acquired land.

However, opponents of compensation say it is unnecessary, and that Zimbabwe is better off spending that money on funding land reform beneficiaries to grow output.

According to President Emmerson Mnangagwa, this step was legally necessary.

“It brings both closure and a new beginning in the history of the land discourse in Zimbabwe. The process which has brought us to this event is equally historic as it is a reaffirmation of the irreversibility of land as well as a symbol of our commitment to constitutionalism, the respect for rule of law and property rights,” Mnangagwa said at the signing ceremony on Wednesday.

Andrew Pascoe, head of the Commercial Farmers Union, described the deal as “nothing short of a miracle. I firmly believe that the way of conflict, doesn’t help any of us”. The compensation was necessary, he argues, to bring closure to an old conflict that has “had a tremendous impact on us all”.

Rather optimistically, Pascoe said: “The payment of this compensation will send a clear and unambiguous message to both the local and foreign investors that Zimbabwe is really open for business.”

Compensation for ‘improvements’, not the land

Under the country’s law, Zimbabwe does not have any obligation to compensate for land.

Zimbabwe’s Constitution, under Chapter 16 (Section 295), only allows compensation to “indigenous Zimbabweans” and those under Bilateral Investment Promotion and Protection Agreements (BIPPAs). White farmers are only “entitled to compensation from the State only for improvements that were on the land when it was acquired”.

Mnangagwa pointed this out at the event, saying “our entering into the agreement does not create any liability whatsoever”.

According to the agreement: “The draft agreement re-affirms that the Republic of Zimbabwe does not have any obligation for compensation for land and its entering into the agreement does not create any liability whatsoever in this regard.”

How much will farmers get?

Compensation has been set at US$3.5 billion. The figure was arrived at after valuations by a World Bank team, led by lands and valuations expert Maxwell Mutema. The process was funded by the European Union (EU) and the United Nations Development Programme (UNDP).

How will this money be paid?

According to the agreement, half of the money will be paid in 12 months. A quarter of the balance will be paid in each subsequent year so that full payment is made over five years.

Zimbabwe obviously does not have this kind of money. The two parties have agreed to jointly seek international support for the money. However, the taxpayer will ultimately pay, as one of the main methods of raising money will be a long term-bond. In other words, Zimbabwe will borrow money to pay the farmers.

Says the agreement: “Republic of Zimbabwe is expected to borrow by issuing a long term debt instrument of 30 years maturity in international capital markets in compliance with the country’s debt management strategy and consistent with its key debt sustainability indicators.”

Finance Minister Mthuli Ncube says he will chair a joint fund-raising committee, together with farmers, to raise the money.

“The compensation will involve raising resources both within the government, within the country, using different structures as well as globally,” Ncube says. “We will travel the world seeking to raise funding to finance the compensation needs.”

According to Ncube, this is “in a way financing agriculture, so I think it’s a win-win”.

However, the World Bank has already said it will not put money into compensating the white farmers. The Bank was only willing to fund the valuation exercise.

Who gets the money?

The agreement says “the CFU shall confirm and advise the Republic of Zimbabwe of each claimant’s entitlement out of the agreed USD3.5 billion global compensation figure.”

How did they get here? A timeline

2016 – Talks towards this deal start, under a programme sponsored by the EU and the UNDP. This leads to a working group formed on compensation. It is made up of government officials and representatives of white farmers.

March 2018 – an inter-ministerial compensation committee is set up, targeting to conclude talks on compensation by September that year.

2019 – the two sides reach a deadlock; government offers US$1.2 billion for while the farmers’ representatives want US$5.4 billion. Ncube engages independent assessors to conduct a valuation review.

The assessors recommend a figure of US$2.7 billion, subject to further talks on the value of biological assets and land clearing costs. Farmers feel these are undervalued.

13 January 2020 – VP Constantino Chiwenga chairs a meeting of the Inter-Ministerial Compensation Committee and sets US$3.2 billion for negotiations.

27 February 2020 – A joint Technical Compensation Negotiation Committee, comprising government officials and representatives of farmers is constituted. The committee is given a 31 March 2020 deadline to agree on a compensation figure.

2 April 2020 – The technical compensation committee reaches a figure in the range of US$3 – 3.5 billion.

12 June 2020 – The joint committee drafts the Global Compensation Deed and its complementary agreement on compensation for land commences.

Does this change anything with the West?

While farmer compensation – couched often as “property rights” – has always been a key demand of Western governments on reengaging with Zimbabwe, this deal is unlikely to shift their position on the country.

White House National Security Adviser Robert O’Brien names Zimbabwe among “foreign adversaries” that he says are trying to take advantage of the violence in America.
“This isn’t something that our adversaries are gonna get away with for free…”pic.twitter.com/AXRyQZiFi0

Firstly, Western governments, and the USA especially, have taken an increasingly tough position against Zimbabwe over the country’s worsening human rights violations.

On May 31, the US described Zimbabwe as “a foreign adversary”, at par with Russia, Iran and China. This saw Zimbabwe summoning the US ambassador in Harare to protest.

Relations have hit rock bottom over recent weeks, with ZANU PF calling the US ambassador Brian Nichols a “thug”. The US responded by calling the comments “deeply offensive” and summoning Zimbabwe’s ambassador in Washington to explain.

Secondly, a central demand of the United States’ Zimbabwe Democracy and Economic Recovery Act (ZIDERA) is that Zimbabwe must enforce the rulings of the SADC tribunal on land reform. The effect of these rulings is full compensation for the land, and actually giving back the farms taken over for resettlement.

Zimbabwe is also unlikely to receive any major financial bailout, as long as it still owes multilateral institutions such as the World Bank, the African Development Bank and members of the Paris Club group of lenders.

That the World Bank has turned down requests to pay compensation shows that compensating the farmers will not be an easy task for Zimbabwe.