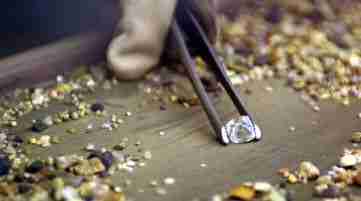 The Zimbabwe government will hold 46% of all diamond mining in the country, while local investors will own 5% of any new operations, under a new policy announced on Tuesday.

Government may also waiver its regulations to allow foreign investors to hold majority stakes in diamond firms, Cabinet said in a statement.

Under the previous indigenisation law, the government held 51% of diamond mines. After the government dropped the law, it maintained the 51/49 ownership requirements for diamonds and platinum, pending policies for each mineral.

On Tuesday, Cabinet said it had now come up with a diamond policy, under which only the state-owned Zimbabwe Consolidated Diamond Company (ZCDC), RioZim’s Murowa Diamonds and two other companies will be allowed to prospect and mine for diamonds. Companies with already exisiting diamond claims will be compelled to seek joint ventures with the approved firms.

Investors in diamond mining will be required to pick a 5% local partner. Unlike under the indigenisation law, foreign investors now get to choose their own local partners.

Government also says it can allow foreign companies to hold a majority under some conditions.

“Government may waiver that local ownership threshold subject to submission of satisfactory submissions and due diligence,” Cabinet said, without giving details.

All diamonds will be sent to a Diamond Value Management Centre, to be set up by ZCDC, for cleaning, sorting and valuation. The policy says 10% of all diamonds are to be kept for local value addition, an ambitious plan given the current absence of local polishing capacity.

Government did not name the two other diamond producers that it plans to license. But these are likely to be from China, which is still aggrieved over its companies’ eviction from the diamond fields in 2016.

Then, government declared that it would own 100% of all diamond mining in the Chiadzwa area. Zimbabwe kicked out Chinese firms from the diamond fields and brought their operations into the ZCDC.

Justifying the takeover, former President Robert Mugabe accused diamond firms of stealing $15 billion in diamond money, a figure that he later admitted to have made up.

This diamond mine takeover badly damaged relations with China, whose companies Anjin and Jinan were among those that lost their operations. Other firms that were forcibly folded into ZCDC were Mbada Diamonds, Marange Resources, Diamond Mining Company, RERA, Kusena and Gye-Nyame.

In August, London-listed Vast Resources concluded an agreement that will give it access to the Marange diamond fields in Chiadzwa. Vast is partnering Red Mercury, a local community vehicle, helping Vast comply with the 51/49 local ownership requirement for diamond investors.

Under this new policy, Vast may be required to partner ZCDC or the two unnamed firms. In September, Vast raised £863,750 through a subscription, part of which will be used for due diligence at the Marange Diamond Field.

With no safety nets, the poor are getting poorer under Zimbabwe’s austerity measures –...

OPINION – Forex crisis: how banks helped create liquidity mess, and why ZIMRA should...