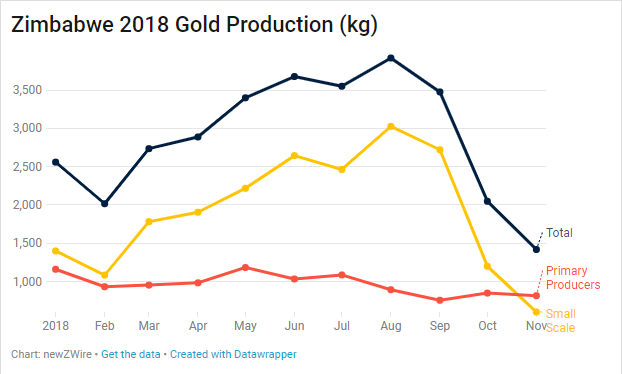 The production of gold, Zimbabwe’s top export, collapsed 59% percent September and November, mirroring a foreign currency crisis that has hit the country’s major mines and could deter new investment into the industry.

With cumulative output just shy of 32 tonnes by November, Zimbabwe has this year registered a record haul of the precious metal, exceeding the previous peak of 29 tonnes in 1999.

Gold accounted for more than 30% of Zimbabwe’s export earnings in the first three quarters of this year, underlining its importance to the forex-starved economy.

But surrender arrangements which, until last month, saw the central bank taking 70% of gold miners’ export proceeds and the remainder being paid in a weakening unofficial local currency, have hurt production.

Monthly sales to the country’s sole buyer, the central bank’s Fidelity Printers, peaked at 3.9 tonnes in August, but plummeted to 1.4 tonnes last month.

The central bank was forced to revise the surrender threshold, allowing miners to keep 55% of their forex proceeds after output declined sharply in October, but the situation is still far from satisfactory.

This is because the electronic balances which the central bank uses to pay the balance of gold miners’ earnings have gone through significant devaluation since early October.

As a result, Zimbabwean mining companies are earning lower than the international market price.

Zimbabwe’s economy is now only nominally dollarised, with the bulk of the money stock now in electronic balances that are not matched by dollar reserves. A small percentage, less than 5%, is in ‘bond notes’ introduced late 2016 in a futile bid to ease a shortage of dollar bills in the economy.

Both the electronic balances and ‘bond notes’ have declined in value on a thriving black market, slipping from 1:1.8 early October to current levels of 1:3.5.

Amid a worsening foreign currency crunch, the Reserve Bank has struggled to pay gold miners, prompting major firms to warn of imminent closure, while RioZim sued the central bank over its failure to remit gold proceeds.

Small scale producers, who account for 66% of this year’s gold output up to November, enjoy a kinder surrender threshold which allows them to keep 70% of their forex earnings. But they too have started to feel the strain and are pushing government to allow them to retain all their earnings in forex.

Gold is one of Zimbabwe’s five major exports, along with platinum, chrome, tobacco and nickel.

GUEST COLUMN | The musika COVID-19 dilemma: Closing markets will save lives, but it...