In a year in which hyperinflation raged, incomes were eroded, and the political crisis showed no sign of easing, it was hard to find anything resembling good news on the economy to sift from the bad.

But there were, beneath the surface, a few stories that gave us reason to pause and breathe.

Here are some of them.

The rise of solar

This is a case of good coming out of bad. Zimbabwe’s electricity generation cannot meet demand, while its transmission network is rundown and unreliable.

Solar is stepping into this.

From mines, manufacturers and farming estates, companies are investing in their own electricity, weaning themselves off from unreliable grid power.

According to Fitch Solutions, Zimbabwe is among the economies expected to see the fastest growth in solar over the next decade, with solar expected to double.

We run down here some of the major policy changes and investment in solar that we covered over the past year.

Caledonia’s Blanket mine: A good year

At the start of 2020, Steve Curtis, the CEO of Caledonia, the company that runs Blanket Mine, put out an update saying: “I expect 2020 to be a landmark year for our business.”

The company doubled its profits in the first quarter. Caledonia effected two dividend increases, a total increase of 24% since October 2019, a sign of its confidence in generating cash. At the half-year, production was 12.5% better than in in 2019. The third quarter saw Blanket hitting record output.

Despite the impact of COVID-19, Blanket completed its major project, the deepening of the Central Shaft, which will see output increase by 45% from 2022. Free from capex, the company went straight into acquisition mode, announcing that it was assessing two gold assets in the Midlands. Caledonia is also looking at some unidentified state gold assets.

The company’s fortunes contrasted sharply with those of other gold miners, such as RioZim, which saw drops in output and threatened to again suspend operations due to delayed payments for gold. Towards year-end, RioZim did signal that both RBZ payments and its operations had improved.

According to Caledonia’s Curtis, in one recent interview, 2021 will be a “transitional year” and the company will be in “a very different but better place.”

He was right the last time about 2020, and shareholders will be hoping he is right again.

One small step for infrastructure, one giant leap for contractors

Zimbabwe has a massive infrastructure deficit, and even President Mnangagwa admits Zimbabwe is many years behind its regional peers.

According to a 2019 AfDB’s report on Zimbabwe’s infrastructure, rehabilitating the country’s transport networks – from roads, rail to airports – will need US$27.3 billion, with the bulk of the funding required for tertiary roads. Separately, the government’s own Infrastructure Plan estimates that the country needs to spend US$2 billion per year to repair years of neglect.

Now, given how little infrastructure investment has happened, any steps – from roads to dams – is as a giant leap.

Lafarge recorded its highest sales since 2003 in July, with individual home builders, concrete and road segment driving volumes. Lafarge saw demand for cement rising 34% in Q3, compared to the previous quarter, as the economy progressively reopened after the hard COVID-19 lockdown imposed in March.

Brick maker Willdale also reported that its sales for the three months to September 30, 2020, were 49% higher than during the same period last year, also driven by individual housing developments. Volumes over the nine months of 2020 were also up 12% on the prior comparable period of 2019.

The government says it spent ZWL$31.2 billion on infrastructure in the first nine months of 2020, with ZWL$7 billion going towards roads. Of that, ZWL$5.8 billion was spent on the Harare-Beitbridge highway rehabilitation project, where 115 kilometres of the 200km target for 2020 had been completed by November 30.

Steady progress was also reported on the Harare international airport upgrade, where the terminal is 30% complete and the runway is at 80%. The Hwange thermal plant expansion project to add 600MW was 37% complete at the end of November.

Towards the end of the year, the Zimborders Consortium contracted to upgrade the Beitbridge border post announced it had successfully raised funds for the US$296 million project, paving way for construction work. 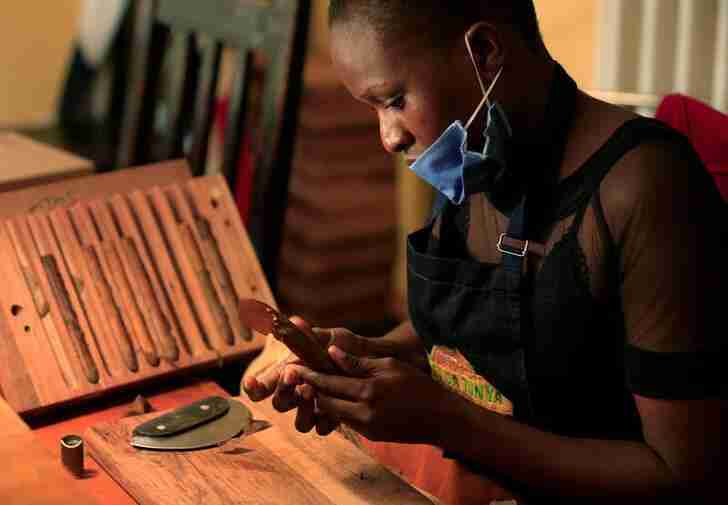 After living and working in the United States for 15 years, Shep Mafundikwa returned home in 2019 to set up Mosi-Oa-Tunya. The company makes cigars for export, aiming to take on established players while developing a culture of cigar smoking at home.

Mosi-Oa-Tunya, the local name for Victoria Falls which means “the smoke that thunders”, is the first firm to make cigars in the country.

We liked this story because “adding value” is one of those cliches that we hear at those endless breakfast meetings that business leaders and government bureaucrats love, but rarely something that we actually see in action.

Mafundikwa is shaking that table.

The case of the little big farm 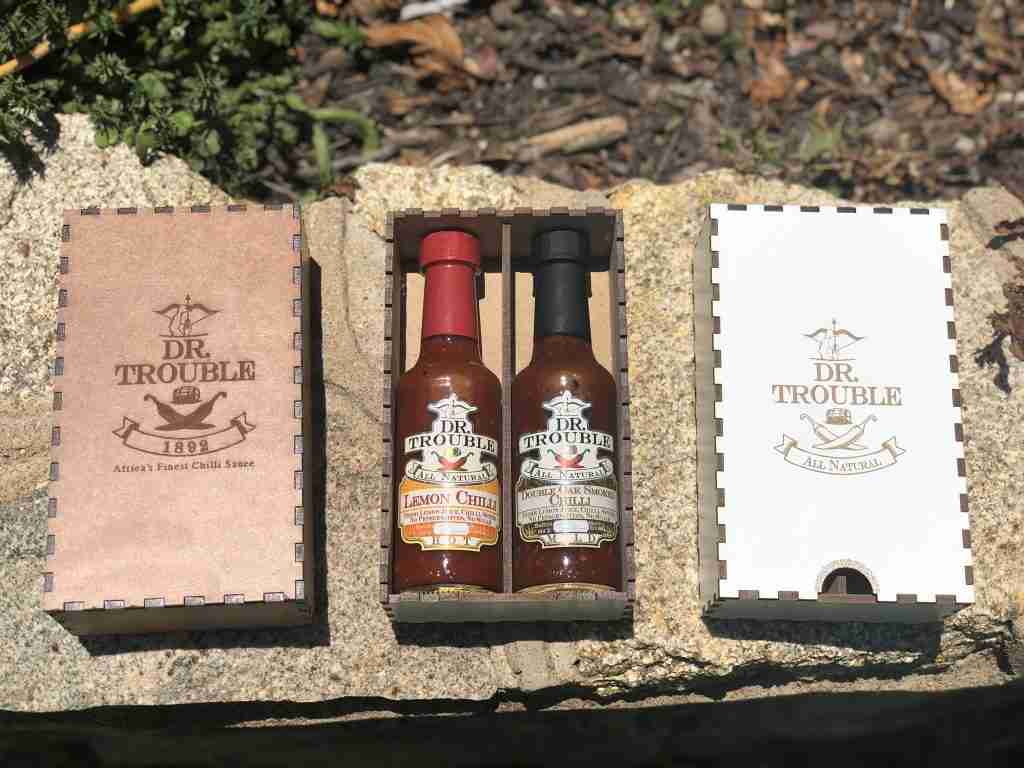 This year, we were happy to cover a few farming businesses working silently, away from the usual noise around Zimbabwean agriculture.

Nhimbe Fresh, owned by the former owner of Kondozi Estate, signed a US$15 million joint venture with the UAE’s Farmgate to produce fruits, macadamia nuts and vegetables for the UAE market. Work to increase output started in August at the 82.5ha stone fruit at Nhimbe’s Churchill farm.

The UAE facility opened the way for a fruit outgrower program for avocados, macadamia, pecan nuts, and lemons, all for the UAE markets, a plus for Mashonaland East smallholder farmers.

Nhimbe floated a US$2.9 million local bond for blueberries. It was fully subscribed.

Elsewhere, another company, Mushandi farms, was exporting blueberries from its 42 hectares at Pinfield farm near Ruwa. The company also expanded its strawberry at Home Farm in Macheke. Exports go to Woolworths in South Africa and to Europe.

Palmlife, another horticulture project at Ivanhoe Farm, Mash East, started in 2019. The farm currently produces 100 tonnes of blueberry, and says expansion will see output growing to 600 tonnes in 2021.

Then there was the story of Dr Trouble. From a small factory at Chingoma Farm near Guruve, the Zimbabwean chilli sauce maker Dr Trouble started exports to the United Kingdom.

Its neat packaging and sleek marketing show what Zimbabwean companies can do with a bit of extra spice added to their operations.

[Trouble in Guruve: How this Zimbabwean chilli maker is looking to crack UK’s US$4bn sauce market]

Not so long ago, Zimbabwe could only produce wheat that could not satisfy a month’s consumption. Planting in the 2020 winter cropping season was 45,000 hectares – well short of this year’s ambitious target of 80,000 hectares – but, the harvest is expected to be 180% up on last year’s. This will not entirely eliminate the need for imports, but it will be enough to cover the country’s needs for nine months.

In August, Seedco, the country’s largest seed producer, said it had sold 56.5% more wheat seed in the three months to June than it did over the same period in 2019, as irrigation and power supply improved. Power cuts in the last season had slashed wheat output by 62%.

By the end of November, the wheat harvest had reached 190,000 tonnes, the highest haul in the post-land reform era, according to agriculture minister Anxious Masuka. For the season, output is expected to reach 250,000 tonnes, up from 60,000 tonnes last year.