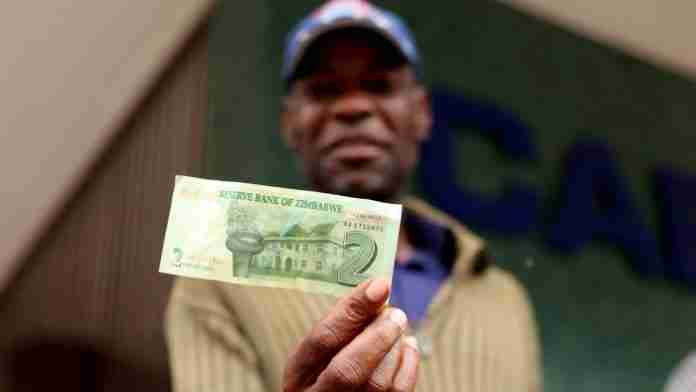 UNDERSTANDING market nuances is everything in Africa and Zimbabwe’s newest currency — the bollar — is the epitome of idiosyncrasy.

The bollar is the street name given to bond notes, the non-convertible currency introduced in November 2016, of which the equivalent of about $341 million is in circulation. It joins eight other currencies, all of them foreign, recognised as legal tender by the central bank.

One bollar is theoretically worth the same as one US dollar but, as you can imagine, it hardly trades one-to-one with the greenback, given the structural weaknesses of the Zimbabwean economy. Most Zimbabweans prefer to hold US dollars, fueling a dollar-bollar (USD/BOL) exchange rate. Under normal circumstances, a country’s currency is a real-time indicator of changes in sentiment.

If that is true, last year’s transformation of Zimbabwe’s political order should have been reflected in its currency. But in Zimbabwe’s multi-currency regime, in which US dollars account for the bulk of transactions, exchange rate movements have been largely divorced from proceedings.

Nevertheless, Zimbabwe’s recent political changes and its upcoming presidential elections are bound to have far-reaching implications for the economy and the currency. We therefore use proxies to create a framework for the bollar that helps to interpret these idiosyncratic risks.

To approximate the USD/BOL rate, we use two asset classes: equities and bitcoin (we classify bitcoin loosely as an asset class). The choice of assets was informed by the need to find instruments that are traded in Zimbabwe and overseas, providing a basis of comparison. In addition, we looked for readily tradable assets with a decent amount of liquidity, allowing for efficient price discovery. For equities, we use the shares of financial services group Old Mutual and cement maker PPC as these are dual listed on the Zimbabwe and Johannesburg stock exchanges.

For bitcoin, we use the price quoted on the Golix exchange (Zimbabwe’s most liquid cryptocurrency exchange) and the value given by Bloomberg, which is an amalgamation of prices on Bitfinex, Bitstamp, Coinbase, ItBit, bitFlyer, IND Reserve and Kraken. Our exchange rate is then derived by looking at the differential between the prices of each asset in Zimbabwe relative to their US dollar prices on other exchanges.

In the months leading up to last November’s coup, the bollar lost considerable value against the US dollar by our measures, as macroeconomic conditions became extremely tenuous.

A gap in the bollar rate as determined by the equities/bitcoin differential started to widen in the run-up to the end of the Mugabe regime, which was partly characterised by chronic shortages of cash and heightened expectations of runaway inflation. The growth in the gap is partly due to the fact that blue-chip equities in Zimbabwe are typically seen as a better inflation hedge than bitcoin, which is still in its infancy in terms of mass adoption.

On this basis, equities can be argued to offer a better reflection of the true implied exchange rate. Our two equities suggest that the bollar strengthened by 25 per cent from the time the coup began to the beginning of May this year.

The initial optimism can be ascribed to the reforms that have been achieved or committed to by the new administration:

However, over the past month the “coup-phoria” has faded and the bollar has started to lose value again as election jitters set in. Locals are essentially demanding a lot more US dollars as a hedge against a messy election outcome. My recent travels to Zimbabwe showed that the premium on liquid US dollar assets is now anywhere between 65 and 70 per cent, from as little as 15 per cent soon after the coup. This corroborates our assessment of the bollar weakening by 16 per cent since the beginning of May, using the equities approach. Recent bitcoin data from Zimbabwe are not readily available.

The equity price differential is a good barometer by which to understand in real time the economic temperature on the ground. The biggest risk on the horizon, which will have a lasting impact on the implied exchange rate, is the upcoming election. Its impact will be largely binary: if the elections are credible, FDI and portfolio flows will resume; if not, investors will remain on the sidelines.

The consensus view is that the elections will be relatively free compared with previous elections, which would prompt a knee-jerk inflow of FDI and portfolio investment — and with it, gains in the bollar’s fortunes. However, the structural rigidities in the economy such as its lack of manufacturing capacity is likely to ensure continued pressure on the currency that will be reflected in the equities implied exchange rate.

Neville Mandimika is an economist and fixed-income analyst at Rand Merchant Bank. Follow him on @nevmandimika

This article was first published in the Financial Times.

A year of African elections: The West judges Zimbabwe differently from others, and that...