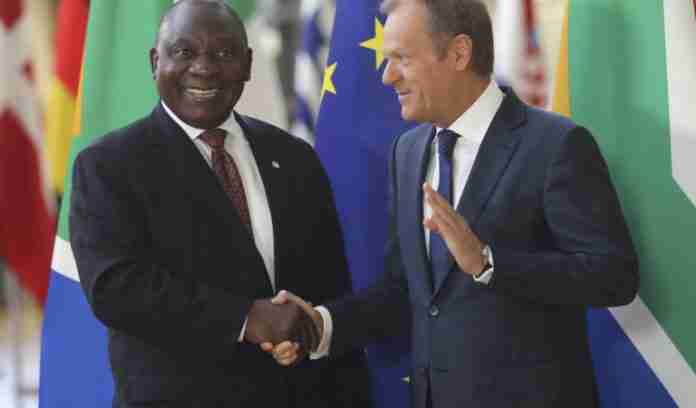 South African president Cyril Ramaphosa says Zimbabwe’s economic reforms need the support of the European Union and any remaining sanctions on the country must be lifted.

Zimbabwe was on the agenda of talks that Ramaphosa had this week in Brussels with the European Union, Ramaphosa said at a joint press conference with Jean-Claude Juncker, President of the European Commission, on Thursday.

“We discussed the matter of other countries in our region, particularly Zimbabwe, and called upon the EU to review its position on Zimbabwe, and to move towards lifting whatever sanctions they still have in Zimbabwe, because Zimbabwe is on a path of great reforms, and we insisted this should be supported as Zimbabwe has turned a wonderful corner,” Ramaphosa said.

According to the Daily Maverick news site: “Mboweni, incidentally, was relishing his return to Brussels, remarking to leaders that the last time he was there for government business, it was to plead for sanctions against the apartheid regime. This time he asked for the opposite, on behalf of Zimbabwe’s new president Emmerson Mnangagwa.”

The EU imposed sanctions on Zimbabwe after former President Robert Mugabe expelled the head of its observer mission to the 2002 election. However, the EU has rolled back the sanctions since then. Only Mugabe and his wife, Grace, remain on the travel ban, while the Zimbabwe Defence Industries is the only state entity still embargoed.

However, the EU’s position on Zimbabwe is key in helping the country secure the debt relief that it desperately needs to end a deepening economic crisis. Finance Minister Mthuli Ncube presented a debt relief plan at meetings with EU and other Western officials at World Bank and IMF meetings in Bali recently.

While relations with the EU have thawed under President Mnangagwa, an EU election observer mission to Zimbabwe, which was the first since 2002, criticised the 2018 elections as having fallen short of international standards.

In August, Ramaphosa was among the first leaders to congratulate Mnangagwa after his contested reelection, placing a call to Mnangagwa within hours of the election results being announced. Ramaphosa said at the time that South Africa stood ready to support Zimbabwe, “with particular emphasis on strengthening economic cooperation“.

TIMELINE | From a failed sale to Kuvimba takeover: all our coverage of ZMDC’s...