Lithium developer Prospect Resources says results of a definitive feasibility study into its Arcadia Lithium project in Zimbabwe confirms the mine will be profitable, with forecast life of mine revenue of US$2.93 billion and average annual EBITDA of US$106 million over a 12-year mine life.

A definitive feasibility study (DFS) is an evaluation used in mining to determine the viability of a project’s resources. The DFS is the last stage of evaluation and allows a company to go ahead with the project.

In a report released today (Monday), Prospect Resources, which is listed on the Australian Stock Exchange, said the DFS “confirms the project’s strong financial and geological merits, positioning the Company to be a leading producer of lithium & battery minerals”.

Construction and development at the mine will be completed in the third quarter of 2020, with commissioning from November 2020.

To secure a future market for its lithium, Prospect has signed an off-take arrangement with Shenzhen-listed Sinomine, who will buy 30% of Arcadia’s annual production over seven years. Sinomine, it has been previously reported, has already bought equity in Prospect for $10 million and is to pay a further $10 million in advance for Arcadia’s lithium concentrates.

With the DFS results, Prospect says it will now implement similar arrangements with other buyers.

While most focus is on its use in batteries especially, such as those used for Tesla’s electric vehicles, lithium is also used for  glass and ceramics and a range of other products. 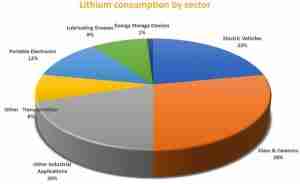 Prospect Resources Managing Director Sam Hosack said: “This DFS represents a significant milestone for Prospect as we transition into development. We are excited by the opportunity to capitalise on the strong fundamentals of the lithium market, initially through the production of lithium concentrates. Based on the mine economics and financial strength of the project, we are moving swiftly to finance, develop and commence production at Arcadia.”

Arcadia is located at Arcturus, nearly 40km east of Harare.

The company has also initiated pre-feasibility works to test the viability of a lithium chemicals plant on site, in order to upgrade our product and capture additional value from the lithium supply chain. The company has, separately, set up a pilot lithium lab near Kwekwe.

The Government has awarded Arcadia national project status, which exempts the project from import duties and VAT on imported capital goods to be used on the project. Prospect has also applied for Special Economic Zone (SEZ) status, which would grant it a range of tax concessions.

Drilling down to the numbers
According to its DFS, Prospect expects pre-tax net present value (NPV) of US$511 million with strong margins, delivering a rapid payback for the project of 2.5 years from first production, and “an exceptionally strong” internal rate of return (IRR) of 44%.
Broadly, NPV and IRR are measures used in such capital budgeting to evaluate the profitability of an investment.

Zimbabwe has been pushing lithium as major draw for foreign investment into its resources, which remain largely undeveloped due to years of economic decline. While the repeal of the indigenisation law has increased investor interest – Prospect and gold producer Caledonia have increased their shareholdings in Zimbabwean assets as a result – forex shortages and policy volatility continue to keep large scale investment at bay.