Even in a normal year, the scene I find inside a luxury car garage in central London would be unusual. It’s here in Marylebone, on a murky November morning, that I find a young Zimbabwean aviation and sex toy tycoon who has devoted his life to fulfilling a boyhood dream: building his own hypercar.

Ameerh Naran, who is 34, stands next to a full-size model of the Naran, a 1,048 brake-horse-power “hyper-coupé” currently in production in Germany.

He’s making 48 of the four-seater cars initially and offering buyers the chance to customise pretty much everything. Prices start at US$1.1 million, but Naran expects most builds will exceed US$1.3m. 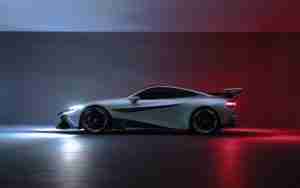 It is a mad, muscular looking beast, with a shark-like nose, gold-leaf trim, and giant spoilers. The boxy exhaust housings look like a pharaoh’s cat flaps. It dwarfs the Lamborghini parked next to it – and Naran himself, who presents rather more elegantly in a navy Celine blazer with immaculately pressed mustard trousers and patent Ferragamo loafers.

“We’ve got a client who’s big into horses and we’re working out a way to do the interior using horse hair,” Naran says of the cars, the design for which he is revealing today (it won’t smell of a horse, he assures me). “We have another client who has a tattoo on his body that we’re embroidering into the car.”

A tattoo of what?

“He’s honestly very high-profile, if I said you would know who he is.”

Such is life in the rarefied world of the limited-run hypercar, in which lowly supercars – your off-the-shelf Ferraris and Lamborghinis – become the antelopes to the hypercar’s apex predator.

It’s a trend that arguably started in 1993 with the McLaren F1. Other exotic species have included the Bugatti Veyron and the Swedish marque Koenigsegg. Some come and flame out, while others become highly collectible; the F1 cost about £1.2m in today’s money at its launch. Last year, one sold for £16.2m. 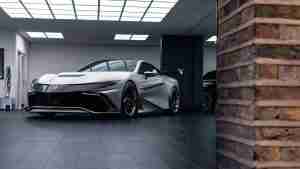 If 2020 seems like a perverse year to launch a US$1m car, well, the supercar market has rallied. The very wealthy still have money to burn, and a desire to invest in collectibles. Ferrari’s share price, meanwhile, has exceeded its pre-pandemic high.

Ameerh says his customers come from sport, music, and big business. All of them have already expensively stocked garages. They are the spenders for whom a million pounds on a shiny new toy isn’t such a stretch.

Not that anything 2020 has thrown Naran’s way would have diverted him from a journey he says he began 30 years ago. While exotic car fantasies are hardly rare in children, Ameerh’s entrepreneurial background – he descends from Indian immigrants who built a small shoe manufacturing empire (Conte Shoes) in Zimbabwe – gave him different ideas. Just getting behind the wheel wasn’t going to cut it.

“I was four when I decided my purpose in life was to build my own supercar company,” he says, solemnly. Everything since has been in service to that dream – and amassing the huge pile of cash (an undisclosed amount) required to make it real.

At school in Harare, Naran sold tadpoles to his classmates and later began importing Tamagotchi virtual pets. As a teenager, he wrote to Ian Callum, the renowned Aston Martin and Jaguar designer, and Adrian van Hooydonk, head of design at BMW. “And they both wrote back to this 14-year-old boy in Zimbabwe,” Naran says, still beaming at the memory.

On their advice, Naran left Harare to study industrial design at Brighton University and then automotive design at Coventry. He also got into car racing, and at one point thought his fortune might lie in Formula 1. But it soon became clear he wasn’t going to rival Lewis Hamilton, and he was eventually priced out of the sport’s higher ranks.

Naran was 23 when he talked his way into gaining exclusive operating rights across Africa for an American private jet firm. When that company failed, he launched his own brokerage, Vimana Private Jets, where he says many of his top clients have $1m monthly budgets for family travel.

[CLICK: ‘Mnangagwa is a loyal client’ – If you need to dodge an assassin, this 32-year old can arrange the getaway jet]

Vimana is now funding Naran Automotive, as well as providing a pretty handy mailing list; the majority of Ameerh’s car customers are his jet clients.

There have been entrepreneurial side roads. When Naran tried to bring the Victoria’s Secret brand to Zimbabwe, he spied an easier opportunity in importing vibrators.

Sex toys were illegal at the time and Naran spent three years lobbying the conservative Christian government to change the law. He says his Good Virbations brand still has a sex toy monopoly there.

“We don’t make huge amounts from it but it pays for the stores and the staff, which is important to me,” he says.

Naran, who had returned to Harare to run his jet business, settled in London three years ago to pursue his automotive dream. He lives in Waterloo and drives a hulking Brabus 4X4 with personalised plates, perhaps the least appropriate run-around in the capital. (His weekend car is a Lamborghini Aventador SVJ, a snip at around £350,000).

He brought in a crack team to help him realise his dream. Steve Pegg, his chief operating officer, is a veteran engineer from Aston Martin, Landrover, and a series of electric car startups. Jowyn Wong, formerly of McLaren and now a specialist in niche hypercars, leads the design team, while Kate Montgomery, a freelance materials consultant, is in charge of the bespoke interiors.

“It’s not every day that you get the opportunity to take the aspirations of one man and build that in front of his eyes,” says Pegg, who has joined Naran at the garage. 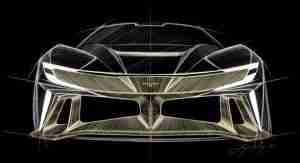 Naran is proud of his home country and has incorporated a fish eagle – Zimbabwe’s national symbol – into the Naran Automotive logo.

“Zimbabwe afforded me an incredible upbringing and I do what I can to give back,” he say, pointing out that his jet operations staff are all employed in Harare.

The startlingly realistic reference model itself, handmade in foam and real car parts and finished with a gold leaf trim at a specialised workshop in the Midlands, cost Naran well over £100,000 to produce. 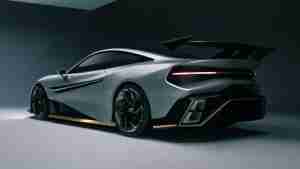 It lands in London just days after the UK government announces a ban on new petrol cars from 2030. But Naran is unapologetic about his car’s obvious carbon inefficiencies.

“There are people who buy cars with their brain and people who buy with their heart,” he says. “We’re trying to appeal to the latter.” Anyway, he believes, the cars of the future will run on hydrogen not electricity.

Naran still has a decade to watch his petrol-fuelled dream come to life. He whips out a folding Samsung phone to show me the designs for his own Naran.

It’s pure Fast & Furious, with a matte dark-green finish, a purple nose and dashes of fluorescent greens and yellows. Does the image match his childhood fantasy? “I’ve never thought of it like that but, you know, it really does materialise what I dreamed about as a four-year-old in Zimbabwe,” he says.

OPINION | I will remember Robert Mugabe with pride, but with anger | Teresa...