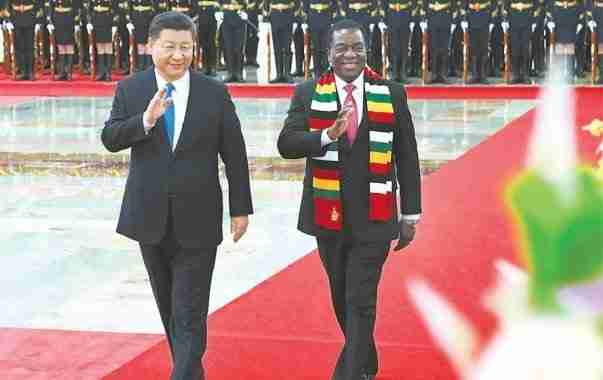 AMID growing controversy over the impact of Chinese loans on African countries, President Emmerson Mnangagwa says there is no risk of Zimbabwe having to surrender assets to its Asian ally, as Chinese loans have been used to fund projects that “pay for themselves”.

Earlier this month, China announced $60 billion in new credit to African countries, which will be used mostly for infrastructure projects under the Chinese belt-and-road initiative. African governments, desperate to bridge the gap in public infrastructure, welcomed the money, but critics have said China is deliberately leading African economies into a debt-trap so it can grab their resources and influence policy across the Continent.

Social media reports that Zambia is to give up its power station and an airport still under construction to China have been proven as fake, but this has not ended talk of a Chinese “takeover” of Africa.

At a meeting with Zimbabweans in New York, Mnangagwa was asked whether Zimbabwe was not in danger of losing assets to China. Mnangagwa said the infrastructure deals were structured in a way that Zimbabwe would not have to tap into Treasury to pay back loans, mostly from China EximBank.

“During the period of isolation, very few countries outside the West assisted us. Some of the notable countries which came to our assistance were China, India, Brazil, Russia and Malaysia. When things are good, you don’t then forget your friends who stood with you during bad times. But you don’t sell your country because somebody stood with you during bad times,” Mnangagwa said.

The most recent of Zimbabwe’s much-hyped “mega deals” with China includes a $1.2 billion deal for the expansion of Hwange power station with the addition of two units, which will add 600MW to the grid.

“The 600MW we will generate in the next 18-24 months will go into the national grid and pay for itself. Nothing will come from Finance. So I don’t see any danger where you have a project which becomes productive in terms of revenue streams to pay for itself,” Mnangagwa insists.

Another power deal saw Zimbabwe getting a $533 million 20-year loan from China to fund expansion of the Kariba South plant, which has delivered an extra 300MW.

“We have the asset (Kariba South) in Zimbabwe, and even when we finish paying the loan, the asset remains with us. So I don’t see the danger there,” said Mnangagwa.

Zimbabwe’s Government has been criticised for not disclosing enough details about the terms of the loans it has secured from China. Zimbabwe’s Constitution gives Parliament the power to examine such loans, but there has been little close scrutiny of loan deals by Members of Parliament.

In 2011, Parliament ratified a controversial $98 million Chinese loan to Zimbabwe to build a defence college, funded partly by Zimbabwe’s share of diamond revenues from a joint venture with Chinese miners. Tendai Biti, then Finance Minister, said at the time that he was opposed to the deal but had signed it anyway because he “didn’t want to create a diplomatic furore”.

After some protests, opposition MPs ratified the deal, with the then legal committee chairman Shepherd Mushonga saying they had okayed the deal because there were Chinese military leaders in the Parliament gallery and, had the MPs rejected the loan, “it was going to be a very embarrassing scenario”.

Other Chinese loans ratified by Parliament include the 2012 $150 million loan agreement for the Victoria Falls airport expansion, which has since been completed. Also in 2012, Parliament authorised the $140 million credit for the rehabilitation of Harare’s water and sewage treatment works. The project has stalled due to Zimbabwe defaulting on the loan.

The loan for the Hwange rehabilitation was ratified in 2016. The project was delayed over Chinese concerns over repayments, but the impasse was broken when Mnangagwa visited China in April this year.

In May, Parliament ratified the $153 million loan from China Eximbank to expand the Robert Gabriel Mugabe International Airport. The motion to ratify the loan showed that it was a concessional loan with a seven-year grace period, an annual two percent interest rate, 0.25 percent commission fees and management fees pegged at the same rate.

The loan also has a tenure of 20 years, which includes the seven-year grace period. Repayment will be from fees raised from air infrastructure development fund and air passengers’ services charges. These will be ring-fenced into an escrow account jointly monitored by the Government of Zimbabwe and China Eximbank.

Change your ways or sanctions remain, US tells Zim