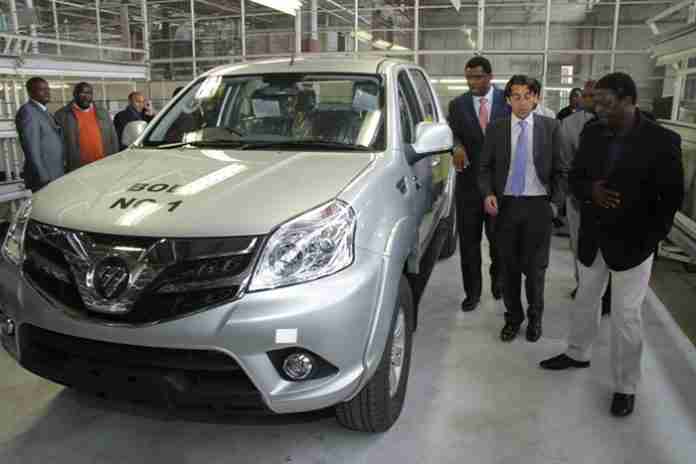 Earlier this year, Mike Bimha, then Industry Minister, launched the Zimbabwe Motor Industry Development Policy, meant to revive the country’s collapsed local car manufacturers. After the event, he skipped into his imported Mercedes Benz and left, with his irony-gauge obviously reading zero.

Zimbabwean politicians are obsessed with cars. Not just any cars, but big imported cars. And each year, this greed for big expensive cars costs the Zimbabwean taxpayer hundreds of millions of US dollars, and it is costing us thousands of jobs.

On the day new Members of Parliament were sworn in early in September, car dealers, among them Zimoco and Croco Motors, pitched tents in the Parliament car park, displaying shiny new wheels. They may be polarised politically, but nothing unites opposing MPs like the glimmer of a new car. The scent of fresh leather car interior is hypnotic; one sniff and MPs promptly forget all their “servant of the people” campaign rhetoric. Together, MPs milled around the cars, amid much excited hand-rubbing.

“We don’t know what sort of cars we will be given yet, but we saw the companies advertising…some even spoke to us, encouraging us to take certain brands,” Mabvuku MP James Chidhakwa, a Parliament freshman, was quoted as saying.

Finance Minister Mthuli Ncube says he is suspending the purchase of new cars for Ministers and MPs, so that money can be diverted to the cholera crisis. Zimbabweans will be hoping this is the start of new and permanent austerity on cars. But can Ncube make it permanent? Spending on big cars is a long-cherished Government tradition, which not even an insider like Patrick Chinamasa could stop.

Free ride?
Are MPs’ cars free? At the start of the last Parliament term, MPs got a $35 000 car loan. The Government actually buys the cars on the MPs’ behalf, and pays for them by deducting payments from each MP’s allowance. This year, Treasury data shows that Government is appropriating $10.5 million for the car scheme.

In his budget statement last December, former Finance Minister Patrick Chinamasa showed a glimpse into what the cars cost. In total, there were requests for cars worth almost $170 million.

“Treasury is in receipt of requests for procurement of utility and condition of service vehicles amounting to US$169 million broken down as follows; Parliamentary vehicles, US$21 million; Chiefs’ vehicles, US$14 million; Independent Commissions, US$9 million; Civil service members, including Ministers, US$93 million; and Utility Vehicles, US$32 million,” Chinamasa said.

At the time, he said he was “unable to provide for the above vehicle requests”. He soon made a U-turn.

Under pressure from constituents, MPs and their supporters often insist that the cars are not for free. They claim that they pay for them. But, in the current budget, the cost is all on the taxpayer. While MPs did get cars on loan at the start of their term, they simply did not pay for them because Government was not paying their allowances and the car insurance. At one point, MPs actually went on “strike” to demand outstanding allowances.

So, Chinamasa, besieged by MPs, made a concession earlier this year. The cars would now be for free. MPs would no longer have to pay anything. Importantly, he said he wanted the “free car” scheme to remain into this current Parliament, which began sitting this September.

“With respect to the welfare of MPs, I have committed myself and I want to repeat that when we started the Parliamentary Car Scheme, it was on a loan basis. I have since converted it to be a free car scheme, you will not be required to pay for that car. I would like to carry that scheme to the next Parliament. We want to assure each Member of Parliament a free car,” Chinamasa told the MPs, who obviously cheered wildly.

It gets even better for them. While urban MPs can change their cars after five years, rural MPs complained that their roads are so bad that cars barely last two years. So they wanted cars – and obviously not the roads – to be replaced quicker. Chinamasa found a compromise; MPs would be able to import cars duty free.

“For that, the only consideration is that we can allow a duty-free certificate for Members of Parliament to buy for themselves but that will be done in the third year of MPs life of Parliament. We agreed that those who suffer damage through accidents will be allowed free duty to replace the car that they had bought,” he said.

He then sympathised with the MPs for the misery they supposedly suffer. “I do know as a Member of Parliament myself what it means to run a constituency, especially with respect to motor vehicles. A motor vehicle is the key issue and given the state of our roads, generally, their durability does not take us very far. So, it is a matter that I understand and I will do so clearly before Parliament dissolves.”

So, MPs did in effect get cars for free, contrary to what many of them now claim.

The cost
In Government, senior officials get to switch to new cars every five years. Cars are licenced, insured and serviced at the taxpayers’ expense. As at December, according to Ministry of Finance, the total outstanding request for Condition of Service vehicles within the civil service was $140 million.
Permanent Secretaries, commissioners and those in equivalent grades are entitled to one personal issue vehicle. Principal Directors, Directors and Deputy Directors and their equivalents are on a vehicle loan scheme. The budget for Condition of Service vehicle requests for Commissioners alone stood at $10 million last year.

Some within Government hired cars for $8 000 per month, translating to an annual cost that is enough to buy a high-end car.

Buying local
By importing most of its cars – for chiefs, MPs and Ministers – the Government is actually breaking its own rules.

There is a standing executive order, Cabinet Circular number 16 of 2011, which requires that Government buys 80 percent of its cars from local car assemblers. It reinforced a 2002 Presidential Order to Government for local car procurement. This has never been complied with.

Instead, while the Government has enriched middlemen – some of them are linked to senior officials – local car assembly plants have wide open capacity that they don’t know what to do with. They have had to cut jobs.

While top chefs import high end cars, ordinary Zimbabweans also import second-hand cars from Asia. In total, Zimbabweans spend just short of US$500 million on car imports every year. That means US$5 billion in scarce foreign currency has been spent on car imports over the past decade, according to data from Zimstats. Every day, some 200 used cars are processed through Beitbridge, according to Zimra. Between January and August this year, 45 368 cars were imported via South Africa. That’s up from 26 781 over the same period in 2017.

For ordinary Zimbabweans, grey imports are cheaper. With virtually no car finance, which drives new vehicle sales in many other markets, few can afford to buy a Willowvale car. But for top politicians, locally assembled cars are simply not good enough for them.

Greedy officials insist that the top spec imported cars that they demand are part of their contracts, which ludicrously specify what brand of car a Minister should get.

This is what a Minister’s “condition of service” looks like in terms of cars; a Minister is entitled to a Mercedes Benz E-Class sedan petrol or an E350 diesel. They also have a right to an SUV, specifically a Range Rover or Landcruiser V8. That’s not all. Each Ministry also gets a Jeep Grand Cherokee, plus another double cab 4X4, for use by Ministry officials.

Conditions of service aren’t too shabby either for Deputy Ministers. Each gets to pick from either a Jeep Grand Cherokee, Toyota Prado or Land Rover Discovery for their personal use. An extra 4X4 is thrown in for their office’s use.

A Minister who is also an MP, can therefore have their Ministry allocations of cars and still get another car from Parliament. Ministers keep their cars after five years. At the end of the unity Government in 2013, delighted Ministers from both ZANU-PF and the opposition received letters from Cabinet Secretary Misheck Sibanda telling them they could buy their Government-issued cars at a discount. It was reported at the time that some Ministers could barely believe their good fortune as they drove their SUVs home for as little as $1300.

Minister’s contracts do entitle them to high-end vehicles, but Willowvale Motor Industries has the capacity to assemble vehicles that are luxurious enough not to cause any damage to our fragile public servants.

While Ministers might think they would die from withdrawal symptoms if they wean themselves off their Benz-Prado-Range Rover obsession, they would actually survive in the Mitsubishi Pajero Sport, which Quest Motors now assembles at its Mutare Plant. Government directors would surely live if they drove the Foton Tunland, with its 2.8 litre Cummins engine, or a top spec BT50 from Willowvale.

In 2017, Willowvale launched a new line to assemble BAIC trucks at its largely idle Harare plant. Our Chiefs wouldn’t look out of place in a BAIC Grand Tiger, yet the assembly plant still has spare capacity as the traditional leaders are plied with imported pick-up trucks.

This goes for agriculture as well. Quest Motors has capacity to assemble 23 000 tractors annually, but they only sold about 10 tractors in one year while Government imported tractors via a network of well-connected middlemen.

At its peak, Quest used to employ 6 000 workers. Today, they employ just a hundred.

At Willowvale, 18 000 vehicles rolled off the assembly line in 1997. By 2012, only 4 000 units were assembled. Last year, according to Willowvale, just 400 cars were assembled. The company had expected to raise this to 940 this year, after commissioning the BAIC line. But even this low target looks likely to be missed.

Zimbabwe is desperate for a working bus service. The market, according to experts in the field, can absorb 300 new buses each year. Quest alone has capacity to assemble 3000 buses per year. The assembly lines at AVM Africa and Deven Engineering could also match that demand.

The Industrial Development Corporation, the state-owned parent of Deven, once put the assembly plant on sale. IDC later decided against this and signed a deal with Yutong to assemble buses at its plant.

A 2016 study by the Transport and Infrastructure Parliamentary Portfolio Committee found that if Government alone bought cars and buses from local car assemblers, productivity there would increase by 10 percent. Instead, car assembly plants are lying idle.

Meanwhile, Ministers and chiefs still pick foreign-assembled SUVs, and at Parliament, MPs are rubbing their hands in anticipation of their own brand new imported wheels.
The people’s representatives cannot be seen in a Cherry from Quest, even if it means saving foreign currency, and jobs.