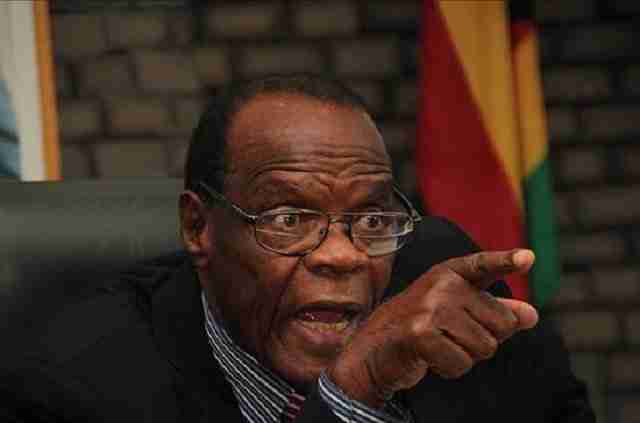 REGISTRAR-GENERAL Tobaiwa Mudede was at his arrogant worst at a testy July press conference in the run-up to the 2013 elections.
Why wasn’t he releasing the electronic version of the voters’ roll, frustrated journalists wanted to know.
After deflecting for innumerable times, Mudede went into an incoherent monologue about how little time his department had been given to produce the voters’ roll.
But you say you have a printed version, surely you printed from an electronic source, why not release THAT?, a reporter wanted to know.
Mudede ducked and dived and, in the end, failed to justify his inexplicable failure to comply with a key electoral requirement.
After being compelled by a court order, Mudede only released the roll on the day of the election, dramatically delivering it in large reams of paper on the back of a truck.

FACE OF ELECTORAL FRAUD
Mudede’s exit from government, 11 years after he reached retirement age, was announced late on Wednesday and drew arguably the biggest cheer of all the changes President Emmerson Mnangagwa made to senior levels of his administration.
It is not hard to see why.
To the opposition, Mudede who ran the country’s elections in 2000 and 2002 as the Movement for Democratic Change loosened ZANU-PF’s stranglehold on power, became the face of poll rigging.
There was even an unflattering song composed for him.
As the custodian of the country’s civil registrations, Mudede was also the target of several lawsuits by single parents, mostly women, after his department refused to issue birth certificates for their children.
One of his last acts in office was to defend a lawsuit lodged by journalist Violet Gonda, who says she was denied a passport because her name is on some ‘stop list’ that Mudede’s department allegedly drew up for ‘regime opponents.’
Ordered by the court to issue Gonda with a passport, Mudede refused to apologise. “I don’t apologise, Lady. I don’t,” he told her. Instead, he would hunt down the official – he described the official as a “worm” – who unwittingly blew the lid on the existence of the blacklist.

ROCK-OIL SALESMAN
But Mudede’s election infamy is almost matched by his role in what must rank as one of the ZANU-PF government’s lowest points — the Chinhoyi ‘diesel’ scandal.
In 2007, a self-proclaimed spirit medium, Rotina Mavhunga, led former President Robert Mugabe and his Cabinet up the garden path with the ridiculous claim that diesel was oozing from rocks near the Chinhoyi caves.
Although Mugabe later tried to place himself above this incident, ridiculing his top officials, among them senior ministers Didymus Mutasa, Sydney Sekeramayi and Kembo Mohadi for showing up, barefoot, at Mavhunga’s ‘diesel shrine’, he had actually put together a Cabinet committee to explore the ‘oil find.’

Mudede’s central role in the Chinhoyi ‘diesel’ scam came to light during Mavhunga’s trial. The senior civil servant had not only introduced her to Mugabe, he had subsequently harboured her as the police hunted for her.
Magistrate Ignatius Mugova raked Mudede over the coals for his role in the diesel debacle.
“From the evidence of Rotina Mavhunga, it is abundantly clear that Tobaiwa Mudede had an interest in the matter, whether it was for the benefit of the nation, or for himself, it’s unknown to the court,” Mugova said while sentencing Mavhunga to 39 months in jail.
“Further, the court noted something disturbing about his behaviour. As the police sought Rotina Mavhunga, Tobaiwa Mudede kept her in hiding and fed her.”
Earlier, the court had heard that Mudede had supplied the diesel which Mavhunga had used to trick the senior government officials. Mudede had also convinced Mugabe to pay Mavhunga two head of cattle, large sums of money, a farm, and even three buffalo.

KwaMudede: The forbidden place
That the Registrar-General’s office is known as “KwaMudede” is both a sign of the power he wielded, and a signal of how long he had stayed in office.
Makombe Building, the R-G’s Harare office, in many ways, reflects Mudede himself; old fashioned and grim. Few things make a Zimbabwean as prayerful as the prospect of having to go “KwaMudede”. There, they are led through a maze of dimly lit corridors and forced to hop from one rubber-stamping bureaucrat to the next, just to get passports, birth certificates and IDs. Despite some recent improvement, Makombe building still fills many with dread.

Mudede never made it easy to get ID documents. In fact, one UNICEF reported that 67 percent of rural children under the age of five had no birth certificates. In response, Mudede arrogantly said the UN agency was just trying to “justify the donor funding they received”.
He also denied many Zimbabweans their right to citizenship. Under his regime, many Zimbabweans were forced to queue at foreign embassies to renounce claims to citizenship of countries that many of them had never set foot in. If a parent was born outside the country, one had to get a letter from that country declaring that you were not one of theirs. Many faced the heartbreak of having to let go of their Zimbabwean citizenship.
The 2013 Constitution allowed dual citizenship, but still Mudede remained defiant. Even after businessman Mutumwa Mawere won a court case against him, setting a legal precedent, Mudede simply refused to comply. “As the Ministry of Home Affairs, we have decided that we are not going for realignment (of the Citizenship Act to the Constitution), but for amendment,” he said.
He has been taken to court multiple times, losing repeatedly. His views on citizenship, and on allowing mothers or fathers to register births in the absence of one spouse, were always less about the Constitution than they were about his patriarchal and personal conservative beliefs.

RELIC OF THE PAST
A traditionalist and firm believer in ancestral worship, Mudede is considered an elder member of the Hwata clan, from which the perhaps the most famous of the Mbuya Nehanda mediums, Charwe, originated.
To some critics, he owed his long stay in government, way beyond retirement age, to this connection.
This was, after all, a government with a mystical streak.
After Mugabe was swept out of power in a palace coup last November, expectations were that a coterie of his enforcers like Mudede, who had had an arthritic grip on government for decades, would go with him.
Hopes were raised when former Finance Minister Patrick Chinamasa announced in December that government would send all civil servants above retirement age home.
But these hopes were dashed when, days later, then Public Service Minister Petronella Kagonye told Parliament that Mudede was on a contract which government was renewing annually. She also cited an African Union protocol which seeks to eliminate “discrimination against older persons with regard to employment opportunities.”
Appearing before a Parliament committee earlier in 2018, MPs asked Mudede to reveal his age. He refused. “It is a highly personalised question,” he angrily retorted.
Mudede’s continued stay in a key government office did cost Mnangagwa and his ‘new dispensation’ some political capital as nothing screamed ‘old order’ louder than the Registrar-General.

Away from office, Mudede’s other interest – apart from hunting and boxing – was genetically modified organisms and reproductive politics. With his friend and co-conspirator Richard Hondo, Mudede penned a book: “Genetically Modified Organisms and Population Control Drugs in Developing Countries.”
Contraceptives are nothing but a conspiracy by the West to check population growth in Africa and the developing world, to ensure continued underdevelopment, they argued in the book.
In one radio interview, Mudede declared: “Contraceptives interfere with God’s biological plan for women. They are a ploy by powerful nations to weaken Africa.”
The Ministry of Health had to issue a statement, dismissing his statements as “totally false”.
Dabbling with reproductive politics did nothing to improve Mudede’s standing with women’s rights activists.
His penchant to overstay, or stay long, was also evident in his other favourite pursuit. With his close friend Hondo, Mudede controlled the Zimbabwe National Boxing and Wrestling Control Board for more than 33 years.

But, as Mudede showed, boxers who stay too long often suffer serious damage.