EACH time Tendai Biti gets up to address an MDC Alliance rally, he is greeted with ‘USA! USA!’ chants. This adulation is not for America, but its coveted currency.

Biti, Zimbabwe’s finance minister between February 2009 and June 2013, is associated with days when depositors had no problem accessing their dollar deposits from the banks. This is now a distant memory, as long lines at the banks re-emerged in 2016, after physical dollars predictably ran out.

An already bad currency situation took a turn for the worse last month, after an October 1 monetary policy statement by central bank governor John Mangudya seemed to herald the end of the bond note fiction.

This precipitated the collapse of the bond note and real time gross settlement (RTGS) value on the black market, triggering price hikes and the country’s worst economic crisis in a decade.

As any opposition party would, Nelson Chamisa’s MDC Alliance, still smarting from its July 30 election defeat in yet another disputed vote, has seized upon the crisis to heap coals on President Emmerson Mnangagwa and his ZANU-PF government.

But, what would the MDC Alliance do to deal with the currency crisis, had they won the vote?

In its 2018 election manifesto, the MDC Alliance identifies two sources of the currency crisis; lack of confidence in the ZANU PF government and excessive government spending.

The party proposed the following urgent interventions to address the situation, in the short-term:

If some of the MDC Alliance’s proposals sound familiar, it is because their variants appear to have been adopted by government.

There are even striking similarities in language.

Where the MDC Alliance manifesto calls for ‘returning to and strengthening the regime of multiple currencies’,  the central bank’s October 1 monetary policy statement was announced under the theme ‘Strengthening the multi-currency system for value preservation and price stability.’

To be fair, this has been a running theme for the central bank since governor John Mangudya’s May 4, 2016 policy statement on tackling the currency crisis.

A decision by central bank to separate foreign currency deposits from bond notes and electronic Real Time Gross Settlement (RTGS) has been widely blamed for the uncertainty that has hit the currency markets.

However, the MDC Alliance in fact had a similar proposal to ring-fence US dollar balances.

The MDC Alliance manifesto does not carry details of its ring-fencing policy, but in earlier pronouncements, the party’s economic policy supremo Tendai Biti laid it down elaborately.

“All bank balances existing right now must be closed and ring-fenced in USD terms, so that the government knows that we owe the people of Zimbabwe four billion or five billion dollars, and they will be able to monetise that money, return that money in the USD form that it was deposited, when the economy gets back to its feet,” Biti said in an October 25, 2017 ‘state of the economy address’.

It is debatable which of the ring-fencing proposals would be more palatable to depositors. Biti’s proposal would have depositors hold out hope that a government, which is already US$17 billion in debt, will eventually make good on an additional US$9.5 billion debt. The Mangudya policy, on the other hand, effectively shorted the unofficial local currency and eroded depositor value.

The Biti proposal is similar to the Confederation of Zimbabwe Industries (CZI) submission to government, which has the following three options:

The Bankers Association of Zimbabwe (BAZ), in an advisory note to the central bank ahead of the October 1 policy statement, also proposed the separation of forex accounts from the unofficial local currency deposits.

“The Transitional Stabilisation Programme also recognises the need to protect depositors who retained hard currency balances with the banking system against erosion of value arising from prevailing transactional premiums over RTGS balances,” reads the Ncube-inspired economic blueprint, which will anchor government economic policy until December 2020.

This, the blueprint says, will be undertaken through designating bank deposit balances as follows:

Intriguingly, the rebasing of the economy is yet another similitude between the MDC Alliance manifesto and government policy.

“To the extent that data has been compromised and to the extent that there are many aspects of the Zimbabwean economy that are shadowy in nature and unaccounted for, the MDC Alliance will, in the first six months, undertake to rebase the economy in key material respects,” reads the manifesto.

Scrapping the bond note would, without doubt, be a popular measure.

The introduction of the pseudo-currency in November 2016 was a deeply unpopular, desperate act of subterfuge by a government which refused to address the underlying causes of bank note shortages. The bond notes have not helped ease the shortages, only compounding the problem by undermining confidence and providing yet another platform for arbitrage.

A September 2018 survey by Afrobarometer found that, while 42% of the polled Zimbabweans would readily accept the return of a local currency, only 2% backed the bond note.

But de-commissioning the bond notes would be no more than a symbolic gesture prompted by a misdiagnosed problem.

As of August 2018, bond notes worth $461 million were in circulation, making up 4.71% of money supply. As a consequence, their removal would not resolve the real problem, which most analysts identify to be the stock of electronic deposits amounting to nearly $9.5 billion that are not backed by reserves.

Further, the removal of the bond notes, with nothing to replace them, would affect transactional convenience, particularly in the low-income segment of the economy, where the notes are used for everyday transactions such as payment for transport and other goods and services at the bottom of the pyramid.

“It is important, however, to note that bond notes constitute only 4.15% (at the time) of money supply and therefore the major destabilising effects relate to swirling RTGS balances and Treasury Bills, as driven by high fiscal deficits,” said the Bankers Association, weighing in on the debate.

The MDC Alliance says it recognises that in the long term, it is not sustainable for Zimbabwe to continue to use multiple currencies as legal tender. The US dollar, the party says, contributes to the economy’s high cost structures, undermining the country export competitiveness.

In the long run, an MDC Alliance government would seek to join the Common Monetary Area (CMA), widely known as the rand union, which includes South Africa, Namibia, Swaziland and Lesotho.

“The importance of this decisive decision is that it will allow Zimbabwe to use a cheaper, enforceable and convertible currency, the Rand. It will allow the devaluation of the cost structure of the Zimbabwean Economy,” the MDC Alliance says.

Zimbabwe would issue a new Zimbabwean dollar that will be pegged to the Rand, according to the policy proposals.

Any Zimbabwean government, ZANU-PF or MDC Alliance, has to contend with the structural problems in the country’s economy, which translate into an extremely weak external position.

The country has shipped out as much as US$30 billion in payments for imports since dollarisation in 2009. This is largely due to low domestic output, as the country is yet to recover from the devastation of commercial agriculture. The adoption of the US dollar in 2009 also rendered local manufacturing uncompetitive and an import deluge inevitable. 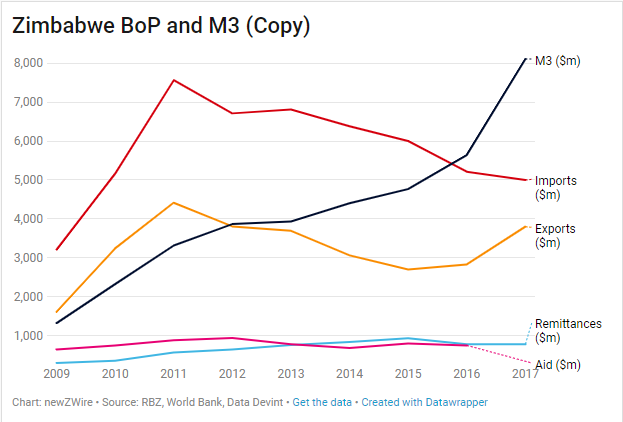 A big part of the currency crisis stems from the country’s wide trade deficit. The MDC Alliance projections, under its government (below), show the trend persisting for another decade. 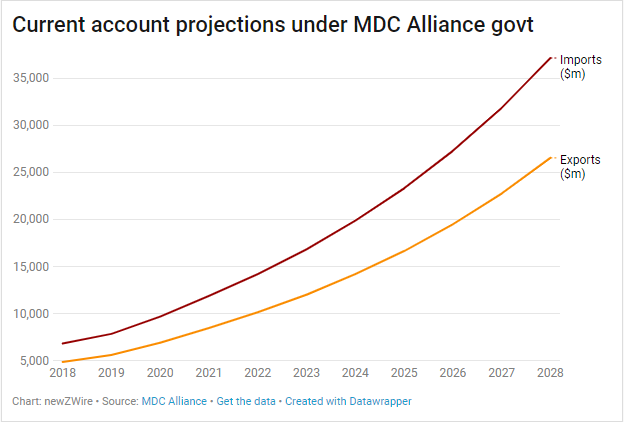 A marked difference, however, is that an MDC Alliance would rein in expenditure, with the manifesto projecting a balanced budget from 2019 to 2028. Government’s unrestrained expenditure is also a major contributor to the currency crisis.

It is an indictment on ZANU-PF that Somalia, which collapsed in 1991, has somehow sustained a monetary system throughout brutal civil strife and rampant counterfeiting by warlords, while peace-time Zimbabwe has suffered multiple currency crises since 2000.

While ZANU-PF and the MDC Alliance proposals for fixing the currency crisis broadly align, there is a stark contrast in terms of the confidence the populace has in the rival parties’ capacity to deliver on the economy. This is a point Biti frequently makes.

“Modern economies function on the basis of confidence, in Zimbabwe we don’t have trust. If you look at the economic fundamentals up to the election of July 2013, and if you look at the policies which were implemented after the collapse of the GNU, the policies are more or less the same,” Biti said in his October 2017 address.

ZANU-PF, after all, has pulled off the incredible feat of mismanaging the country into two inflation crises within 10 years.

The MDC, on the other hand, is, rightly or wrongly, widely credited with a period of economic growth and stability when it shared power with ZANU-PF between 2009 and 2013.

It is an indictment on ZANU-PF that Somalia, which collapsed in 1991, has somehow sustained a monetary system throughout brutal civil strife and rampant counterfeiting by warlords, while peace-time Zimbabwe has suffered multiple currency crises since 2000.

For any currency reforms to succeed, the public needs to be confident that their money will hold its value.

Another pre-election survey by Afrobarometer found that 42% of respondents thought MDC Alliance leader Chamisa would do a better job at creating employment than ZANU-PF leader, Emmerson Mnangagwa, who had the backing of 32%.

That Chamisa, whose grasp of the economy is passable at best, polls better on the subject than the supposedly pro-business Mnangagwa in the job creation stakes shows how little faith ZANU-PF enjoys.

Confidence is a big part of any currency and would probably help the MDC Alliance along, but the deep structural problems in the economy require much more than sentiment.