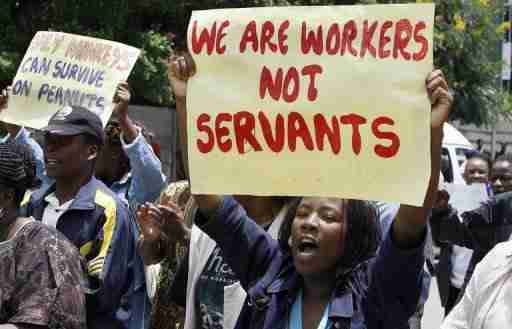 Public sector workers have rejected a government offer of ZWL$180 million in added pay for the July-December period as inadequate in the face of soaring inflation, a union official said.

Zimbabweans are angry as a year-on-year price jump of around 100% has eaten the value of their wages and savings, recalling the horrors of hyperinflation in 2008.

Thomas Muzondo, deputy chairman of the Apex Council, a group of public sector unions, told Reuters the government’s offer would see each of the 309,000 civil servants receiving only an additional ZWL$97 Zimbabwe dollars a month.

That amount would buy less than 20 litres of petrol at a service station. The lowest paid government worker earns 430 Zimbabwe dollars a month, enough to buy a vehicle tyre.

“We totally rejected that offer so they (government negotiators) will go back to their principals for further consultations,” Muzondo told Reuters.

“It was a total waste of time.”

He said the full Apex Council would meet in the capital Harare on Wednesday to decide its next step.

The Zimbabwe Congress of Trade Unions threatened “mass action” last month after the government made the RTGS dollar the sole legal tender and renamed it the Zimbabwe dollar.

Ncube has said the government is running monthly budget surpluses since January, the first time in years that state finances have not been in the red, and a sign that authorities have cut down borrowing.

Ncube previously promised to cut the budget deficit this year to 5% of GDP from 11% in 2018.

ZW VIEW | ‘Chibabest’ Chasi cannot solve the energy crisis, but he must communicate...