THE Zimbabwe Stock Exchange hit its highest level since dollarisation on Wednesday, as investors seek a home for their money amid exchange rate volatility and inflation fears.

The main industrial index hit 593.82 points, up 15.96 percent from Tuesday. The previous record high was 534.17, which was recorded on November 14, the day before the coup that toppled Robert Mugabe.

Investors hunted for any stocks available, and no counter traded lower as a total 28 stocks rose. Shares worth $20.4 million were traded, with an investor buying $18.2 million worth of Delta stock in a block deal of five million shares. Earlier Wednesday, Delta reported record sales of its lager beers, but cautioned that foreign currency shortages had caused some supply disruptions of products.

The stock market has now risen 78.31 percent since the start of the year.

The current bull-run mirrors the surge seen on the ZSE last year, which began in the third quarter of 2017, when investors drove up shares over fears of loss of value in their local currency deposits. Now, just as then, investors eager to dispose of their bank balances are buying up assets such as shares to hedge against rising prices and currency uncertainty.

The highest riser on the ZSE this year so far is Zimplow, which is up 241 percent, helped by record sales of its farm implements and construction equipment. 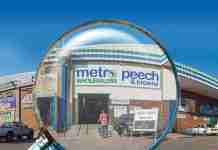