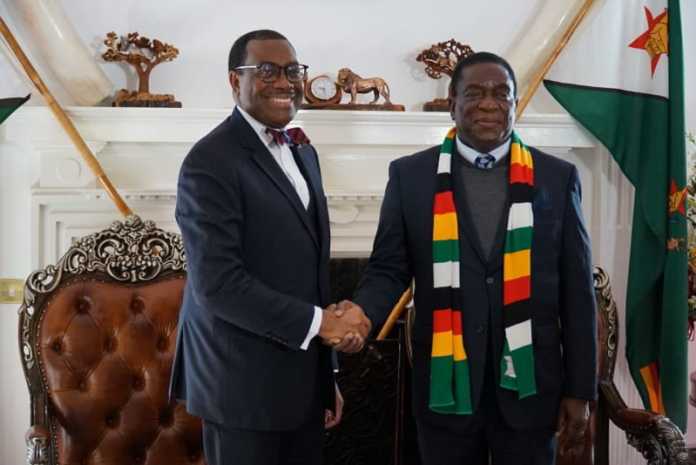 His flight from Addis Ababa to Harare had been delayed due to heavy fog, he said. He had to be patient for several hours, waiting for the weather to clear. He saw it as a metaphor for the job at hand.

“As I told the President when I arrived to see him very early this morning, I said, you know, when you have fog, it clears,” Adesina said. “If the fog clears, the arrears will clear.”

The Government has asked Adesina to be Zimbabwe’s “champion” in negotiating a debt deal with creditors.

To clear its arrears, Zimbabwe will have to make tough economic and political changes. It is an almost impossible job, but Adesina, who jokes that he is “an honorary Zimbabwean” having worked here before, says it must be done.

“It is about the people of Zimbabwe. They have suffered long enough – for two decades now. When you look at the situation today, 40% of the country’s population live in extreme poverty. We must change that and create new hope. I believe that it is time to reinvigorate, and re-dynamize the country’s economy because it is critical for the Southern African community,” he says.

Zimbabwe had seen some economic recovery in 2021, but sustained growth is not possible as long as the debt remains, Adesina said.

“You cannot run up a hill with a bag of sand on your back,” he told reporters.

A look inside Zimbabwe’s debt clearance strategy plan, the “Arrears Clearance, Debt Relief and Restructuring Strategy”, shows the fog could not be heavier.

At the end of 2021, Zimbabwe was in “debt distress”, government admits, with an “unsustainable Public and Publicly Guaranteed (PPG) external debt overhang amounting to US$14.4 billion”.

According to the report: “The country has been unable to meet its debt servicing obligations and has, therefore, been accumulating external debt arrears since 2000, which are now estimated at US$6.6 billion as at end December 2021.”

It could get worse, soon. There is US$1.5 billion in debt that matures from 2021 onwards. If that is not restructured, it will add to the arrears. Zimbabwe’s proposal for this debt is a grace period and longer-term maturities, “to avoid accumulation of arrears after the implementation of an arrears clearance strategy”.

Zimbabwe is exploring several options on its debts.

First, the plan proposes having the country declared a Highly Indebted Poor Country (HIPC). According to the World Bank, HIPC status comes only after “a track record of reform and sound policies” directed by the IMF and the World Bank.

While HIPC is in the strategy document, Treasury Secretary George Guvamatanga recently told the Business Times newspaper that government will not go the HIPC way, preferring instead a “hybrid strategy that is fit for purpose”.

Apart from HIPC, the debt strategy proposes another option.

“This entails a combination of using Zimbabwe’s own resources, and bridge concessional loans from bilateral development partners,” the plan says.

In his role as debt champion, Adesina will have to negotiate with powerful governments hostile to Mnangagwa’s government. The US, which has named Zimbabwe among foreign “adversaries” that threaten its foreign policy, has stated that it is opposed to the use of funds from international finance institutions to clear Zimbabwe’s debts.

But debt clearance plans have worked for Sudan and Somalia, both more politically fragile, emboldening Adesina.

He adds: “Circumstances are different obviously, but President Mnangagwa has made a clear commitment to engaging with the international community. A new reinvigorated Zimbabwe is good for everybody.”