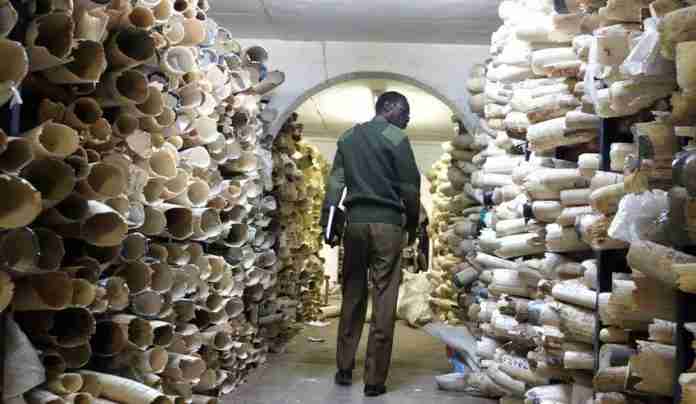 Zimbabwe may consider withdrawing from the Convention on International Trade in Endangered Species because the organization won’t allow it to sell its ivory stockpile.

The southern African nation with the world second-largest population of elephants has a stockpile of tusks worth an estimated US$300 million and needs the revenue, Fulton Mangwanya, director-general of the Zimbabwe Parks and Wildlife Management Authority, told lawmakers in the capital, Harare on Monday.

While CITES has banned international ivory sales to curb poaching, frustration is growing over the fact that “other countries are prescribing how we should handle our animals,” Mangwanya told a parliamentary committee on environment and tourism. Withdrawing from CITES would have the support of neighbors Botswana, Zambia and Namibia, which all have large elephant populations of their own, he said.

In recent years, Zimbabwe has raised money for conservation by selling elephants to China. The size of the population, estimated at 84,000, is twice what can be supported by available food and land, according to the government.

Botswana last month lifted a hunting ban on wildlife because it says it has too many elephants, which destroy crops and sometimes kill people.

The last once-off commercial sale of stockpiles of elephant ivory from Botswana, Namibia, South Africa and Zimbabwe that CITES allowed was completed in 2009. Most of the tusks went to China and Japan.

“Countries like Japan are supporting us, China is dilly-dallying, I’m not quite sure why, but they are the ones that want our ivory,” Mangwanya said.

In May, leaders of Botswana, Zambia, Namibia and Zimbabwe met in Kasane, Botswana, to decide on how to push for the ban to be lifted, so that they can be allowed to sell ivory stockpiles to fund conservation and to be able to manage growing elephant herds.

Southern Africa is home to the largest number of elephants, numbering almost 300,000. The Kavango-Zambezi Trans-Frontier Conservation Area, astride the five countries, holds 75% of the elephants.

Critics fear that allowing the sale of ivory stocks will fuel demand and increase poaching. There are also concerns over the possible diversion of ivory sales earnings, in a country where high level officials have previously been accused of a hand in poaching and in the alleged theft of ivory stocks.

CBZ the latest company to close down branches over COVID-19