Stockbrokers in Zimbabwe are struggling to explain to investors after the government shut down the stock exchange.

The Zimbabwe Stock Exchange announced Sunday it was suspending trade to comply with a directive issued by the Information Ministry late Friday that the bourse close. It’s the latest in a series of measures the government has implemented to try and stabilise the nation’s currency.

Traders have been inundated with calls from “shocked and stressed” investors all morning, Thedias Kasaira, managing director at Imara Edwards Securities, said Monday.

“Clients are asking and we don’t know what to tell them,” he said. “They want an explanation, but we haven’t been able to give one as we also don’t know the reason.”

Stock market investors have used the domestic bourse as a haven from the country’s collapsing currency and inflation of 786% — the highest rate in a decade.

Investors with cash in Zimbabwe prefer to buy shares to avoid their money losing value. Movements in domestic stock prices track the parallel currency markets on the streets, where the Zimbabwe dollar changes hands at about 100 per U.S. dollar, compared with the official rate of 57.35.

“People are looking at a hedge against inflation; that’s why they are switching from Zimbabwe dollars to equities,” said Lloyd Mlotshwa, head of equities at Harare-based IH Securities. “The stock exchange serves as a proxy to parallel market rates.” 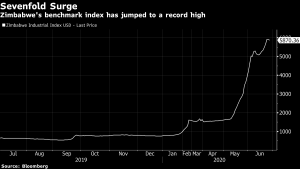 On Friday, government said it would suspend mobile money and the stock exchange, linking them to the collapse of the Zimdollar.

“Government is in possession of impeccable intelligence which constitutes a prima facie case whereby the phone-based mobile money systems of Zimbabwe are conspiring, with the help of the Zimbabwe Stock Exchange, either deliberately or inadvertently, in illicit activities that are sabotaging the economy,” the government said.

On Saturday, RBZ toned down on the measure, applying restrictions only on mobile money agents and some merchant transactions.

The ZSE has been suspended before. In November 2008, trade on the market was halted after RBZ governor Gideon Gono said the RTGS payment system was an “active vehicle for illicit foreign exchange parallel market dealings”.

The stock market only reopened in February 2009 after the economy moved to the multicurrency system.