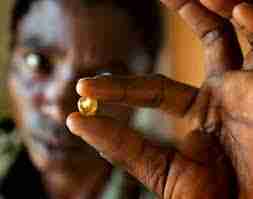 A move by the United States to bar Marange diamonds on the basis of “forced labour” has surprised even the activists working to have Zimbabwean diamonds blacklisted, and could undermine the credibility of genuine demands for transparency in the sector.

On Tuesday, the United States Customs and Border Protection (CBP) announced that it had detained a diamond shipment from Zimbabwe’s Marange mines, saying it had obtained information that the gems had been produced using forced labour.

Farai Maguwu, head of the Centre for Natural Resource Governance (CNRG), which has campaigned for years against human rights abuses by diamond mining interests in Marange, said he was not aware of any forced labour in the diamond fields.

“I wish to make it clear that as leader of one of the organisations doing human rights work in Marange, we are not aware of cases of forced labour in Marange. This is mainly because artisanal miners go to Marange voluntarily,” Maguwu said on Wednesday.

Maguwu’s CNRG is part of the Process Civil Society Coalition (KPCSC), a coalition of global rights groups lobbying for a new definition of conflict diamonds that could restrict market access for Zimbabwean gems.

At meetings of the Kimberley Process in India earlier this year, KPCSC lobbied for a new definition of blood diamonds that would include reference to “public security forces or private (including criminal or mercenary) armed groups”.

“To some, this may all sound like old news”, Maguwu told that meeting in India. “But for affected communities, it remains today’s tragedy.”

Maguwu and KPCSC have this year lobbied the United Nations to have Zimbabwean diamonds declared illegal. However, even he is surprised at claims of forced labour in the diamond fields.

“We have raised serious concerns with human rights of artisanal miners and the wider Marange community but in our analysis these do not amount to forced labour. Our work is guided by high ethical standards and as such we would never issue unverified information,” Maguwu says.

US law bars the importation of goods made using forced labour, which includes production by convicts, slaves, children or forced labourers. The International Labour Organisation (ILO) defines forced labour as “all work or service which is exacted from any person under the threat of a penalty and for which the person has not offered himself or herself voluntarily.”

By the CBP’s own admission, it does not need concrete evidence of forced labour to take action. According to the agency’s website, it can act when “information reasonably but not conclusively indicates” that merchandise was made from forced labour.

To get its information, CBP says it uses “news reports and tips from either the public or trade community” in addition to its own investigations.

For activists pushing for more transparency in mining, the CBPs’ move could be a setback. Through pressure, government has recently agreed to measures to end years of opaque dealings in the industry.

“Our government loves excuses, and this just gives them reason to say ‘we can’t work with you (civil society) if you’re calling for such measures on the country,” a lawyer who is part of a group working for mining community rights tells newZWire. “It’s a puzzling decision because this (forced labour) has never come up. We had made some progress on pushing for transparency. We are pushing for implementation.”

Over the past year, Zimbabwe has agreed to move towards the implementation of the Extractive Industry Transparency Initiative (EITI), a global industry standard that will compel more disclosure on mineral earnings. Government has also been pressured into reforms on the modernisation of the mining title administration system, including the mining cadastre system that would clean up Zimbabwe’s messy mine claims registry.

The Zimbabwe government says the CBP must put up the evidence of forced labour.

“We have commercialised diamond mining in Marange, we have commercial companies that are into extraction, cutting and polishing of diamonds, and all our diamonds are sold through the Minerals Mining Corporation of Zimbabwe,” said deputy Mines Minister Polite Kambamura.

The latest US measure was an unexpected escalation in its war against Marange diamonds. In 2010, the influential New York-based Rapaport Diamond Trading Network instructed its members to boycott the Marange stones, citing alleged human rights abuses.

Then a year later, on December 9 2011, the US Treasury Department’s Office of Foreign Assets Control (OFAC) imposed sanctions on Marange Resources and Mbada Diamonds – two companies in which the state-owned Zimbabwe Mining Development Corporation (ZMDC) had interests.