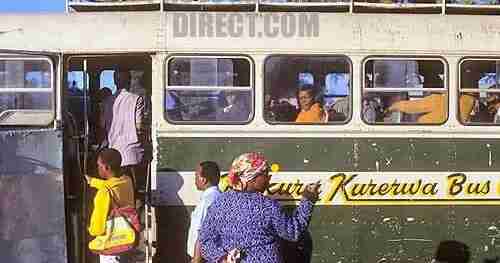 While driving down in the Lowveld one day, I saw what looked like the shell of an old abandoned bus on the side of the road, somewhere near Chiredzi, towards Hippo Valley.

“It must be a Shu Shine Bus,” I laughed to myself.

And, oh, the glamour. In the 1990s, some of these chaps started installing funny hooters on their buses that played noisy tunes as they roared into the bus rank. In the rural areas, they say everyone knew which “number” bus was approaching, by its schedule, and even by sound, before the bus even appeared.

I remember the times we were shipped off to Triangle on the early morning Shu Shine bus, which passed through my hometown Kwekwe on its way from Gokwe, heading to Chiredzi. God help your eardrums if you found a seat under the speaker.

Inevitably, there would be that one guy that would, at every stop, buy boiled eggs and – much to everyone’s obvious inconvenience – fall asleep. An egg at Amaveni Bus Stop in Kwekwe where we boarded. Sleep. Another at Kudzanai Rank in Gweru. Sleep. An egg at Shurugwi. More sleep. Oh, are we at Mhandamabwe now? Egg. Ngundu? Egg. Some more sleep. Until you drop off at Masimbiti stop near Triangle, and you wave the bus away, pitying all left on board.

That was the “chicken bus” and it was a big industry. Now, where did it all go?

How come none of those big names went on to become large, successful logistics corporations? What went wrong? There is no easy answer to this.

Transport was always the go-to business for black entrepreneurs, from way back in the day. Like, as way back as 1912.

While rummaging through the National Archives in Harare, I came across the story of one “native” called Chanakira. He set up a wagon service back in 1912 to transport farm produce from Seke to Salisbury.

Since then, mabhazi became the one business that our people ran to, given limited options in colonial Rhodesia.

I have read about the likes of Bernard Vito and Isaac Samuriwo, the dude that was first to live in Marimba Park, which was set up as a ‘suburb’ for a black elite in the 1950s. Many blacks thrived in the bus business well into the 1970s, even as the war happened. Many lost a lot to the war. One Josphat Ruredzo lost most of his buses during the war, and had to shut down.

The 1980-90s were boom times. And yet, none of these famous bus names ever really amounted to much in the end. Where are they now?

Cannibalised shells of old buses now lie strewn around all those many seemingly abandoned ‘bus depots’ on Willowvale Road.

The reasons for this failure are many – not least the small matter of the economy tanking.

But maybe it’s the “Nhingi and Sons” plague. Once the founder and patriarch died, their business seemed to go with them. The companies are left deep in debt, and the “sons” seldom carry the business forward. Instead, they often go about stripping it all down.

What should happen for these “sons” to push the legacy of their fathers forward, to grow those businesses and modernise them? Did they not learn the trade? Or were they only taught to consume? Or perhaps the rest of us, looking from the outside in, have no idea how this thing really goes?

AVM, the company that had manufactured local buses and even exported some, went under. A change of ownership couldn’t reverse the decline.

One has to wonder; when our people went into this bus business, why did they always insist on the bus plying routes to their rural home areas? Where was the basic law of going where the demand was?

You got Tanda Tavaruva hitting Masvingo, Chikozho and Magwizi into rural Masvingo, the Shu Shine guys into the Midlands, another guy to his village in Chipinge. Was it they did not always consider where the routes were most commercially viable? I do not know.

No. People kumusha have GOT to see my buses. Because, how else could they know I have buses? Even if, in some cases, the route to Chamakondo is barely viable.

You see it still today. Brothers jumping on every new ‘entrepreneurship’ wagon because, well, ‘they must see me’. He will go into every business that’s trending today – yah, let’s all have car sales; let’s sell gold, let’s go into tobacco too this year.

Two weeks after the brother has declared that he’s starting a business, he’s on the hunt for the biggest wheels. He must throw the biggest, wildest, all-white poolside parties at his rented house in Glen Lorne. Because he must be seen.

If he never threw big parties, how else could we ever know he is in business?

Have we learnt nothing from that Shu Shine bus, on the side of the road, broken down somewhere near its owner’s village?

ALSO READ | The Machipisa philosophy: ‘Only successful people can talk to me about money”