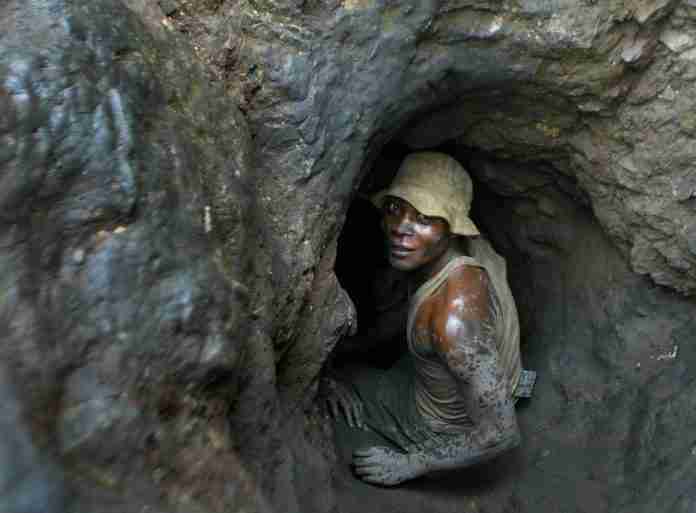 The Zimbabwe government likes to tell us that rising gold output from informal mining is a good thing, but the dozens of bodies floating inside a mine shaft near Kadoma today suggest that it isn’t.

On Tuesday night, dozens of illegal miners were working the shafts at Cricket Mine at Battlefields, when a dam collapsed and flooded the mines. Some 48 hours after the flooding on Thursday, water pumps were still roaring at the site as desperate efforts turned from rescue to recovery. At least 38 people are feared to have drowned.

With the water reaching the surface, there was little chance of finding survivors, according to Mhondoro-Ngezi administrator Fortunate Muzulu, speaking at the site. Equipment was being mobilised onto the mine to try and drain the tunnels and recover the miners. Hundreds of other illegal miners and grieving relatives swarmed the area during the grim operation.

Below the area’s red earth, in a warren of tunnels and shafts running up to 100 metres deep, lie the bodies of the sort of miners from whom Fidelity Printers and Refiners, the gold buying arm of the Reserve Bank of Zimbabwe, is buying gold.

Eager to boast of rising gold output, and in the scramble among the elite to personally profit, the government is not asking how this gold is being produced, or how many are dying producing it.

In 2018, the country produced 33.3 tonnes of gold. The bulk of this, 21.67 tonnes, was produced by small miners. A lot of it was bought from miners and middlemen who have been producing gold from dangerous, abandoned mine shafts, where safety measures are ignored and violence and killings come standard. Police are powerless to act.

Politicians are filing to the site of the Battlefields mine tragedy to act shocked, but they know that this incident is not isolated. Many such collapses have happened over recent years. Many have gone unreported.

If the miners are not being buried in the old shafts, they are killing each other in machete wars for territory and ore. In the Midlands alone, 14 people were killed in violence between rival gold gangs between January and November 2018, according to the Ministry of Home Affairs.

Two Members of Parliament from Kwekwe, Masango Matambanadzo and Settlement Chikwinya, however believe the number to be higher. The violence worsened in 2018 when local ZANU-PF politicians allowed gangs of makorokoza into Gaika Mine, owned by Duration Gold, despite a court order protecting the mine.

At Gaika, deaths from rock falls are not uncommon. In December 2018, the body of a miner lay abandoned under a large rock for weeks; nobody would waste dynamite, tools or time to move the boulder.

While mine collapses are rising, rescue operations remain poor. In the latest incident, none of the nearby mines had pumps large enough to drain water quickly. Those pumps that were on site had to occasionally stop operations because of power cuts, partly caused by the storms.

“We need to be ready always, since now we have small scale miners mining everywhere,” he said, while monitoring operations at the mine. “We have taken about two days to react, just to pump out the water.”

At times, out of fear of arrest and sometimes superstition, makorokoza bar rescue teams coming from large mines from interfering when a mine collapses.

With unemployment rising, and the lure of get-rich-quick stories still strong, many more are entering the field. With no safety equipment and no training in handling the explosives they use – which they buy off the black market – many of these miners face death with every venture they make below. Many of these desperate miners target old abandoned mines, where they blast the pillars that hold up the tunnels.

For the government, all this matters little. The incentive to look away is there; many makorokoza work for syndicates tied to politicians. The vast numbers of illegal miners also provide a large bedrock of votes.

For this reason, government has pampered the small-scale miners more than it has the larger producers. Formal gold producers spend significant amounts of money on safety and environmental compliance, but get less for their gold than informal miners do. Small scale miners get paid 70% of their gold sales to Fidelity in US dollars, paid out in cash. For larger producers, they only get to keep 55% of their earnings, if at all it is paid.

Millions of dollars are being sunk into artisanal mining. Over the past year, government has put up a $150 million facility for them, and set up gold buying centres across the country. Nobody at those centres asks how the gold is produced.

In addition, the government is increasing pressure on larger miners to cede claims, preserved by the firms for future expansion, to politically-linked syndicates of artisanal miners.

The impact has not only been on human life, but on the environment. In Chimanimani, Tarka Forest, a timber estate owned by Allied Timbers, over 600 hectares of prime timber have been lost to illegal miners. The Environmental Management Authority is powerless to stop mining on river banks, and doesn’t compel miners to reclaim and rehabilitate abandoned mines. Nobody in authority is ready to stop the carnage.

Zimbabwe wants to re-join the London Bullion market, which would give it better access to markets. But the LBMA’s Responsible Gold Guidance program, launched in 2012, mandatory for LBMA-accredited refiners, would make it hard to sell gold produced without regard for safety and the environment.

That would be tragic for Zimbabwe’s gold industry.

But an even bigger tragedy is the rising number of bodies in many mining shafts. Nobody in government seems to be counting the bodies; they are just counting the dollars.

Will Elders’ rebuke return to haunt the opposition?