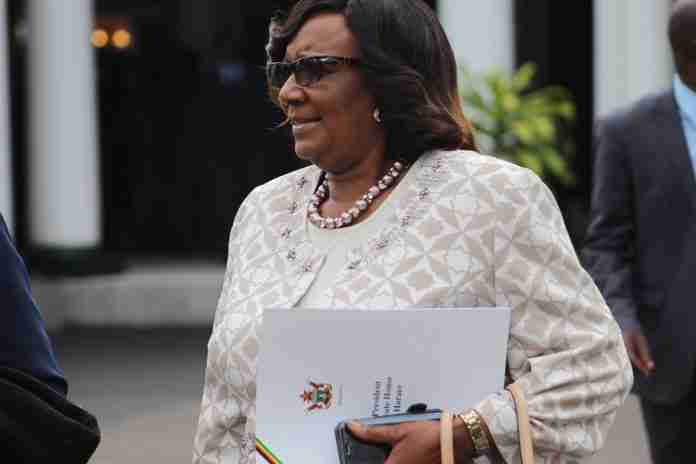 Tourism Minister Prisca Mupfumira, who is facing charges of criminal abuse of office from her time as Labour Minister, appeared in court today.

She will know tomorrow (Saturday) if an application by the State to keep her detained for 21 days is successful.

We publish below a blow-by-blow account of how it all went down during her appearance today.

The prosecution wants Mupfumira remanded in custody for 21 days.

Defence lawyer Charles Chinyama argues against the prosecution’s application for extended detention. He says Mupfumira is a high ranking public official and is of fixed abode.

Chinyama says: “If you look at count one to seven, there is no evidence against the accused (Mupfumira). The State is relying on what it calls ‘verbal instructions’. There is no paper trail.”

Chinyama: “The motor vehicle in question was purchased on the basis of a loan to the Ministry of Finance by NSSA. It is a misnomer to say there was abuse of office by the accused person. If there was any abuse, it was by the Permanent Secretary.

Chinyama: NSSA should go to government, the Ministry of Finance, for recourse. The NSSA CSR fund does not fall under her purview. NSSA is run by a board of directors. Before any money is released under CSR, it has to be authorised by the board, not the Minister.

On the US$300,000 allegedly given to Mupfumira for her political activities, Chinyama says she has a breakdown prepared by the Perm Sec, showing how the funds were used. It does not show she got a single cent, he argues.

On Mupfumira’s second ministerial SUV, Chinyama says “she is not responsible for vehicle allocation and cannot refuse what she is given by her employer.”

On the NSSA-Metbank bailout, one of the biggest charges she faces, Chinyama says the transaction predated Mupfumira’s appointment as minister overseeing NSSA. Her only involvement, after her appointment, was to mediate in a dispute over the transaction, between NSSA and Metbank, he says.

On the charge relating to NSSA’s property purchases from Metbank, Chinyama says there is no way NSSA would have done so without a resolution. “If there’s a charge to be visited on anyone, it must be on NSSA, for recklessness.”

And on the case of the US$62m Treasury Bills placed with Metbank, Chinyama says: “A corporate body, such as NSSA, is in no position to take verbal instructions. None of this was for the accused person’s benefit. What we have here is a purely civil matter between NSSA and Metbank.”

Chinyama goes in hard on the prosecution: “What we have in the end is a huge figure of US$95m, but it can’t stick on the accused. She’s too smart for it. We have a case here where fogures are thrown into the air in the hope that they will stick.”

After this, the prosecutors and defence lawyers joust for a while over a certificate for further detention placed before the magistrate. In terms of the Criminal Procedure and Evidence Act, prosecutors may seek to extend detention to 21 days.

Mupfumira’s lawyers then argue that Section 32 of CP&E Act are rendered void by Section 50 of the Constitution, which they say provides for mandatory bail.

Prosecutor Reza says ZACC and police are still struggling to trace Mupfumira’s transactions. “She has hidden the money very well.”

But Reza says they have a smoking gun: There are, however, five instances of NSSA transactions where the payee is ‘P. Mupfumira’, he tells the court.

Reza adds: “The police have proof of payments from NSSA to Metbank, and suspicious payments to the accused’s companies. ZACC is still investigating the final destination of these amounts.”

Reza: There are two principal actors, the accused and Metbank. Metbank is deeply embedded in all these transactions. Metbank was in dire straits, and the accused directed NSSA to buy four properties at inflated prices from Metbank. Immediately afterwards, Metbank was fluid.

Magistrate Mutevedzi then tells the court that he will rule on the State’s application detain Mupfumira for a further 21 days at 10am on Saturday, July 27.

The minister will spend another night in custody, magistrate rules.